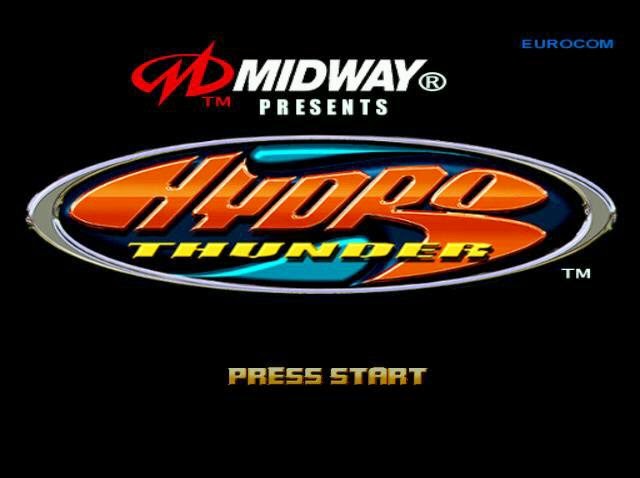 The glorious Dreamcast days were my last as a happy current-gen gamer but they were tremendously enjoyable while they lasted. This was partly because, unlike the Saturn, there were plenty of top-quality racing games available on Sega's final console, and one that I spent rather a lot of time with was Hydro Thunder, the first of Midway's short-lived 'Thunder' series. As suggested by the name, however, it's a game that features water-based vehicles rather than road-based examples, specifically powerboats. You take on the role of an unnamed 'international boat racing' champion who longs for a new challenge only to receive an invitation from the mysterious H.T.R.A. - the Hydro Thunder Racing Association. This 'underground clan of adventurous racing renegades' don't invite just anyone into their ranks either, so you'll have to work hard to earn their respect...

In keeping with its heritage, Hydro Thunder is an arcade racer in the purest sense of the word. There are few options to distract you and the only choice as far as play modes is concerned is limited to either a one-player or two-player race. In either case there are thirteen courses in total which are based on all sorts of waterways around the world, some in pretty obvious places, others in slightly more surprising locales, and they're divided into four groups - easy, medium, hard, and bonus. To start with only the easy courses are available which are: Thunder Park (one of only two circuit courses in the game), Lost Island (set in the South Pacific) and Arctic Circle (an icy river). Finish third or better on each of these from a field of sixteen racers and the next set of courses is unlocked: Greek Isles (winds through both modern towns and ancient ruins), Lake Powell (one of the largest man-made lakes in the world) and The Far East (race through the misty mountains of China).

If you can then finish each medium course in second place or better, you will unlock the hard courses: Ship Graveyard (set in a closed military shipyard), Venice Canals (well... you know) and New York Disaster (set in the remains of the Big Apple after it's devastated by a giant meteor). As for the last set of courses... Well, you're probably starting to notice a pattern here but if you manage to finish each hard race in first place you can give the bonus courses a try, and these are: Nile Adventure (race through ancient pyramids and narrow waterways), Hydro Speedway (the second circuit course), Catacomb (race through caverns filled with wrecked ships and sharp rocks) and Castle Von Dandy (set around an abandoned Scottish castle). So quite a variety all in all, I'm sure you'll agree, and most of them are packed with all manner of crazy features and obstacles, and a good few short-cuts too!

To get around them, though, you'll need a boat and there are many to choose from (most of which have great names like 'Miss Behave' and 'Damn the Torpedoes'!). In much the same way as the courses, there are only three available at first but the selection increases as you unlock the various difficulties, and they come in many shapes and sizes. Some of them look like fairly normal(ish) powerboats - long, sleek and colourful - and some look more like UFO's, but they all have their strengths and weaknesses. Some are designed to fly, others for maximum speed, some are strong and heavy, others weak and light, but one thing they can all do is make use of their 'Mighty Hull' technology which is just an unnecessarily fancy name for 'boosters'. These handy devices are used by collecting the icons that are dotted around each course and there are two types - blue ones which give you four seconds of boost fuel and red ones which give you nine seconds of fuel.

You can use the boosters any time you want, and indeed it's actually essential to do so in order to finish most races in the higher positions which means grabbing the icons (some of which are moving around, hidden away, or floating above the water) should be one of your top priorities. They shouldn't be wasted either though. In addition to increasing your speed, boosting allows you to smash opponents and obstacles out of the way, and that's always handy! Another trick that all these crazy 'space boats' possess is the Hydro Jump which allows them to leap up out of the water briefly. It's not easy to master but it is important to learn as there are often short-cuts which can only be reached this way, as well as some boost icons. This all means that Hydro Thunder is very much a fast, exciting, thrill-ride - almost a gaming equivalent of an adrenaline shot - but that's also part of the problem too.

It's quite a tough game - there's a fairly strict time limit with multiple checkpoints along each course, but the bigger challenge are the other competitors. Their speed is seemingly tailored to your own so if you intentionally pootle along at a snail's pace they'll remain a short distance in front rather than speeding off into the distance, but as soon as you drop the hammer they all speed up too! The only way to beat them is therefore to collect pretty much every boost icon, rocket through the course, use the short-cuts, and make no mistakes. The latter in particular can be really annoying and is something I don't like in racing games, and accordingly here, if you miss a red boost icon or take a corner badly and end up clattered on the rocks, you might as well just quit and restart the race as there's really no point in continuing unless you're still learning the layout of the course.

The only other problem that I can find is the lack of depth. Yes, I know it's an arcade conversion so it comes with the territory, but would it really have hurt to add a championship mode or maybe even a stunt mode or something like that? As things stand, once you've won all the courses, the only reason to continue playing is to beat your course times, as well as make use of the two-player mode of course, which itself isn't that impressive since it removes all the other racers. In fact, the rather limited nature of this game could've proved rather damaging, but luckily it has one saving grace - the courses. They're all accompanied by their own tunes which are mostly very decent and often tied into the course's theme, and graphically they're really impressive too. The water effects aren't bad (although Wave Race remains the standard-setter there) but the backgrounds and scenery around the courses are fantastic, featuring crisp textures and lots of detail.

The crazy courses and their varied themes allow for much creativity too. Each is memorable and home to its own features and short-cuts, and all of them are packed with boosts, ramps, tunnels, and some veeeery big drops (luckily the game always guides you into the water below). There's always something going on - the powerful engine sounds, constant splashing and splooshing around, jostling with other boats (including tourist ferries and police boats!), a very energetic announcer... it really is a near-constant audio/visual assault which creates a rather frenetic atmosphere. The frustrating thing, of course, is that it could've so easily been even better with the addition of a couple of play modes or something. Even as it is, though, there are few racing games, road or water based, that will make an impression like this one does. You'll have to race fast and ruthlessly and you'll probably see all the game has to offer within hours, but it's an immensely fun game to blast through.