I obviously can't speak for anyone else but I was very surprised when Star Trek Voyager was announced. After so many years without any Trek TV show, The Next Generation was very welcome and proved extremely popular too, revitalising the ailing franchise in the process. A follow-up series therefore wasn't too unexpected, and Deep Space Nine duly appeared towards the end of TNG's run. But then, after only two seasons of Captain Sisko's adventures, yet another show was unveiled.

After the mixed reaction to DS9's space station-based exploits, Voyager saw a return to starship-based adventures, and for the first time that ship was not called Enterprise. Voyager was a brand new, state-of-the-art Intrepid-class ship - much smaller than most of the hulking great brutes Starfleet had in service (around 140 crew, no families/civilians) but fast and outfitted with all the latest technology and gizmos such as bio-neural circuitry and the ultra-handy EMH (Emergency Medical Hologram), and it would need every bit of help after getting stranded 70,000 light years from Earth on its very first mission! 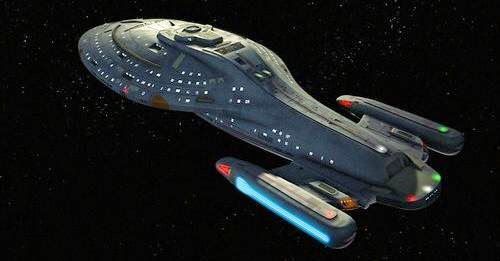 It was a pretty great idea when you think about it too - the Alpha Quadrant and parts of the Beta Quadrant had been featured extensively in The Original Series, The Next Generation, Deep Space Nine, and the movies, the Dominion-infested Gamma Quadrant had also been featured in DS9, so that just left the Delta Quadrant as the only part of the galaxy untouched by pesky humans... until now!

Indeed, shortly after stopping off at Deep Space Nine, Captain Janeway and her new crew set off on their maiden voyage. Their objective is to find and capture a Maquis vessel which is believed to be hiding in the area but both ships end up deep in the Delta Quadrant where neither they nor we know anyone or anything. And so begin their adventures including encounters with lots of new, mostly malevolent races (Kazon, Vidiian, Hirogen, Species 8472), all sorts of weird new 'spatial anomalies', and let's not forget, the Delta Quadrant is also the home of the Borg. Eeeek! 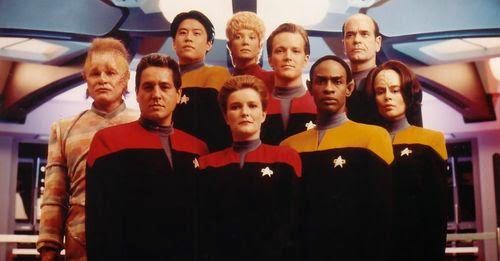 Those cybernetic nincompoops don't make any appearances this early but the first season does feature many other new wonders over its unusually meagre sixteen episodes. Aside from the five examples below, delights include B'Elanna getting a rapid promotion, those gruesome Vidiians stealing Neelix's lungs, the crew making contact with the alpha quadrant for the first time (kind of), Paris shagging an alien woman and (possibly) killing her husband, the crew hypocritically trying to steal fancy technology from a more advanced race (surely the Prime Directive works both ways guys?), the Doctor battlling a Nordic demon, Seska giving everyone attitude before betraying Voyager for the idiotic Kazon, B'Elanna getting split into her (gorgeous but meek) human and (angry and aggressive) Klingon halves, and Neelix having a hissy fit when an evil alien comes on board. Even better in my opinion, though, are the five I've selected thus: 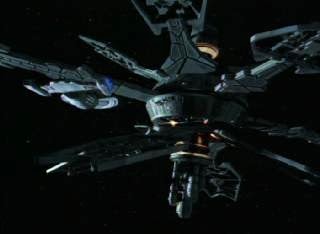 Voyager's first mission is to enter the Badlands, a dangerous region filled with swirly plasma storms, but almost as soon as the gleaming new ship gets there it's catapulted across the other side of the galaxy by some scary alien sorcery. Once there they discover that several key crew members are dead, and the rest of them are soon brought aboard a nearby array operated by an alien called the Caretaker where they also find the crew of the Maquis ship they were meant to be capturing. Once back aboard their respective ships, however, they each realise they have a crew member missing. Signs point towards a nearby planet but it's inhabited by the aggressive Kazon who also have designs on the array itself. Captain Janeway therefore has a big decision to make - potentially allow the now-vacant array to fall into the foul, dirty hands of the Kazon miscreants, or destroy it and cut off their way back to the Alpha Quadrant. Needless to say, her decision is a bad one for her crew but a great one for us viewers! I'm not personally a huge fan of either TNG or DS9's pilot episodes but this introduction to Voyager is a pretty good one. 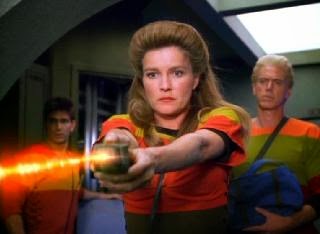 After detecting a 'polaric' explosion on a nearby planet, Voyager goes to investigate, finding evidence of an advanced civilisation but no life signs. It turns out the explosion occurred only a day before and wiped out the poor planet's entire population whilst leaving behind 'temporal anomalies', one of which Janeway and Paris get caught in, sending them back to the previous day. They now have the chance to find out what caused the explosion and perhaps even prevent it from happening. First they don the rainbow-coloured clothes that seem to be all the rage there, and then they get caught up with some terrorists who are opposed to their government's use of polaric energy. Suffice to say, even with only a day of 'time travel' involved there is still the odd temporal paradox here and there, but it's one of the less brain-twisty examples. It's also surely the first of Janeway's many violations of the Prime Directive too, but it's an entertaining episode all the same. 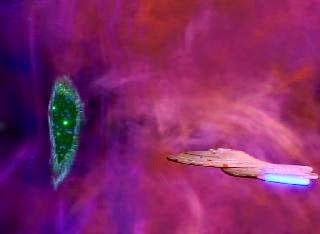 Oh dear, Voyager has encountered its first nebula. It doesn't seem to matter which Federation ship finds one of these colourful gas clouds, they always seem to cause trouble somehow. This one is of particular interest to the caffeine-powered Captain Janeway, mainly as it may be a source of coffee, so of course they enter it without hesitation only to find... their powers levels start dropping! A hasty withdrawal is therefore necessary but, after doing so, further investigation of the 'nebula' reveals that it's actually composed of organic material making it a rather large life form of some sort, and by breaching its outer perimeter they've 'penetrated' it (giggity), injuring it in the process. Guess they'd better administer some first aid then, but how in the blue blazes do you stitch up a wound on what still seems to be a pink cloud? Well, our combined Starfleet/Maquis crew may be new but they're talented and resourceful so I'm sure they'll find a way. It's not a remotely remarkable episode really though, I guess I've just got a soft spot for these mysterious 'spatial anomalies' and their predictable tomfoolery! 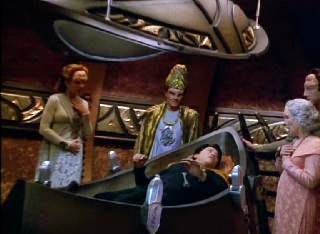 I'm not sure why but years after I watched Voyager for the first time on TV, this episode stuck in my mind more than any other from the first season. It features a lovely ringed planet (there's not enough of those in Star Trek) which may host a new element. Going down to check are Chakotay, B'Elanna, and Harry who find... a load of dead bodies. When a 'subspace vacuole' forms, however, they request an emergency beam out. Chakotay and B'Elanna arrive back on Voyager safely along with one of the dead bodies but Harry is missing! It turns out he went through one of the vacuoles and ended up in the same place that the dead bodies are coming from where he finds a highly spiritual civilisation who believe they are sending their people to the afterlife or 'next emanation'. Unsurprisingly his arrival causes concern and, as news spreads, also causes people to start doubting their beliefs. Despite the unusual premise and Trek's patchy history of religious-tinged episodes, this is actually a very nicely handled episode and even provokes further thought on the matter - surely what Star Trek was created for. 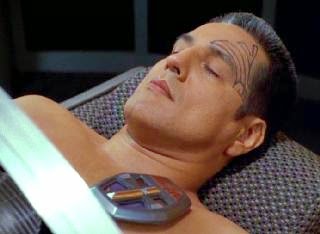 Well, it didn't take Voyager long to find another nebula and, despite their previous trouble, they still couldn't resist investigating it. This time it's a 'dark matter' nebula and, to her credit, Janeway didn't send the actual ship this time but rather a shuttle containing Chakotay and Tuvok. Shockingly, the shuttle is found soon afterwards drifting along with an unconscious Tuvok and an apparently-dead Chakotay. Of course, on discovering this, the entirely rational captain decides to send Voyager itself toward the nebula. This soon proves trickier than you might think, though, as various crew members apparently sabotage attempts to get there by changing course or shutting down the engines whilst simultaneously maintaining their innocence. Meanwhile, the lovely B'Elanna is attempting to reunite Chakotay's spirit with his body as per his Native American beliefs. This sub-plot is unsurprisingly less interesting than the main story but I found this to be a fairly intriguing episode overall, thanks mainly to the mysterious goings-on aboard the ship.

Look out for my Season Two picks soon!