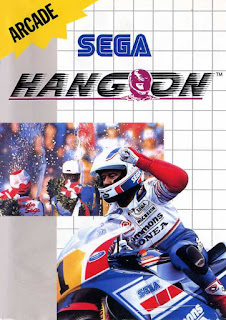 If you are visiting this blog intentionally there's a pretty good chance your days of console gaming go back as far the 80's, perhaps even late 70's. My first was Sega's magnificent Master System which remains one of my favourite systems. The version I was fortunate enough to have featured two built-in games - Safari Hunt, to make use of the bundled Light Phaser, and the mighty Hang-On for those times you don't fancy shooting poor rabbits, bears, and armadillos!

I have already taken a look at the decent arcade version here at Red Parsley but this MS version was the first one I encountered and it remains my favourite. Obviously it's taken a bit of a hit with regards to its visuals. The biker sprites are smaller and less detailed here, there are far fewer on-screen colours, the roadsides are more spartan, and it's not as fast, but it's not a bad effort all things considered. That nighttime stage still looks super cool too! The audio is more or less the same as the original, although that's mainly because the arcade version had very little - there's no in game music and few spot effects as you race. The aesthetic differences were irrelevant for me at the time anyway though, as I'd never played or even seen the arcade game. 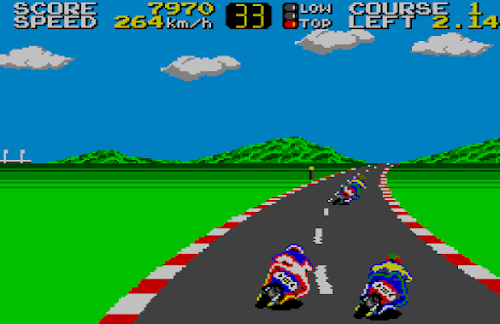 For me, MS Hang-On was a wonderful little game. The graphics are tidy and colourful and the exciting racing action provided me with many hours of fun. Like the arcade version there are only five stages here, but unlike its big brother, this version simply loops back to the start each time you finish, and that obviously means you can just keep going for as long as your skill/patience allows you. I recall being pretty good at it back then - I was able to loop the game several times, but coming back to it after all these years I found it quite a bit harder than I remember.

That's not down to the courses though - they are a little simpler here, to start with at least. The arcade version throws s-bends and tight turns at you right from the off but there's a much more gradual difficulty increase - you don't even see the first s-bend until the fourth stage. It's more a time issue here. You start with 60 seconds and you now have a handy distance-o-meter to let you know how far away you are from the checkpoint, but it's not that easy to make it. 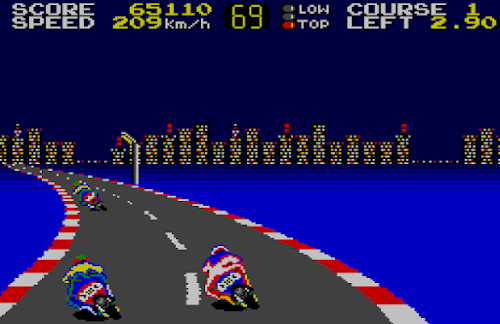 Even a flawless performance will see you make it with mere seconds to spare so any crashes pretty much end your game for the first few stages. Any time remaining when you do get there is added to the new 60 seconds for the next section though, and after a while those few extra seconds can add up, and before long you're able to take your time a little more, take sharp corners more carefully, even crash once or twice, and you can end up having some very lengthy sessions.

I can't believe it's taken me so long to come back to the game but I was very happy to find that it's just as enjoyable now as it always was. It may have taken a while to get back up to speed, so to speak, but that's true of almost any old game, and once I'd shaken off the rust it was like I had never been away. As is often the case when playing my earliest MS games again, it almost takes me back to that time, sitting on my bean bag in my bedroom in front of the TV that I had to borrow from the kitchen at weekends, racing away for hours at a time... I miss those days more and more.