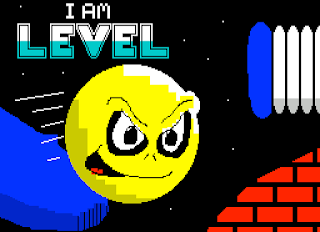 It was long ago now that I initially discovered this game - more than two years has passed, in fact. It was soon installed onto my Android phone; I played it for a while, and enjoyed it, but then my phone went and broke. It didn't take too long to replace it - how could it these days? - but my progress was obviously lost in this and all other games I had installed (which was only a few, luckily). I had originally intended to review it back then but gadzooks if it hasn't taken me all this time to finally get around to reinstalling the game (I had to buy it again, too!) and playing it through. It didn't take me long to make up my previous progress and only a little more to surpass it, so I guess it's time to resurrect that review as well. If I can remember where I put it, that is. Oh, wait a minute... 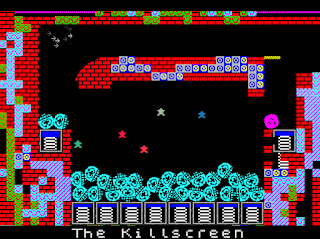 The first thing that will strike many players about this game is its ace presentation - it was designed to look and sound just like a genuine ZX Spectrum game, right down to the squiggly data lines and sounds on the loading screen, and the game itself is of a type that most Speccy gamers will be very familiar with too - a flick screen platform adventure! As simple as they often were, though, the gameplay here is even simpler. You control a ball (the magenta face in the screen-shots, although you choose from numerous 'skins') which is rolled around the screen by tilting your phone left or right, with the object being to collect all the stars on each of the 72 screens that make up the game. That may make it sound like a simple LocoRoco style game but there are more than a few differences between the games besides the rolling. 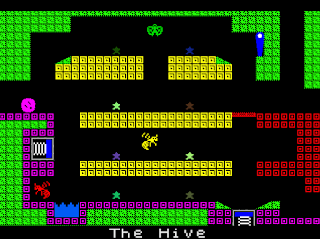 You can't jump here for one thing. Besides rolling, movement around the stages is instead achieved by making use of the many springers, flippers, and trap doors (the dark blue things). Tapping the screen will activate them and pretty much every screen is home to some combination of them. There are a few other features to be used in conjunction with these too, such as bumpers and air puffers. Care should be taken when using most of this stuff though, as most of the screens also feature enemies, a touch from any of whom will cost you a precious life. These can be near enough anything, from scary bugs to ordinary household objects, and they move in simple back-and-forth patterns, so timing your movements is key to collecting all stars on any given screen, as well as a little luck on some occasions. 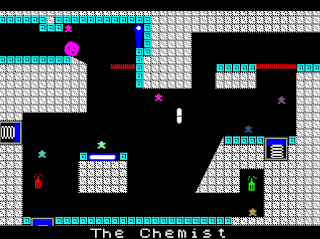 This might well all sound wonderful to Speccy fans and it very much is. The guys at Smiling Bag have done a fantastic job of capturing the spirit of the kind of platformers us owners of Sir Clive's wondrous machine spent so much of our youths playing. The same colour pallette is used and the same kind of patterns and sprites too. The only difference really is the lack of colour-clash! The audio is also authentic, with a 128k-style title screen tune and simple in-game spot effects. Best of all, though, are the screens themselves. Not only are they reminiscent of so many old Spectrum games I fondly recall but there are quite a few of them and they collectively make for a fantastic game in their own right. So much so that perhaps even non-Speccy fans might dare to venture into its unforgiving depths. 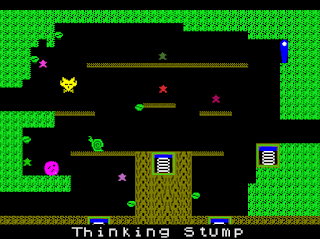 Actually, I say unforgiving but one criticism I could level at the game (no pun intended) is that it's a bit too easy. Any similar game on the Speccy would last us ages as they were unforgiving, but here we get multiple save points and unlimited credits, so if you enjoy playing it as much as I did, it won't last you too long at all. That's nit-picking really though. It's a cheap game (£1.49 at time of writing) and is easily worth that price. I wouldn't be exaggerating to say it's the most fun I've had with any mobile game while it lasted. Whether it will hold the same appeal for gamers who didn't play the type of games it pays homage to, I couldn't say, but I can say that I Am Level is a wonderful love letter to a bygone era as well as an immensely enjoyable and highly addictive dose of platforming action and comes highly recommended.