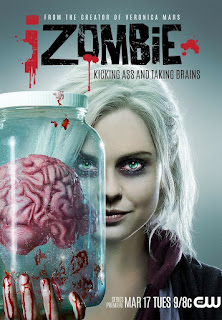 Okay, I'll just come out and say it - I really don't like zombies. I don't like zombie films, I don't like zombie shows. I think zombies are stupid. First they were stupid mumbling stumbling oafs but more recently the trend has been for zombieness to be the result of a virus/pathogen of some sort, usually also bestowing super speed, strength, athleticism, endurance, etc on the infected party. Either way, they're stupid and their films/shows are stupid too. This new show, however, takes yet another approach. Well, kind of. It's loosely based on the comic books by Chris Roberson and Michael Allred of which there were 28 issues between 2010 and 2012, but definitely only 'loosely' as about the only similarity between them from what I can see is the general appearance (though not name) of the main character. Here she is called Olivia (Liv) Moore and was until recently just a normal medical resident from Seattle. That was, until she attended a boat party and got herself infected.

So yes, here we are again in virus/pathogen territory, but where iZombie differs from the likes of Zombieland is that Liv, and indeed all the other zombies she encounters, remain fairly normal. They are cold, have pale skin, and of course have very specific nutritional requirements, namely brains, but that's about it. They still think, talk, and act more or less the same as before. To facilitate her diet, Liv (McIver) gets a job as a coroner's assistant working for Dr. Ravi Chakrabarti (Kohli) who allows her to eat the brains of the morgue's new arrivals which she uses as ingredients and adds to otherwise-normal meals, obviously. Hmmm, could I try a brain vindaloo? 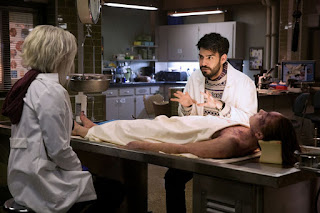 Soon after she starts eating brains however, Liv discovers that she also inherits some of the character traits of the owner and also gets periodic flashbacks, usually of the events leading up to their death. Since many morgue occupants are murder victims, she uses these 'insights' to help the police identify the killers and is soon partnered with Clive Babineaux (Goodwin), a Seattle PD detective. While she's off being Zombie PD, Ravi spends his spare time trying to find a cure for the ghastly virus. Meanwhile, another boat party attendee, former drug dealer Blaine (Anders), has also been infected and ups his criminal activities accordingly by 'creating' his own corpses to satisfy his nourishment-related desires. Soon he is running a 'meat shop' (chortle) catering to various other relevant parties. This unsurprisingly puts him on Liv's radar, as well as that of and the law enforcement authorities, and also brings him to Liv's ex-fiance, Major (Buckley), who has started investigating the missing persons... 7/10 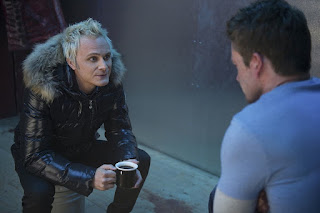 Picking up events three months on, a cured Blaine now runs a funeral home, providing a source of brains for his clients while also dealing utopium, a designer drug which has proven to be linked to the cause of the zombie virus to start with. He's not alone there though, as he has a scary-sounding competitor in the form of Mr. Boss (Eddie Jemison) who tries muscling Blaine out. Liv is still doing her thing too, working a few murders with Det. Babineaux, helping out Ravi at the morgue, and of course chowing down on lots of lovely brain salads and pizzas and stuff, while Ravi himself has mixed success on his cure (on which he seems to spend more of his time than his actual job), and Major has gone into the zombie-killing business, or so it seems. We also get a treat this season with the appearance of Blaine's estranged father played by Robert Knepper (Prison Break's T-Bag)! As you might imagine, this season also leans more towards serial story elements and characters as opposed to one-off individual stories, and it looks like we're heading in an ominous direction... 7/10

Given the opening paragraph to this feature, you might wonder why I even bothered watching this show, but it wasn't actually my choice really. I didn't fancy it upon seeing it on Netflix - I actually thought it looked/sounded stupid - but my wife, who does like this kind of thing, decided she, and by extension me, would watch it. But despite my initial fears, it actually turned out to be okay, perhaps even good!

There is a lot that's silly about it - the fact that the zombies all look and act totally normally apart from having slightly pale skin (and black eye make-up in Liv's case), for one thing. You don't even know who's a zombie and who isn't to start with, but as we soon discovered, they can occasionally get all freaky and super-strong under extreme stress (complete with glowy red eyes). Not that it happens often though, and for a vast majority of her screen time, Liv just appears to be another normal, if rather sassy TV hotty. The super-convenient brain flashbacks that Liv has are also silly, but it's also a fun show and filled with some likeable characters. As pleasant as McIver/Liv is though, the standout for me is David Anders whose Blaine is charming and charismatic, but also gets most of the best lines and most violent scenes.

So, pleasantly surprised then... I wouldn't say the story got its hooks into me like the best shows do but it's enjoyable enough, certainly for a stupid zombie show (chortle!). There is apparently a third season on the way too, and I'll probably also end up seeing that, voluntarily or otherwise, so this won't be a 'final thought' for long, but at least I won't be dreading it this time! As long as Blaine is back to his old self it should be pretty cool. It also wouldn't hurt to see Liv back in her superhero costumer either (Google it). Tee hee!