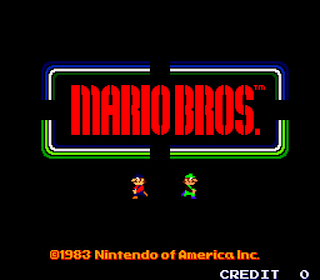 Despite being among the most well known video game characters of all time, some people are still unaware of Mario's earlier exploits. His first appearance was of course as the heroic Jumpman in Donkey Kong, I don't think there are many gamers who forget about that, but one game that does often seem to get overlooked is this one, the original Mario Bros. I first played it many years ago on my Spectrum and I seem to remember a fairly strong feeling of indifference at the time. Coming back to it now though, and the arcade original no less, might well elicit a different reaction. One thing I didn't know before is that the game is apparently set in New York's sewers. I suppose it makes sense now that I think about it but it's still unlike any sewer I've ever seen. Not that I've actually seen too many but you know what I mean. This sewer is apparently infested with many strange creatures and it's down to the heroic plumbing duo of Mario and Luigi to exterminate them. 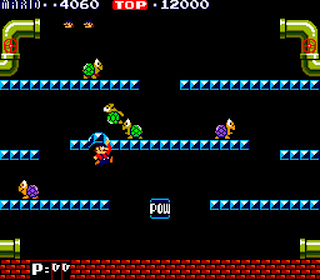 There are 21 single-screen stages in total. All of them are laid out the same too - there are three tiers not counting the ground, with gaps in the platforms. The highest floor features a sewer pipe at either end and emerging from this disgusting slime are the many enemies. Mario (player one) and Luigi (player two) must take them all out to end any given stage and this is done by head-butting the platform directly underneath them to flip them over, then kicking them (by running into them) to turn their lights out for good, bestowing financial rewards upon you in the process. They are not the smartest creatures around though, and will walk off the platform when they reach a gap. If they reach the bottom where there are two more pipes, they'll enter and reappear at the top, giving you renewed chances to boop them into oblivion. If you manage to clear all 21 stages (4 of which are coin-laden bonus rounds) of foul creatures, the game will unsurprisingly loop back to the beginning again! 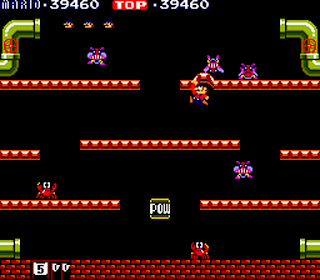 There are only three main types of enemy creatures to look out for. The first you'll encounter look like Koopa Troopas from the later Mario games but here they are called Shellcreepers and they just walk around getting in the way. After a couple of stages you'll meet some idiotic crabs called Sidesteppers. These require two hits to tip over, the first just makes them angry (and faster). Soon after, the third and toughest enemy arrives in the form of the Fighterfly. As the name suggests, they fly (or hop) around but you can only flip them when they touch the platforms. All three types of horrifying creature must be dealt with swiftly too, as they only stay flipped over for a few seconds before righting themselves and continuing their reign of terror with renewed purpose. There is also a kind-of-fourth enemy as well, called Slipice. Unlike the other enemies, this ice creature is solitary and only appears occasionally, and if left alone it will coat an entire platform in ice making it slippery. 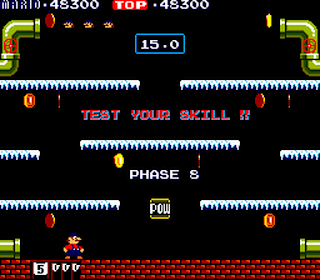 Later stages also feature icicles which fall down soon after forming and, much like contact with the enemies, will claim a life if they fall on you, and there are two types of fireball too - an orange one that moves diagonally and a blue one that moves horizontally. Both are fatal to the touch but, surprisingly, they can also be taken out in the same way as the enemies. Since they generally reappear straight away though, it's probably easier to just dodge them. To that end, you might find moving Mario (and Luigi) around a little clunky to start with. It's not too bad but it does take a little getting used to, mainly due to their need to gain/lose momentum which, when combined with the fact that you can't jump up through the platforms above, can make things a little tricky at first. Other than that it's not a particularly difficult game even though you get very little help; only the 'POW' button really, which shakes the screen around, stunning any platform-bound creatures. 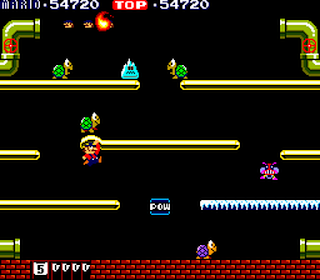 Even that handy whumper can only be used three times each credit though, so you're largely on your own, but it's still much more fun to play than I remember. It's a bit disappointing that the stage layout doesn't change but the graphics aren't bad. The backgrounds are the same black that was normal in those days but the characters are nice and bright and the fast-paced action certainly keeps you on your toes. There's no in-game music to sooth your ears as you play which would've been nice, but there are a couple of memorable jingles and the effects are great, and it's a very pleasant package overall too. I'm not sure what turned me off about it all those years ago but I'm glad I've given it another chance. It's rather repetitive as you might imagine but it's good fun too, and pretty addictive. It helps when you learn a few tricks, especially making use of the screen-wrap, and soon you'll be going for high score after high score, bopping all those idiotic creatures to kingdom come.