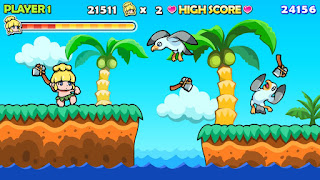 Holy smokes, it's a glorious time to be a Wonder Boy fan, for not only do we have the two Wonder Boy III games on their way (one new adventure apparently inspired by it as well as a remake) which I have covered here already with much enthusiasm, but now news reaches me of yet another game to feature the infantile whippersnapper. This time it is seemingly based on the original Wonder Boy, a game I recently reviewed here at Red Parsley and enjoyed a great deal, and is being handled by CFK, a Korean publisher responsible for releasing tons of titles in their native territory, mainly for consoles and handhelds. 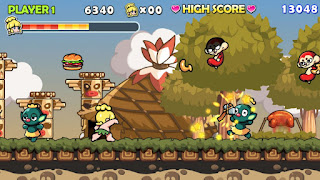 There are very few details on their latest project so far - at the time of writing it isn't even mentioned on CFK's website - but there is the video/trailer below which you've probably already checked out. As you can see, it's merely based on the original rather than a direct remake, apparently including new stages and enemies as well as the usual spruced up audio/visuals. There has been a mixed reaction amongst fans so far regarding the latter too, with some bemoaning the lack of charm and minimal animation of the characters. I think it looks pretty cool so far though. What about y'all? Keen to give it a whirl?