Nintendo have found themselves in a strange position in the market in recent years. Back in NES and SNES days their systems were flooded with third-party titles. Some were exclusive, others not, but there was always plenty of choice. Starting with the Wii and continuing with the Wii U, though, they seemed to have branched off from their competitors, leaving the bulk of the third-party releases for Sony and Microsoft while their own systems, under-powered in comparison to the others, were left with some fantastic first-party titles, some gimmicky releases to take advantage of the unorthodox controls the machines employed, but little else. 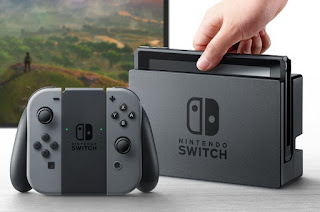 That brings me to the new system, known until today as the 'NX', and one to which I had devoted more than a passing thought over the last few months. Foremost in these thoughts were wonderings about whether Nintendo would continue their trend of recent years or go back to their old ways, and all was revealed yesterday at the system's grand unveiling. It will be known as the Nintendo Switch and, at first glance, it appears my fears have been realised, for their new home console will actually be more akin to a dockable portable system. As you may well have seen in the video already, the 'console' itself seems more like a tablet which can either be docked, with games played on TV, or undocked and used wherever you like with parts of the detachable controller clipped to the sides so as to not rely on pesky touch-screen controls. This does seem pretty cool in the video, admittedly, but my first reaction was one of disappointment. Would Nintendo once again be using a hardware gimmick to sell their new system?

The revolutionary motion-sensitive controls worked amazingly well for them with the Wii so I guess you can't blame them for trying another gimmick with the Wii U in the form of its separate game-pad with built-in touchscreen, but that time it didn't work, so I genuinely thought for a while that this time they might actually just make a fairly normal home system, cram it with powerful chips, and win back all those third-party developers, but that doesn't look to be the case from first impressions. As nice as the portability looks in the video, I can't help but wonder how many people will actually end up using it like that. Would you take it out with you to a party? 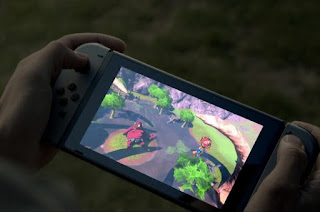 I was immediately left with several questions upon conclusion of the video as well. First and foremost, does the compact nature of the system mean it will again be lagging behind its main rivals - the already established PS4 and Xbox One - in terms of graphical grunt and hardware tricks? Something else I found myself wondering is the format of its games. It seems unlikely the unit will incorporate a DVD/BD drive so will games come on the teeny little cartridge things we get a glimpse of in the video, or will software be digital download only? Of course, if the Switch is indeed bereft of an optical drive of some sort, that also means it has another sizeable drawback. One great thing about the last two Nintendo consoles is that they were both compatible with the preceding system's games, but the apparent lack of a 'slot' in the side of the Switch would mean it is not able to run Wii or Wii U games. Considering the Wii U wasn't even out that long, that would be a bit of a crapper if you ask me.

Of course, it would be more than foolish to write off any system this quickly, and Nintendo rarely fail their fans. Their first-party games for the Wii and Wii U show they haven't lost their touch for making really enjoyable family-friendly games and I don't doubt we can look forward to some spiffers for the Switch too. Confirmed already is a port of the latest Zelda adventure, Breath of the Wild, as well as an enhanced version of Mario Kart 8 and another Splatoon game, and I'm sure we can look forward to new titles featuring the likes of Mario and Kirby too. 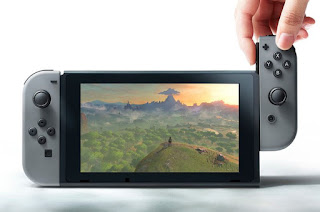 Slightly surprisingly there is a port of Skyrim coming too, which will be four years old by then, but it's still a stunning game, and Nintendo have also been waving around a list featuring the names of almost fifty developers who have signed on to develop titles for the Switch, including such heavyweights as Square Enix, Capcom, Namco, EA, Sega, and Konami, so the future looks pretty rosy, right? Well, it's more reassuring than failing to announce any 'development partners', obviously, but history has taught us not to get carried away - most other systems have similar lists shortly before launch and it doesn't always turn out as we hoped! Still, whichever games do end up appearing, they should certainly look nice as, like the almost-released PS4 Pro and Xbox One S, the Switch will be capable of 4K Ultra HD video streaming. This doesn't mean the games themselves will run in 4K resolution - they will most likely run at 1080p - but they will still undoubtedly look absolutely gorgeous.

There really isn't that much concrete information just yet though. Like most at this stage, I'm just speculating really. I hope the Switch gets the full support of all the big developers - it would be nice to see Nintendo back at the top, so to speak. The last thing we or Nintendo need is another system with a handful of killer first-party games and little else beyond stacks of gimmicky shovelware nonsense. I might have seemed negative so far but I'm really hoping my fears are not realised and that the Switch ends up being awesome. I might even be tempted to get one if Nintendo remember the F-Zero series exists. That could be so great...