Retro News - Hewson Are Back! 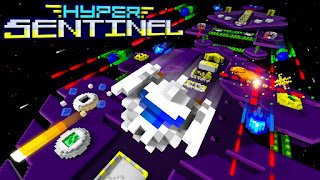 I'm sure pretty much everyone into gaming in the 80's was well aware of Hewson Consultants. Their many releases, mainly for the 8-bit home micros, were of a consistently high quality and they made quite a name for themselves as purveyors of the utmost splendour, but sadly they shut down only a couple of years into the following decade. But now they are back! Well, kind of, for announced earlier this year was a Kickstarter for a brand new game bearing the Hewson name. I had planned to cover it here at Red Parsley back then but, of course, it's taken me ages to get around to it as usual. In the intervening months the project sadly failed to reach its target and seemed to be over before I'd even posted about it. Happily, though, that's not the case and it's looking pretty good! 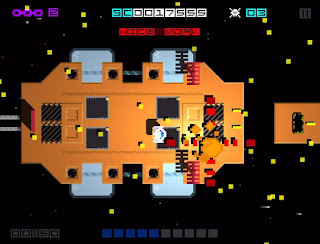 The game is Hyper Sentinel and it's a very retro-ish shooter, featuring overhead-viewed, side-scrolling stages in the same vein of Andrew Braybrook's classic Uridium which was published by... Hewson! It has a smidge fewer stages than its inspiration (only 12 rather than 15) but adds power-ups and boss battles into the mix, and there will also be a ton of medals to aim for to improve longevity further still. Even more features are planned for possible inclusion too, if all goes to plan. The pixelly graphics are of a similar style to Uridium's but there are more colours used and some flashy effects too, while the audio retains the SID-stylings of the earlier game as well. At present only the iOS version is available to play in demo form (signup here) and I don't have an Apple product so I haven't actually played it yet, but I think most shmups fans will join me in saying that it's looking really nice so far.

Non-Apple owners like me will have to feast their eyes (and ears) on this video for now. Expect a full review here once the Android and/or PC versions are available...