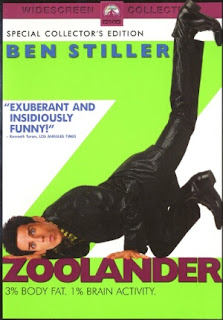 They say you shouldn't judge a book by its cover, but does that apply to movies too? I'm not sure it should as one look at the cover and tagline of this one should tell you all you need to know! Set in the glamorous / preposterous (delete as appropriate) world of the fashion industry where top designers who rely on cheap child labour in Malaysia are panicked by the Prime Minister of that country declaring that he intends to outlaw such practices. The industry bigwigs then order top designer, Mugatu (Ferrell), to find a male model stupid enough to be brainwashed into assassinating the Prime Minister before he can make his decree. Enter world famous veteran male supermodel, Derek Zoolander (Stiller), who is struggling to deal with brash upstart, Hansel (Wilson), stealing his limelight. But is anyone really that stupid?

Yep, it's a ridiculous concept, based on a pretty ridiculous character introduced by Stiller at the 1996 VH1 Fashion Awards, but I'm sure it's not intended to be anything else. Taking the not-exactly-groundbreaking revelation that models are as dumb as a bag of hammers and stretching it to breaking point, Stiller, who also directs, has a ball as "really really ridiculously good looking" moron, Derek. Much of the cast is made up of his family and friends with fellow 'Frat Pack' alumni Owen Wilson as rival model, Hansel, Vince Vaughn as his estranged, mute brother, and Will Ferrell on top form as fashion mogul, Mugatu. Joining them is his real-life wife, Christine Taylor, as snooping reporter, Matilda, and his father, Jerry Stiller, as his manager, Maury. Only Jovovich as Mugatu's henchman (or henchwoman), Katinka, will be unfamiliar to Stiller fans.

This isn't the kind of film that calls for particularly amazing acting on the part of most of them though, the comedic burden is placed squarely on the shoulders of the three leads, a requirement each is well-versed in exceeding. The premise of Stiller and Wilson as top models is funny enough to begin with, but everything is so over-the- top and exagerated, whether it's Derek's retirement from modelling and subsequent attempt at coal-mining to his friends petrol fight (I guarantee you won't be able to listen to Wake Me Up Before You Go-Go without thinking of this film again!), not to mention near enough every scene featuring Mugatu! There are also cameos aplenty including David Bowie, Natalie Portman, Billy Zane, Lenny Kravitz, and a variety of fashion-world regulars.

Zoolander didn't do well at the box office but like so many other films, it found its feet on home release and finally got the plaudits it deserves, and to such as extent that there's now apparently a sequel planned! You won't find an intelligent, inter-weaving plot here, nor multi-million dollar special effects, but if you have any interest in absurd spoofs, this is one for you. Let's face it, the fashion world is as ripe for spoofing as anything could be, and Stiller lets rip with aplomb, even finding time to riff on Godfather Part 2 and 2001 of all films! In fact, pretty much every scene has a gag of some sort and there's a good hit-rate here. The soundtrack is good too, with some well-placed music complementing the insanity well. Stupid, ridiculous, absurd, and crazy? Yes! But it's also really really ridiculously funny!