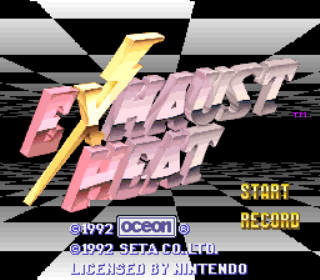 After I'd had my SNES for a while and played the first few games I had to death, I started to gradually add a few more to my collection, and one of the first games of my second batch was this F1 racer. After playing F-Zero so much of the previous year, I had high expectations of this, especially given its glowing Mean Machines review. Granted, on paper an F1 game doesn't sound as exciting as a futuristic racer featuring hovering jet-cars that blast around the obstacle-filled courses at speed in excess of 400kph, but being a big fan of F1, I was looking forward to it all the same. First impressions after turning the game on were good - the title screen is nice and the presentation over the menu/options screens is really nice, but once I made all the selections I needed to and actually started playing the game my heart sank.

Whilst also featuring a Training Mode (a 'quick race' arcade- type mode, basically), the main play mode in Exhaust Heat is its comprehensive Grand Prix mode (career mode). Here you take on the role of both team owner and driver. You'll start the game with a little money and must earn more through your racing - obviously the better you do, the more you'll make. First things first though. Before you begin, you need to select a slot (giggity) in which to save your game. You can then opt for a Test Run which gives you two laps to familiarise yourself with the course, or jump straight into the Race. Here you must first qualify for the race before taking your place on the grid and racing amongst a field of eight cars. Each season consists of 16 races based on what at the time were the actual races on the F1 calendar (this was of course before all the new ones started being introduced).

The drivers are also based on the F1 drivers of the time, with the emphasis firmly on the 'based on' part! It seems that Seta didn't have the license to use the actual driver or team names so we have some vague approximations being used here, but the drivers all look like who they're based on (Mansell, Senna, Prost, etc). One thing that is not based on actual F1, however, is the ability to customise your car. Well, in real F1 I guess you can change wings, tyres, engines, etc, but I'm pretty sure they don't use nitrous oxide! For yes, the cars here are able to employ the use of nitro's amongst other things, and very useful it is too. The customisation options are actually pretty extensive for an arcade-style racer, allowing you to alter front, middle, or rear downforce, add faster/lighter components, change brakes, chassis, fill up the nitrous tanks, and install more powerful engines. This all costs money of course, which must be earnt by doing well in races (or by doing badly many many times).

Something else that costs money is damaging your car during a race. In a slightly unfair alteration to real F1 courses, running off the course here, even by just a small amount in some places, will not result in gravel traps as you might expect, but instead, what seem to be masses of solid concrete. These not only cause damage to your car but are also a real pain to get away from. If the damage-meter fills up, it's game over. You can repair your car by visiting the pits, but as you might imagine, the time-delay in doing this during a three lap race pretty much ruins any chance of winning, and finishing a race with a damaged car sees you incur financial penalties, so the only way to get maximum money is to drive perfectly. That's pretty much my biggest gripe with this game - it can be very frustrating. A great run can be ruined by hitting... well, anything really. Contact with other cars often results in a 180 degree spin, and straying off course usually has the annoying effect already mentioned.

Aside from that, the game looks very plain and there's very little variety in the backgrounds. I know that's to be expected with this kind of game, but even the cars are small and lack detail, and the Mode 7 effect, made famous with the aforementioned F-Zero, is less impressive here. There's no in-game music either which is a shame as the music that does exist is pretty good, much like the presentation generally. It can be a pretty fast game when it gets going though, and it will last a while too. The Grand Prix mode doesn't last for a mere season - you can carry on as long as you want, as far as I can tell. I believe I was a five-time defending World Champion at one point! After the initial disappointment of seeing the game for the first time, I did get into Exhaust Heat after a while. I always enjoy a good career mode to get my teeth into, but the game hasn't aged well and despite still being reasonably playable once you've readjusted to it, there are so many superior racing games on the SNES, it's hard to think of a reason why you would. Okay, maybe that's a bit harsh - it's really not that bad, but don't expect to be bowled over!