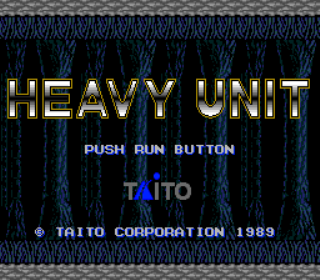 If you were asked to think of a Taito shmup, there's a good bet you'd immediately think of a Darius title. This is largely understandable due to the number of games in that series if nothing else, particularly on the PC Engine which was groaning under the weight of shmups of varying quality, but they did make a few other games of that type too. Among them is Heavy Unit, which is again a horizontal scroller converted from their arcade original. The story is pretty similar to that of the Darius games in that one of Mankind's planets has come under attack and needs defending. In this case it's our first artificial star and planet, Le Tau, which a race of genetically modified alien monsters has designs on! Naturally, it falls to you to vanquish this evil (and scary-sounding) foe by making use of the 'Heavy Unit', a heavily-armed transforming spaceship/mecha.

The planet in question is apparently a rather diverse one, for the six stages that make up the game are all pretty distinctive, although that could be because the aliens have already had their way with it! Featuring a forest, gelatinous pink alien slimy stuff, and big metallic bases amongst its diverse locales makes it fairly easy on the eyes, but it's definitely not easy on anything else - Heavy Unit is one of those 'suicide missions' which actually is! Each stage is filled with a wide variety of alien scum of many shapes and sizes. The small ones generally attack en masse and move quickly, and they don't just go down after a single shot either! The larger ones are obviously less agile but make up for it with their firepower. Each stage also predictably ends with a large boss too, and some of these are pretty strange, including a dinosaur skeleton!

Much like the recently-reviewed TransBot for the Master System, this game features a ship that can transform into a flying robot-type thing, and much like TransBot it's a gimmick that really doesn't serve any useful purpose. Here, that ability is one of a very small number of power-ups, and is basically a different weapon. Your 'Heavy Unit' ship looks fairly unspectacular and in fact is, in pretty much every way. Its default weapon is a puny pea-shooter and, unfortunately, power-ups with which to upgrade it are not frequent. When the 'P' icons do arrive though, they increase the power and range of its cannon and also provide weak missiles that fire above and below the ship. In order for your ship to undergo its aforementioned transformation, you need to look for a 'T' icon, which are even rarer. Collecting this will cause it to change into a flying robot, or mecha, which has a more powerful main gun, and homing missiles, and collecting it again will cause your craft to revert to its previous form.

Remaining power-ups include the 'B' icon for a shield which protects you for a few hits, 'S' icons for much needed speed- ups, and 'E' icons for extra lives. All but the latter of these are found by shooting a certain type of enemy, but the extra lives are a little harder to find. There is one per stage (as far as I can tell) and each is hidden, usually in part of the scenery. They can be found by shooting at its location but you have to find out where that it first! That's actually quite telling about this game's biggest fault - take one of my favourite horizontal scrollers, Thunder Force 3 for example... When I play it from beginning to end without losing a life, by the final boss I have 23 lives. When doing the same with Heavy Unit for this review, I had 3. That gives you an idea of the relative abundance of extra lives to be found, and it's indicative of the game's insane difficulty level generally.

Heavy Unit is a strange game. There's nothing particularly remarkable about it but it's not a bad game - what there is of it looks and sounds decent enough - it's just so stupidly hard! Most games ease you in with the first few screens featuring small, relatively harmless enemies that you can pick off with a single shot. Here, the first enemy is a fast skeletal snake-type thing, and it will probably kill you repeatedly. You'll probably soon decide that avoiding it is a better idea - it is killable but it'll be a while before you actually manage it! After this there is another, then two more at once, all of which whoosh onto the screen at high speed, and all of which take multiple hits to destroy. After that you'll reach the point from which the first screenshot is taken, above. This features three rapid-fire, directional cannons (each of which takes a real pummelling to disable), then, after navigating around a large moving piece of scenery you're faced with three large, metallic snakes. Getting past this point will take multiple restarts, even for a fairly proficient shmup gamer, and it's only the first three screens or so of the game! Utter insanity.

Unsurprisingly, what with the somewhat harsh difficulty here, Taito didn't have to make the stages very long. They do look fairly nice for the most part, and some parts of them are more than a screen high, but they scroll very slowly, and each would be over in minutes if it wasn't for the inevitable restarts. Some parts of the later stages have moving obstacles, parts of the scenery, and barriers to further hamper your progress, but they needn't have bothered as only a very small percentage of gamers will ever reach them. I played this game via emulation for this review. If I hadn't, I'm confident I wouldn't have even finished the first stage. It took me a good couple of hours to reach the final stage, and that was with saving and reloading my game about a hundred times! If Heavy Unit had a more forgiving difficulty curve, it would still be merely an average shmup, but as things stand there really is little to recommend. To make things worse, the collision detection is also pretty ropey here. Even the pause button didn't seem to work at some points, usually the most critical of course! The PC Engine is positively swamped with shooting games. They're not all great of course, but I haven't yet played any less deserving of anyone's time than this one. Unless you're an insanely gifted gamer (or perhaps just insane), steer clear of this.