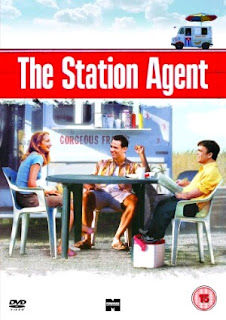 Tagline: "Loneliness is much better when you have got someone to share it with"

Every now and then I discover a film, usually by accident, that just speaks to me. These films generally turn out to be indies, usually feature lesser-known or even unknown actors, and they are often the kind of films where nothing much actually happens. The Station Agent is one of these films, and one of the main reasons I wanted to start writing reviews of films. I think this is mainly because I’ve never met anyone else who’s even heard of it, nevermind seen it - I wanted more people to know about it, to appreciate it, to love it the way I do. But at the same time the prospect of reviewing it made me nervous. What if everyone who read my review hated it? I don't want anyone to dislike this film, I feel protective of it! However, now that I'm approaching my 100th post here at Red Parsley, and having watched the film for the umpteenth time recently, I thought it was time to finally try to give it the review it deserves.

The splendidly named Finbar McBride (Dinklage) is a fairly normal man except for one thing. He suffers from achondroplasic dwarfism. As a result of this, and how people subsequently treat him, he has grown to be very quiet and withdrawn. He has few friends and interests with the only exception being his deep love for all things train-related. He works in a New York train model store for his best (and pretty much only) friend, Henry (Benjamin). When the elderly Henry suddenly dies, Fin finds himself out of work and homeless, but with one hope - bequeathed unto him by Henry is some land in New Jersey on which sits a disused train depot. Figuring he has little to lose, he sets out on foot, following the train tracks, until he reaches his new home.

When he arrives, what he finds is little more than a run-down wooden shack in the middle of nowhere, but it doesn't matter - it seems he may finally have the solitude he craves. For a few hours, anyway! In the morning, he's woken by some sounds outside which turn out to be a hotdog van operated by young Cuban motormouth, Joe (Cannavale), who is surprised to find someone living in the supposedly abandoned depot. Soon after Joe starts forcing his friendship onto an initially disinterested Fin, he also has some unusual encounters with aspiring artist, Olivia (Clarkson), who escaped to the area to grieve the loss of her young son and subsequent breakdown of her marriage. Fin then meets (or is stalked by, initially) schoolgirl and fellow train enthusiast, Cleo (Goodwin), and quite literally bumps into pretty librarian, Emily (Williams). Before long his new, quiet life isn't looking so quiet after all!

It's a hard film to categorise. Since I discovered it I've found some others of a similar style and none of them really adhere to any particular genre. It's part drama, part comedy... there's even an action sequence (kind of)! There's one term I've heard to describe films like this though, and that's "slice of life" films, and that sums up The Station Agent pretty well - it literally is just a quick peek at the lives of a small group of people, and whatever they happen to be going through at the time, who form unlikely friendships. It has no real beginning or end as such, and nothing Earth-shattering really happens, or at least not for anyone but the characters involved, but it seems important due to the affection that grows for each of the characters.

As I said earlier, I love this film, so I'm thankful to all involved, by the first person towards whom I should direct my thanks is writer/director, Tom McCarthy, who struggled to create his vision on a shoe-string budget. Many of the exterior shots were filmed 'on the fly', train shots were stolen, the extras were often friends working for free. Even the car Olivia drives was borrowed from a family member! He may have had some help but he was calling the shots, such as casting and locations, and the end result is exceptional. He cared a lot about the film and it shows. Also to be applauded are the splendid performances from all actors involved. Peter Dinklage, who is surely the finest actor of his stature ever seen, is more commonly seen playing dwarves and elves and the like in mostly comedic roles, so he must've relished the opportunity to not only be the star of a film, but also for the focus of his character to not lean so heavily toward his size.

It's a chance he makes the most of too. The years of hurt and frustration that have built up within Fin are superbly portrayed by Dinklage. Every sigh, grimace, and smile are assuredly felt by the viewer as we watch his realisation that the peace and quiet he craves may help his self-esteem but it sure gets lonely! After all, as Fin tells Olivia as their 'train chasing' party dies down "It's funny how people see me and treat me, since I'm really just a simple... boring person". He know he's nothing special, he just wants to be treated that way. Patricia Clarkson, also making the most of a rare starring role, puts in a great turn too. The immense pain she feels for the loss of her son seems near-constant, threatening to spill out at almost any moment, but she struggles on, trying her best to move on with her life.

Bobby Cannavale is an actor I'd personally never seen before I watched this film, and have seldom seen since. It's hard to understand though - in some ways he makes Joe the life of this film. His exuberance and optimism for... near enough everything, is infectious and you can't help but wish you could meet someone like him in real life! Even during his rare sullen moments he is convincing, much like damn near everyone in the film. Williams is adorable as Emily who, whilst never saying as much, seems desperate to leave her little town behind and start again somewhere else, Goodwin is also amusing as friendly schoolgirl, Cleo, and most of the smaller character could easily warrant more screentime themselves.

Almost seeming like a character in the film itself is the beautiful scenery of Newfoundland, New Jersey, where a majority of the film is set and filmed. Accompanying many of its scenes is some fantastic music which suits the film well. The Station Agent is a quiet, unassuming film, and I could understand if some people found it boring, even pointless, but these would probably be the sort of movie goers who need guns, fighting, sex, and all the usual ingredients of Hollywood films to be entertained, but this film is in an indie. It possesses none of those qualities (well, besides a small scuffle), and the fact that it was not only made for next to nothing, but that it was also McCarthy's first film is nothing short of amazing in my view. I'm sure there are few (if any) people who love this film as much as I do, but that's irrelevant to me. Sure, brainless action flicks have their place, and can also frequently be highly enjoyable too, but none of them has ever made me want to watch them over and over, and that's something it didn't take me long to realise I wanted to do here.

Special Trailer Note: Much to my regret, the trailer for this great film features the highly annoying Movie Voiceover Guy. He annoys me at the best of times, but he really doesn't suit this film, so try to ignore him while watching this trailer!