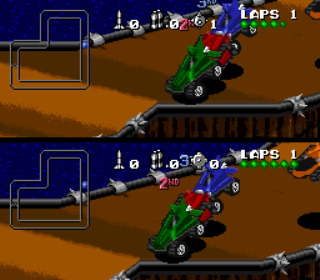 This game may have been more famous for its soundtrack when it first appeared but that's far from its only positive attribute. After choosing one of the six racers available, you then get to race their 'rock car' around the simple, undulating circuits trying to blow everyone else up! It's possible to upgrade your car between races with all the usual stuff - engines, tyres, shocks, shields, etc, as well as equip it with various weapons such as missiles and mines. It's great fun with one player but even better with two, and I'm also pleased to say it doesn't use the annoying 'catch-up' feature here, instead opting for the split-screen view which makes proceedings far more enjoyable if you ask me. And yes, the soundtrack is good too, featuring instrumental renditions of various hard rock classics. Probably the best overhead racer on the SNES. 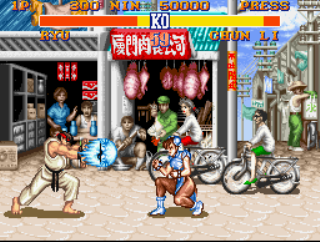 Yes, this original has dated a lot now - it was inevitable given the amount of 'fine-tuning' Capcom has done to the series since it came out - but it was for a long time the only version of this great game I played. I'm still not particularly good at it either - the only character I can regularly beat friends with is Ryu, and even then I can't execute Dragon Punches reliably! But I don't think I need to extol its virtues too much - everyone's played it, at least when it first came out, and I'm sure all of you, like me, spent a lot of time beating your friends (or trying to!). Pretty much any of the updates released for this game would be a better option to play today, but I have very happy memories of countless two-player fights on this pricey original. 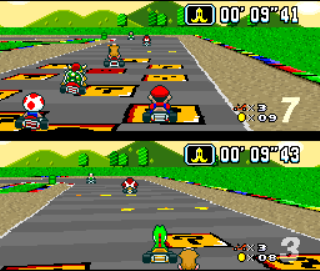 Like Street Fighter 2, this was a revelation when it was originally released and soon became a permanent occupant of the SNES when friends visited. I've always thought it a little overrated personally, at least as far as one player games go, due to the rage-inducing AI which gives overwhelming preference to the CPU-controlled karts, but with two players racing, at least you're both equally disadvantaged with regards to this! Plus, if you get fed up with being smacked-up by the computer-controlled racers in the standard grand prix mode, you and a friend can retreat to the confines of the 'Battle Game' - a one-on-one fight to the death within the confines of an enclosed arena, which is arguably more enjoyable than the main game anyway! 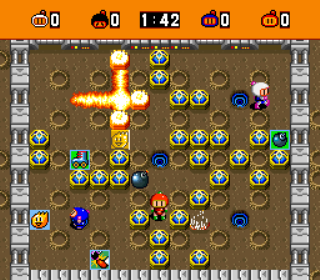 It can't be a list of the best two-player games without a Bomberman game included! Well, except for the Master System list as that console doesn't have a Bomberman game. Poor old Master System. This was the first game in this great series that I played and it's still one of my favourites. Although they're not to everyone's tastes, I personally really enjoy playing the single player modes on Bomberman games but not even I could claim they're as much fun as the frantic, multi-player battles that can develop with more than one participant, and this game was actually playable with up to four players! Even with two though, it's close to perfection as far as multi-player action goes. Just make sure you don't end up blowing yourself up - there's no honour in an accidental suicide! 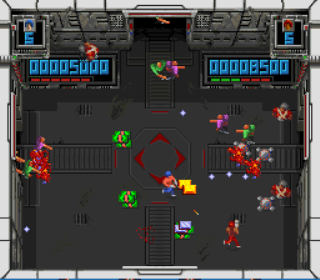 This arcade classic draws its inspiration from a number of sources, notably a combination of Eugene Jarvis' Robotron 2084 and late 80's sci-fi action films such as The Running Man and Robocop, but it mixes the concoction to perfection. It was released on most consoles and home computers of the time, and most of them were at least pretty good, but the best conversion of Smash TV was without question the one the SNES received, with the system's standard title prefix. The near-arcade perfect graphics and splendid music offered by Nintendo's powerhouse certainly helped matters, and created a superb atmosphere, but it was the layout of the control pad that clinched the title of Best Conversion - the diamond button formation was a perfect substitute for the twin-stick controls of the original, allowing you to run in one direction and shoot in another with ease. Featuring dozens of sprites on screen without any slowdown means this game can get as claustrophobic as Robotron, but with two-players blasting the non-stop enemies it's never anything less than thrilling. You can work together with your friend to progress as far as possible, or you can compete against him by stealing the money, prizes, and extra lives to get the best score! A frantic, exciting, non-stop adrenaline rush of a game which was made to be played by two.
Posted by RetroKingSimon at 17:00