Arnold Schwarzenegger: love him or loathe him, few could deny that a vast majority of The Governator's films are immensely entertaining. He's been around a long time now, and from his chortlesome beginnings in the late 70's with the likes of cheese-fest, Hercules In New York, up to his attempts to flex his comedic muscles with Kindergarten Cop, through self-parody in The Last Action Hero, right up to the underrated Collateral Damage, his career has proven to be rife with memorable moments.

Regardless of the rest of his filmography, however, his most popular films have always been the loud, explosive action films he starred in, and what a run it was! Starting with sci-fi classic, The Terminator, through Commando, Predator, Total Recall, True Lies... the list goes on. These films have remained enjoyable to this day and have many great qualities, but one of my favourite things about them are Arnie's groan-inducing quips! Here are my favourites, which coincidentally all relate to a bad guy's death...

Spoiler Alert: the Top Five Movie Moments featured here obviously assume that you've seen the films in question or don't mind knowing about their most prominent moments so don't come whining to me if they ruin a film that you haven't seen yet! 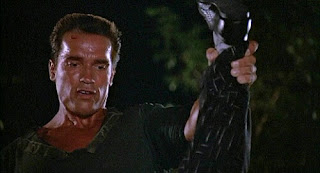 Diminutive Sully doesn't make a convincing bad guy, just a bit of an obnoxious dick, but of all Bennett's cronies, Matrix (Arnie) dislikes him the least, telling him "You're a funny guy, Sully, I like you. That's why I'm going to kill you last". However, after a pursuit across a mall followed by a car chase, Matrix runs him off the road in a high mountain pass. Grabbing the dazed Sulley, Matrix holds him by the ankle off the edge of a cliff to scare him into revealing information regarding the whereabouts of Matrix's kidnapped daughter. After believing he has exhausted his resource, he asks Sully "Remember I said I was going to kill you last? I lied" and then drops him from the high cliff, watching him fall to a certain, unpleasant death. Returning to his car, his bit of stuff, Cindy, asks "Where's Sully?". Matrix's calm response?... "I let him go".
4 - Taking Out the Bad Guys (Predator) 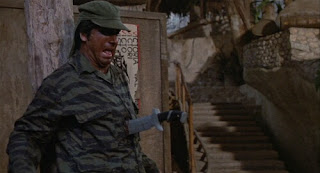 Having journeyed into the Central American jungle to search for US hostages being held by local guerilla's, it doesn't take our heroes long to find them. How could it with Arnie, Apollo Creed, and Jesse 'The Body' Ventura among their ranks? They quickly begin their assault on the camp where the hostages are being held. During this assault, an enemy grunt tries to shoot Dutch (Arnie) who quickly turns round and throws a huge Rambo-style knife at the guy which goes right through his body, pinning him to the wooden building behind him, at which point Dutch remarks "Stick around!"... Hee hee hee!
3 - Harrier Fight (True Lies)

Super-spy, Harry (Arnie) has already pretty much saved the world from the evil terrorists in this highly humorous action yarn. All that remains (beyond working out how to land the Harrier jet he's comandeered) is a fitting disposal of the chief bad guy. Having already had a fight on the jet whilst flying, it occurs to Harry to tilt the jet to the side to throw head-psychotic terrorist, Abu, off balance. However, as he falls from the side of the jet, his backpack gets caught on an under-wing sidewinder missile. An ideal way to get rid of him has miraculously presented itself, but before launching the missile in question (which then flies though a skyscraper and takes out a bad guy's helicopter on the other side!), has Harry got any final words? "You're fired!".
2 - The Final Showdown (Commando) 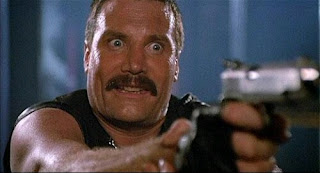 After one-man-army, John Matrix, has shot, stabbed, and generally blown up an entire country's armed forces, he just has his old buddy-turned-nemesis, Bennett, to take care of before he can finally find and rescue his young daughter, Jenny. After a lengthy fight featuring fists, knives, and guns, Matrix has the upper hand. After suffering a severe electrocution after being pushed against some live electrical gear, Bennett is still going. Until, that is, Matrix rips a large steam pipe from the wall and throws it, impaling him. What are the last words he hears as he dies? "Let off some steam, Bennett!"...
1 - The Sawing of Buzzsaw (Running Man) 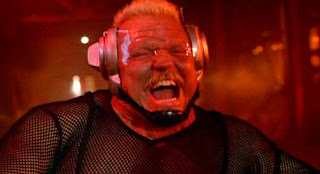 Wrongly accused of a crime and sentenced to compete for his life in hit TV show, The Running Man, Ben Richards (Arnie) isn't having a particularly good week. This is no doubt made worse when he discovers that the 'game' entails being trapped in a huge 'game arena' and being hunted down by ruthless 'stalkers', the order of whose appearance is voted for by the viewers. The second stalker to be sent after Richards is the psychotic, chainsaw-wielding Buzzsaw who apparently "slices and dices his opponents limb from limb into quivvering, bloody sushi!". After toying with Richards and his fellow 'runners' for a while, they finally lock horns properly. After some time spent battling for control of his chainsaw, Richards forces it down, between Buzzsaw's legs, before quickly jamming it up into his family jewels and continuing to cut vertically until the chainsaw gets stuck. Upon rejoining his friends, Richards is asked where Buzzsaw is. He replies "Oh, he had to split"... Chortle!
Posted by RetroKingSimon at 11:37