Hello and welcome to another new Red Parsley feature! I love retro videogames but they aren't the only thing I love. In fact, I've probably spent more of my time watching films that I have playing games! So, rather than do an in-depth review of some older films that are already well known, I thought I'd instead present what are to me their greatest moments, whether it's a brilliant moment of acting, a jaw-dropping special effects sequence, some pant-wettingly funny dialogue, or anything else. I hope you like it! :)

My good friend, Luke, and I greatly enjoy gangster/mob type films. There are several directors who excel in the area, but one of the contenders for best must surely be Martin Scorsese's adaption of Nicholas Pileggi's novel. This amazing movie is surely a contender for greatest ever gangster film and is chock full of brilliantly memorable moments, so picking just five is a tall order, but here are my choices: 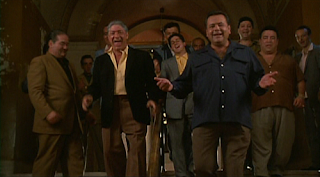 After Henry gets pinched for selling 'jacked cigarettes, it's not facing his parents that scares him - it's facing Paulie and the rest of his crew. Presuming they'll all be mad with him for getting caught, their actual reaction brings home to him just how different life in his new family is, and he likes it!

Jimmy: "Here's your graduation present" (slips some money in Henry's pocket)
Henry: "What for? I got pinched"
Jimmy: "Everybody gets pinched, but you did it right. You told them nothing and they got nothing"
Henry: "I thought you'd be mad"
Jimmy: "Mad? I'm not mad with you, I'm proud of you. You took your first pinch like a man and you learnt two greatest things in your life. Look at me, never rat on your friends and always keep your mouth shut"
(walks through the doors to find Paulie and the rest of the crew gathered)
Paulie: "Ohhh, you broke your cherry!"
(much hugging and merriment ensues)
4... "Freeze!" 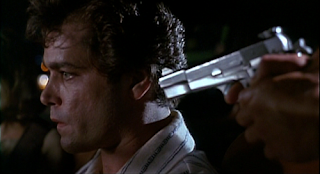 After a busy day running errands all around the city and growing increasingly paranoid about the helicopter that's been 'following' him, Henry's nearing the point where he can finally relax and enjoy his long-awaited dinner with his family. Before he can do that though, he has one last trip to make. Getting in his car, he starts to pull out of his driveway before he notices some sort of commotion. Then, a gun is thrust towards his head...

Cop: "Freeze!"
Henry's Voiceover: "For a second I thought I was dead. But, when I heard all the noise, I knew they were cops. Only cops talk that way. If they'd been wiseguys, I wouldn't have heard a thing. I would've been dead"

And then as abruptly as that, the ride is over. The life Henry loves has come to an end, and he has a very difficult decision to make: life in jail, or break the biggest rule his way of life has - talk...
3... "As far back as I can remember, I always wanted to be a gangster" 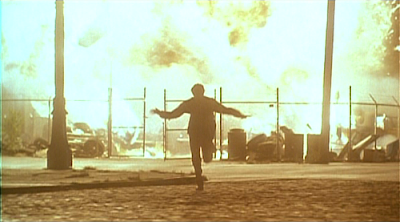 Henry's been enjoying his new job at the cabstand so much he's started skipping school. His crew have to deal with the mailman to stop any more letters from the truant officer reaching his home, but he's not been asked to do anything of note. He's mostly been running small errands, parking cars and suchlike. Then, he's asked to help Tuddy get rid of some competition. He's asked to do something important for his new friends, and he doesn't hesitate...

Henry's Voiceover: "People looked at me differently, they knew I was with somebody. I didn't have to wait in line at the bakery on Sunday mornings anymore for fresh bread. The owner knew who I was with and he would come around the counter no matter how many people were waiting, I was taken care of first. Our neighbours didn't park in our driveway anymore even though we didn't have a car. At 13, I was making more money than most of the grown-ups in the neighbourhood. I mean, I had more money than I could spend. I had it all. One day some of the kids from the neighbourhood carried my mother's groceries all the way home. You know why? It was outta respect."
2... The opening 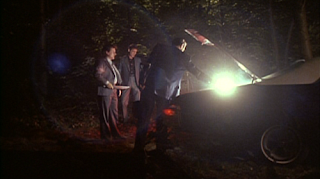 Goodfellas was pretty much the first gangster film I'd seen so I didn't really know what to expect. I was pretty young (and probably too young to be watching the 18-rated film!), so to see an opening as explosive as this one was genuinely shocking and really set the mood for what was to follow.

(Henry, Jimmy, and Tommy are driving along a quiet country road at night. Some bumping noises can be heard)

(They move around toward the rear of the car. The noises are coming from the trunk. Tommy draws a large knife. They cautiously approach and open it. The sight that greets us is a bloody, beaten body, trying to move) 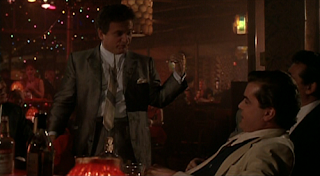 Henry: "You're a pistol, you're really funny. You're really funny."
Tommy: "What do you mean I'm funny?"
Henry: "It's funny, you know. It's a good story, it's funny, you're a funny guy." (laughs)
Tommy: "What do you mean, you mean the way I talk? What?"
Henry: "It's just, you know. You're just funny, it's... funny, the way you tell the story and everything."
Tommy: (it becomes quiet) "Funny how? What's funny about it?"
Anthony: "Tommy no, You got it all wrong."
Tommy: "Oh, oh, Anthony. He's a big boy, he knows what he said. What did ya say? Funny how?"
Henry: "Jus..."
Tommy: "What?"
Henry: "Just... ya know... you're funny."
Tommy: "You mean, let me understand this cos, ya know maybe it's me, I'm a little fucked up maybe, but I'm funny how, I mean funny like I'm a clown, I amuse you? I make you laugh, I'm here to fuckin' amuse you? What do you mean funny, funny how? How am I funny?"
Henry: "Just... you know, how you tell the story, what?"
Tommy: "No, no, I don't know, you said it. How do I know? You said I'm funny. How the fuck am I funny, what the fuck is so funny about me? Tell me, tell me what's funny!"
Henry: (long pause) "Get the fuck out of here, Tommy!"
Tommy: (everyone laughs) "Ya motherfucker! I almost had him, I almost had him. Ya stuttering prick ya. Frankie, was he shaking? I wonder about you sometimes, Henry. You may fold under questioning."

It's a testament to Joe Pesci's acting skills that he not only 'had' Henry, but also 'had' all of us watching too! How he can go from group clown one moment to genuinely chilling gets me every time I watch it!


So, that's my Top Five! Like I said, it was very hard to pick just five great moments from this consistently brilliant film. There are so many more... The posties head getting shoved in the oven, Henry pistol-whipping 'the guy across the street', the amazing tracking shot through the restaurant kitchen, Tommy's getting made ceremony, Jimmy's clean up job at the end of the film, and so many more, even Jimmy Two Times ("I'm gonna go get the papers get the papers")...

I hope you liked the first of my Top Five Movie Moments. Let me know what you think. Would you like to see more or are you happy deciding what parts of films you like yourself? Maybe I could even take requests! Thanks for reading! :)
Posted by RetroKingSimon at 22:46