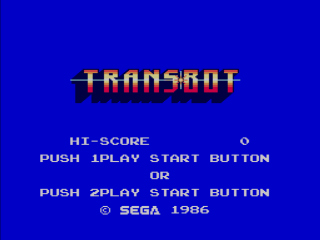 Despite being pretty popular here in the UK, the Master System was never really the most popular console of all-time. The comparative lack of games could be one reason, the NES was awash with thousands of games after all, but it's still a shame as Sega's sleek-looking console was pretty innovative for its time. Among the bright ideas it housed was a 'Smart Card' system, adapted from an accessory for Sega's earlier Japan-only console, the SG-1000, which was an alternative to the high-cost ROM cartridges used for most games. The card system was effectively home to a budget range of games early in the Master System's life before being dropped, but considering the number of games released on the format barely reached double figures, it didn't really matter too much! 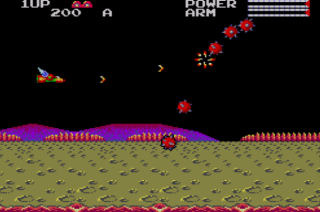 TransBot was, however, one of the few games to find a use for Sega's card format (although it was later released on cartridge too, which kind of defeated the object). It's a pretty basic horizontally scrolling shmup set after a nuclear war. Having sought refuge underground, Mankind slowly starts to emerge only to find Dalaus, a computer left over from the old world, has designs on the planet itself and has sent its minions to see us off! Luckily, our hero has access to at least one device with which to try and stop them - the CA-214 fighter. This 'TransBot' fighter initially seems normal enough, but it has the ability to change its form, and with these changes come new armaments. The default form of the fighter is a fairly unassuming jet / spaceship type craft which movies slowly and is equipped with a puny forward shot. 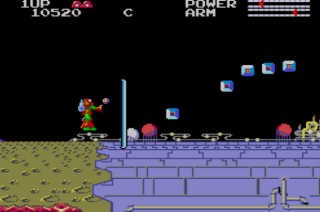 Enemies come in a variety of small, uncomplicated forms, and are easily dispatched, even with the default craft. However, they move much more quickly, and often in screen-spanning formations, so it's sometimes easier to just avoid some of them. Trundling periodically along the bottom of the screen is a small truck which is apparently a munitions vehicle which, when shot, will release an icon branded with a question mark. Collecting this will trigger the power-up bar at the top of the screen to begin cycling through letters A - G, each denoting a particular power-up. Press the button to stop it moving and you'll get the weapon it landed on. Many of these involve your craft transforming into a robot with increased firepower such as simultaneous forward and rear shots, three-way shots, wide shots, etc. However, this also makes the craft larger and therefore more likely to be hit. Luckily your craft can also be powered-up in its smaller form too! 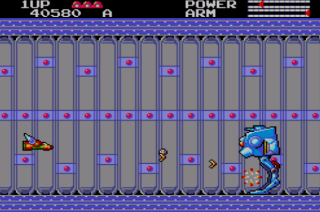 Unlike most shmups, rather than lasting until the player loses a life, these power-ups only last for a limited time and it's not long! Fortunately the munitions trucks are frequent and certain weapons are more suitable for particular sections, so it actually works out pretty well. This isn't the only slightly unusual feature in TransBot either. Your ship has an energy bar for one thing, which allows you to sustain several enemy hits before going down rather than falling victim to a single strike. Also, and perhaps most obviously, there is no real level structure, with the game instead cycling through two different types of background - a pretty standard, planetary surface, and a metallic-looking enemy base of some sort ending in a boss - and the game goes on, cycling through them forever as far as I can tell! This makes TransBot an excellent score-attack game, something backed up by the fact that world authority on score-keeping, Twin Galaxies, has an official record for the game! 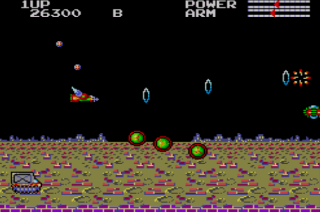 Given the popularity of the Transformers at the time this was released, it's not hard to see where the inspiration for the main character came from, but I'm not really sure it works too well. It's at best an under-used gimmick here, but does that make this a bad game? Well, back when my trusty Master System was my main console of choice and its games were freely available in high-street stores, I always steered clear of this game. Every magazine review I saw of the game slated it, despite its cheaper price point. If it was that bad then, it must be terrible now, right? Well, no actually. Being both a budget game as well as an early release for the Master System, TransBot is understandably basic, in concept as well as aesthetics, but it's actually not at all bad, and certainly not as bad as I've believed all these years! Yes, the graphics and sound are bland and repetitive, and with games like R-Type, Fantasy Zone, Cloud Master, and others available, there seems to be little reason to play this, and I'm guessing this is from where the aforementioned scorn originates, but it's a decent enough little blaster which is challenging, addictive, and good fun.