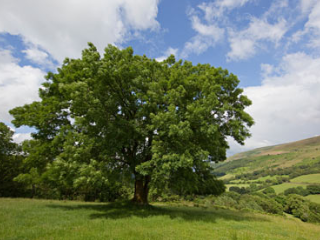 Ones of the things the English countryside is famous for is its gorgeous woodland. Many types of tree can be found in them but, after the population of elms was decimated by Dutch Elm Disease during the late 20th century, now another familiar woodland sight is under threat. Sadly, after ravaging ash tree populations across mainland Europe for the last couple of decades (Denmark has lost 90% of its ashes), the deadly fungal infection know as 'chalara fraxinea', which causes ash dieback disease, has now reached our shores as well. There are over fifty types of ash tree in the world. All of them are flowering trees of varying heights, most of them are deciduous, and all live in the northern hemisphere, but only varieties in Europe seem to be affected by this devastating fungus with Asian varieties proving resistant. Let's just hope the European varieties survive long enough to develop a resistance as well. If you have any near you, treasure them while you can.

Why It Is Awesome: Well, I suppose they aren't any more awesome than most trees from the same region but they might be gone soon! :(
Posted by RetroKingSimon at 13:23