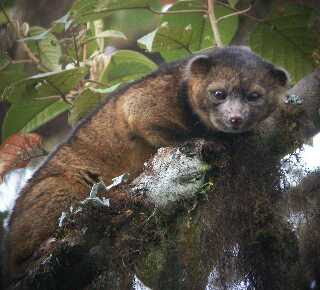 It's been a while since I did one of these but this curious-looking creature makes it more than worth it! The olinguito, you see, it a newly discovered animal, and the first such mammal in 35 years. It had previously been spotted, and even 'samples' had been taken, but scientists have only just realised that it's actually an unclassified creature. The credit for noticing this goes to zoologist, Kristofer Helgen, of the National Museum of Natural History in Washington DC, who is apparently more alert than many of his contemporaries! One reason for missing it may be its remote home in the lofty mountainous forests of the Andes mountains in Colombia and Ecuador where it spends most of its time in the trees. It's around 14 inches long, with a tail of more than that again, and is the smallest member of the raccoon family. They're nocturnal and technically carnivores but mostly eat various fruits and even nectar. Dr Helgen might not have too much longer to further study it though - sadly over 40% of the forests that make up the olinguito's home have already been levelled.

Why It Is Awesome: Because it's brand new (kind of)!