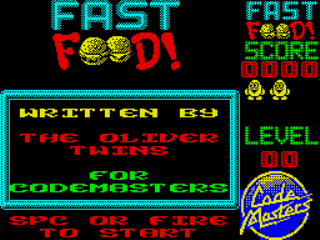 Love him or hate him, no gamers around at the time could deny that Dizzy's first game was a success, and the sequel that followed hot on its heels was an even bigger hit, so what does any sensible developer do next? That's right, release a spin-off! Fast Food was originally made to promote a fast-food restaurant chain but, mid-way through development, the Olivers simply removed the bits of associated branding and replaced the main character with their increasingly popular ovular hero. The game itself remained more-or-less the same though, and that involved a series of thirty single-screen mazes around which can be found numerous items of foodstuffs. Dizzy's job is simply to collect all of the items in each maze before moving on to the next which, as I'm sure you've guessed, makes it nothing more than a Pac-Man clone. But is it a good Pac-Man clone? 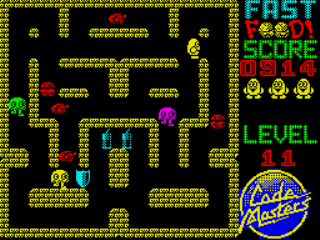 Well, it's certainly quite a bit easier than Pac-Man, especially to begin with - you can start on any of the first twenty stages for one thing! The game isn't likely to last too long if you do that but, unless you're going for a high-score, it's probably worth skipping the first few stages. As well as the foods, there are of course some terrifying monsters (which are called Bonzo, Wizza, Pippa, and Fido, by the way) residing in most mazes but the first two contain none and the next two only have one. This combined with Dizzy's slow walking speed means these early stages can be a bit of a chore. Things do get a bit trickier though, with later stages featuring all four monsters at once, so luckily there are also a few helpful items including ones that freeze the monsters, turn Dizzy invisible, speed up or slow down the game, and obviously a 'Power Pill' equivalent which lets you eat the monsters... until they come back a few seconds later. 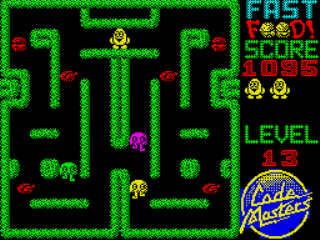 On the other hand, if you find the later stages too much, it might be worth playing the game from the start as you'll receive an extra life after every three stages (which is accompanied by a short animated sequence showing Dizzy brutally slaying a monster) and having a plentiful supply of lives can't be a bad thing! Much like the ghosts in Pac-Man, the idiotic monsters here have slightly differing skills (e.g. one is faster, another is smarter, etc) but they're not the only things that move around the mazes - the foods, which consist of chicken, burgers, pizzas, and milkshakes, are often moving around as well, and some of them (notably the pesky chickens) move nearly as quickly as Dizzy, and will actively avoid him too! If you should get outwitted by any foods and run into trouble, or just make a mistake, losing a life means starting the stage again. 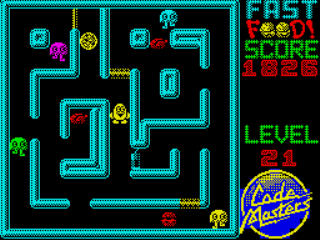 There are only three different maze themes which the game cycles through, namely what I can only assume are those composed of nice green hedges, yellow brick walls, and blue (sorry, cyan) metal walls, and the sprites all remain the same throughout. The sound is also minimal with a jingle after each stage is completed and a weird squonking sound when you collect a power-up. So, despite a couple of new (or at least less unoriginal) ideas, Fast Food is a pretty generic game and one of the less inspiring entries in the Dizzy series, but it still manages to have a certain charm. It's also worth remembering that it was a budget release, costing less than a pint of beer does nowadays, and with that in mind it's a decent game and good value for money. Then again, all the other Dizzy games were budget releases too, and most of them offer a lot more enjoyment than this does so it's probably only really worth bothering with if you're a Dizzy fan.