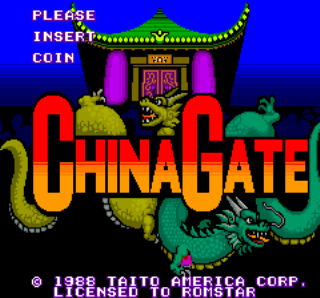 Sometimes I forget how prolific Taito have been over the many years, actually decades, since their inception. So many of their fantastic titles are now household names (in my household at least!) that it's easy to forget there are dozens of less well-known titles that bear their name as well. The example featured here is one I'd barely heard of and never played until recently - perhaps since it received no conversions - but it caught my eye immediately once I investigated it for this feature. Details of its story are scant but it seems that it's set in some sort of fantastical realm or another where the sacred Book of Sanzo has been stolen. Charged with returning it to its rightful place are three brave heroes - Gocoo (a monkey), Hakai (a pig), and Gojoe (a hawk, or some sort of bird of prey), who are armed with a staff, a trident, and an axe respectively. As these weapons (and the post title, I guess) may indicate, that means China Gate is a fighting game, and there are many enemies to fight before the mysterious book can be reclaimed and all that is good is restored.

Typically for such a game, one or two players can participate in the violent quest at hand which takes place across three missions, each divided into two stages apiece. Each of the stages are about two screens wide and three screens high and feature several tiers of platforms which our chosen hero (or heroes) can jump up and down at will. At various locations on the platforms are doorways which open immediately upon starting the stage and from which evil enemies emerge. You have jump and attack buttons to help you move around and smack up these cretins of whom there are never more than three at once. They each take a few thwacks to see off for good but they're quickly replaced by another from one of the the magic doorways. Then, after a seemingly inconsistent period of time (governed by a force that remains a mystery to me), the skies darken and lightning crackles to indicate the arrival of the end-of-stage boss - terrible creatures which take a good deal more thwacks.

Strangely, appearances aside, all three characters behave pretty much the same as far as I can tell. They can smack the enemies with their staff/trident/axe and perform a jumping attack, and if they hit the same enemy a few times in quick succession it's also possible to fling the goon back over their head, taking out any others they might hit in the process! It can certainly be a mighty entertaining way of dealing with them and, with two players involved, can result in bodies flying all over the place! It isn't the extent of the offensive options either. Some defeated clots drop coins for bonus points but some drop other items which can be used as more powerful one-off attacks. One shoots an energy bolt, for example, while another fills the screen with lightning! Any of these splendid magic attacks you might be keeping hold of are lost when you lose a life though, so stockpile them at your own risk. Having said that, it's worth trying to keep some in reserve for the boss fights - our heroes all have energy meters as well as a couple of lives per credit but the formidable bosses obviously drain this far quicker than anything else.

If you manage to reach the last stage, however, you'll probably notice quickly that the enemies there are clones (or relatives) of bosses from earlier stages. It is a rather short game though, so I guess it makes sense! Its initial appeal comes from its graphics which are quite detailed, varied, and the super-deformed sprites are superb. There's a lot of very bold colouring used and the Far Eastern-flavoured music isn't bad either. Within a few seconds of starting the game though, its appeal quickly moves beyond the stylish aesthetics. It's true that there aren't too many offensive moves (to say the least!) but the controls are great, allowing you to move around the various platforms quickly and accurately while the enemies follow you around, and it's tremendous fun leaping around smacking and flinging the idiotic minions about, especially if you have the chance to do so with a friend. China Gate is a rather obscure title but with a wider range of attacks, as well as a few more stages, I'm confident it would've been much more successful, and one of my favourite games of its type as well, no less! It's still great fun though, and well worth playing.