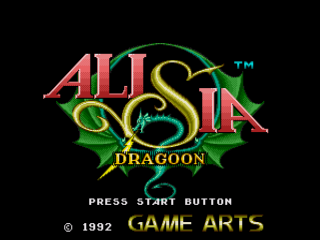 A good while ago now I borrowed the 'second chance' feature theme from that splendid fellow, Bryan, over at The Gay Gamer, whereby a supposedly great game that failed to 'grab' me the first time around is given another chance to do so. On that occasion the game in question (Gynoug) earned a small measure of redemption, and now I think it's time to return to another game from my MegaDrive days which I really wanted to like, and should have too, judging by the reviews it received, but... didn't. The game is of course Alisia Dragoon which features several stories of magic and intrigue and other fantastical stuff, depending on which version you play. I had the UK version and as a result I was charged with helping Alisia to take down Baldour, the 'very embodiment of evil', who's soon to awake from his hibernation and wreak havoc as he last did 13 years ago - a reign of terror which cost Alisia's father his life.

This wretched Baldour may have only just emerged from dormancy but he seems to have already assumed full command over his army of minions which are liberally distributed over the eight scrolling stages that make up the game. Some of the stages are divided into several sections but all of them end with a boss fight as you would expect. At least you only have to fight these foul creatures once though - many of the evil goons that precede them are sadly infinite which means Alisia has her work cut out for her! Her main means of tackling them is her Jedi Force-like lightning which targets most of the enemies automatically under most circumstances but it's also a charge weapon which, if unused for around five seconds or so, will sweep the screen with more powerful lightning upon first use. In addition to her Jedi skills though, Alisia also has a few friendly creatures to help her as well.

There are four of these helpful fellows altogether - Dragon Frye (a fire-spitting dragon), Thunder Vulture (who unleashs a screen wide thunder attack), Fireball (who is damaging to the touch), and Boomerang Lizard (a lizard who flings boomerangs, believe it or not). Alisia can select any of them whenever she wants but, despite their varied and useful attacks, you don't actually have any direct control over them. They also, much like Alisia herself, have an energy meter which is drained by contact with enemies and once they're gone, that's it (kind of). That of course means you'll spend as much time defending them from attacks as you will keeping Alisia as danger-free as possible, assuming you value their help of course! Several collectibles are available to make things a bit easier though. Some appear after a certain enemy is defeated but most of them can be found inside the floating spheres that are dotted around the stages (some of which are hidden).

These include items to replenish Alisia's health, extend her health-meter, and increase her lightning power-level (there are three levels in all), and there are other items that will do the same for your scaly/feathery/fiery friend. Less commonly encountered are items that keep Alisia's lightning fully-charged for a while, one to bring a dead companion back to life, and there are continues and temporary invincibility thingies to look out for, and even red fairies which create a makeshift platform for you too. Despite all this help though, Ms. Dragoon's adventure is a mighty tough one. The stages are generally, with a few exceptions, basic left-to-right affairs with a fair few up or down parts but, as mentioned earlier, many of the enemies are infinite. By that, I don't just mean that if you return to a previously cleared area, it will be occupied again. Oh no, no, no - here, if you were to reach some of the enemy-infested areas and remain stationary after killing them all, more would soon appear. Kill them and more appear, forever and ever, until the end of time.

I found this particularly irritating so decided to leg it instead (even though I usually prefer to take a more measured approach to games like this), but this resulted in just as much energy loss as the alternative thanks to enemies dropping onto me from nowhere or whizzing on the screen into my path - something made worse by the slight delay when firing Alisia's lightning. Basically then, however you tackle her adventure you're likely to be quite angry for a good portion of it. Unless of course you succumb to the pleasant graphics which are indeed mostly pleasant. Alisia is a fairly eye-catching hero, slightly reminiscent of a powered-up Yuko from the Valis series, and her Force powers and floaty companions are fairly impressive too. The enemies are a broad mix and consist of plants, slimes, various creatures such as bats, worms, pterosaurs, and swarms of small flying things, as well as plenty of idiotic human (or humanoid) soldiers and ninjas and all that kind of stuff.

Most sprites are nicely designed but it's the latter type which are most dangerous - some drop on you from above, some fly around on hoverboard things, some can even teleport and will suddenly appear very close by, and most of them are armed as well. The stages are quite nicely varied too. The first is the mandatory grassy area which descends into a temple and others include a scary swamp, strange mountains and caverns, a wrecked ship, and even a moving airship of some sort. Their length varies from one to another but their backgrounds and foregrounds, while generally quite dark (I guess this is hardly a Kirby game though), consist of some nice, detailed graphics, and they're all accompanied by some decent music and reasonable sound effects. Which is ruined by the highly annoying squeaking noise Alisia makes when she's hit by something - she's supposed to be a warrior, dammit!

Actually, now that I stop to think about it - that stupid squeak, the toughness of the game... noble intentions of not, perhaps Alisia simply isn't the right person for this job! She is a fairly appealing character though, and I still want to like her game; aside from the generic story, it's an adventure that features many things I like, further confusing me and my lack of affection for it - it's a platform game, there are dragons and all sorts of other mystical stuff, and even scantily-clad girlies - but I'm afraid it still hasn't really 'clicked' for me. I'm all for games that challenge players in the right way but Alisia Dragoon contains many unfair moments, a lot of unavoidable energy loss, the animal helpers don't really add enough to the game, and I don't really like the imprecise nature of the main attack either. It certainly looks cool from the screenshots, I think that's what drew me to it to begin with, the stages are quite well designed for the most part, and there are lots of good moments (there's even a stats/ratings screen upon death (or completion?) - I am a 'Worm Master' in case you're interested!), but it was just a little too annoying for my tastes.