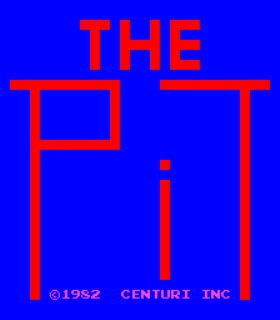 I'd like to think I'm fairly knowledgeable on the subject of video games but the earliest days are not really my speciality. Just this past weekend I was preparing to start the review process for a classic game that I have little experience of (yes, another one!) when I discovered that it was actually based on a game I have even less experience with - The Pit. Therefore, in typically OCD-ish Red Parsley tradition, I figured I should first take a look at this game. It casts you as an unnamed 'astronaut/explorer' who, upon starting the game, lands on the upper-left corner of the single-screen stage in his flying saucer. From there he has to tunnel down to the bottom of the stage to retrieve precious gems, then make his way back up to his ship, by way of the titular pit, before it's destroyed by the catchily-named 'Zonker', a hostile tank located in the top-right of the screen which gradually shoots away at the mountain that separates the two vehicles. As well as this 'time limit', there are many dangers lurking in the subterranean world as well, including enemies, lots of rocks and stalactites, as well as the pit itself. As you may have already guessed, The Pit therefore bears a passing resemblance to Dig Dug, released by Namco around the same time, and was also the inspiration behind multi-platform hit, Boulder Dash. 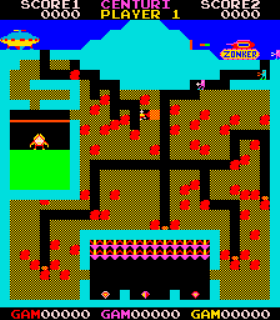 At the start of the stage there are a few mineshafts already - one leading from the Zonker, allowing the enemies access to the stage, and four more which lead to small jewels. Our greedy spaceman can collect these if and when he wants but it's the larger jewels in the cavern at the bottom of the stage that he needs. At least one of these needs to be half-inched and returned to his ship but as soon as you enter the cavern, the pink stalactites on its roof will start falling. The route to the cavern can be taken through any soft parts of the ground (the yellow stuff) but if you dig directly under a rock it will fall down. Contact with either of these things, or indeed the enemies who scoot about the place, will cost you a life. The only hazard against which you have a defence are the enemies who you can shoot (only while running or standing in a horizontal tunnel), but the toughest part of the game is the return journey, specifically the pit. Passage through this pesky thing is mandatory but it has a very narrow entrance and exit. No big problem there I guess, but as soon as you enter it, the drawbridge starts to retract, below which is a pool of green acid, as well as an apparently-acid proof creature! 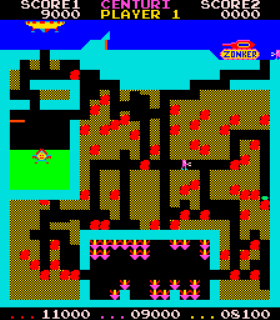 Falling into this unpleasant combination unsurprisingly results in death, and it can be quite tricky to avoid as well. This is down to the controls which, while fairly responsive, also require pixel-perfect accuracy. The entrance and exit of the pit are the same width as the player character so, while you're frantically trying to escape through the upper exit, if you're not perfectly aligned with it you'll be going nowhere. Well, except very shortly down into the acid! The enemies move rather speedily too, which means The Pit is a rather challenging game. There are twelve stages in all, but even if you were to somehow reach the final screen, it's been made impossible to finish - player movement is slowed down immensely which means there simply isn't enough time to retrieve a jewel and get back to the ship. However, each stage looks more or less the same (the positions of the rocks change but that's all) and the tiny sprites and slightly garish choice of colours mean that this isn't an especially nice looking game, and the sound is almost non-existent with just a few bleeps and bloops, so it's unlikely too many players will persevere that long anyway. It’s quite addictive to start with but its repetitive nature, unappealing aesthetics, and irritating controls mean it can quickly become frustrating to play. Dig Dug therefore remains my preference for underground-based tomfoolery!