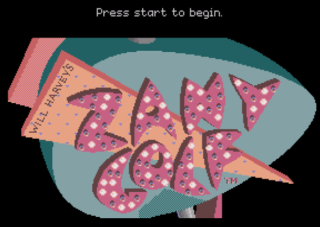 The MegaDrive was launched with some cracking titles here in the UK but one that failed to capture the attention of many gamers was this mini, or indeed 'zany', golf game. I was one of those who turned my nose up at it in favour of wonders like Golden Axe, Thunder Force 2, Revenge of Shinobi, etc, and for all these years have known it only for the very average magazine reviews it received and the same screen-shot that seemed to do the rounds in said reviews which showed a large hamburger of all things (the designer must've been hungry or something). My interest in golf games has greatly increased in the intervening years though, so I would say it's finally time for me to give this oft-ignored launch game a try, and seek out this most famous of fast food items in the process. 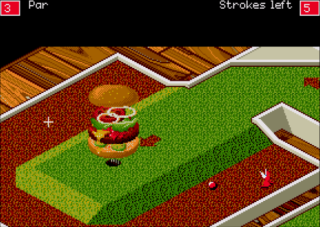 Originally released as an Apple IIGS game, Zany Golf is a rare example of one such game that went on to receive a wider release on more popular gaming platforms with this Mega Drive version appearing a good couple of years after the rest. All versions are more-or-less the same though, and consist of a nine hole course. Each is viewed from an isometric perspective and, in accordance with normal mini-golf convention, the starting position of your ball is generally quite close to each hole (snigger), but the route to it is far from simple with the intervening space consisting of winding paths, plenty of hills, and often various obstacles such as rising walls, fans, gates, buttons, false holes, and of course the aforementioned burger which bounces over its resident hole. This means that luck plays as much a role as skill does, at least to start with, and some holes will take a lot of practise. 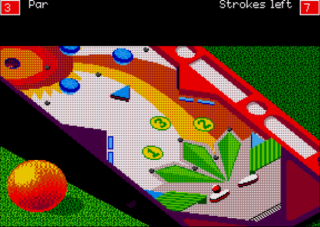 It's a very arcadey game to play though. Shots are taken by placing the cursor over the ball, pressing the button, moving the crosshair in the preferred direction and then releasing the button. Shot power is determined by how far the cursor is moved, and you can take a look around before taking the shot. You start the game with five strokes and, much like normal golf, each hole has a par value; each stroke you use over this value will be subtracted from your reserves - if you run out, it's game over. The only helping hand you can expect comes in the form of fairies which can occasionally be found in odd corners here and there and will award you a bonus upon collection (usually extra strokes), and sometimes extra strokes are also awarded for performing a particularly tricky shot on the first attempt such as entering the windmill on the very first hole. 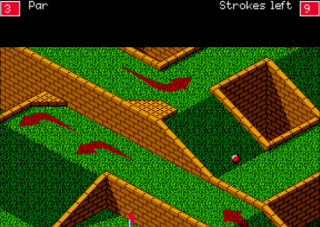 It's still pretty simple stuff though, and that includes the presentation and graphics which are more or less identical to those of the original - crisp, colourful, and tidy, but hardly forcing the MD to break out in a sweat. The music is pleasant enough too, but is less impressive than the original which was designed to make use of the fancy synthesiser in the Apple. These things considered, it's easy to see why no one really cared about Zany Golf at the time - it could've quite comfortably been converted to the MS instead of the MD - but that doesn't mean it's not an enjoyable game. It's true that it takes a bit of trial and error and a lot of practise but the holes are superbly designed - there's even a pinball table and a Breakout section, for example! Theoretically, some of them can be conquered by a single shot but that requires some very precise shooting as you might imagine, and is rarely pulled off. 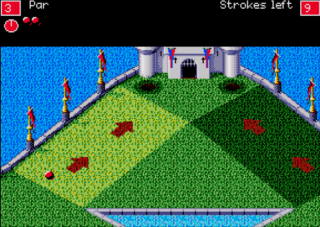 Zany Golf, then... celebrated on its native Apple IIGS, quite popular on the 16-bit computers, but shunned as a MegaDrive game. It was certainly a simple example of the genre to begin with and is pretty much a direct port of the computer versions which means there's not much to it. In fact, there's even one less hole here! Lord only knows why one of them (the 'Magic Carpet' hole in case you're interested) was left out but it's annoying as the mighty MD was more than capable of adding twice, even three-times as many 'holes', as well as tarting up the aesthetics, and that's probably the main reason for its lack of popularity on Sega's machine. I suppose it was never going to set the world alight though, and at the end of it all it is good fun, especially when competing against friends. It won't last long but it's worth playing!