Once video games were invented it didn't take too long for home gaming to get established too. A few 'electronic' games had started appearing in the 70's before the first actual home consoles arrived starting with the Magnavox Odyssey which, despite achieving limited success, spurred on others to try the same. Fairchild had their Channel F and later Mattel's Intellivision had been doing respectable business, but it was of course Atari's immense VCS that had destroyed all who stood in its way. By the early 80's even that was starting to look a little old and tired though, and this new breed of enthusiasts known as 'gamers' were eager for a more advanced successor. 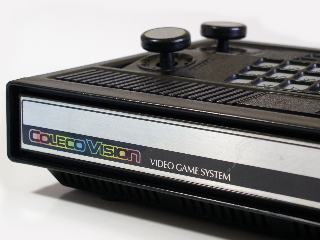 This soon arrived in the middle of that decade's third year courtesy of another American company - Coleco. Despite their name, which was a contraction of Connecticut Leather Company, and their history of producing plastic and indeed leather products, they were no strangers to the exciting realm of electronic entertainment. They had already produced a range of standalone consoles in the late 70's called Telstar which each featured a few pre-programmed variations of existing games such as Pong and Tank. Their latest effort was called the ColecoVision and, unlike the Telstar range, offered games on inter-changeable cartridges. In fact, it was bundled with one such game, a conversion of the popular arcade hit Donkey Kong, no less, and its quality soon showed that perhaps this new contender was the system gamers had been waiting for.

Unlike the blocky, low-resolution games found on Atari's machine, Coleco's games were like having an arcade in the home thanks to the Z80A processor that powered it. Indeed, many of the games it hosted were arcade conversions and most of them were close to arcade perfect - a term that had to be invented for their machine. 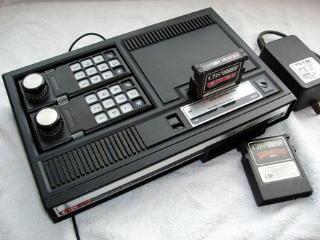 Thanks mainly to its many games of this type, the ColecoVision became popular immediately; sales soon surpassed one million units and several fancy accessories were released as well, including a steering wheel controller (complete with 'gas' pedal) and, ironically, an adaptor that enabled it to run Atari VCS games! Although this device automatically gave the Coleco a vast library of games, and provided a great incentive to buy it in the process, it was the system's own games that impressed the most and the number available quickly passed the hundred mark. Unimaginable success looked assured for the former leather company but sadly the sudden, catastrophic collapse of the US gaming industry, the infamous 'video game crash of 1983', then took their console down along with numerous others.

Happily for us retro gamers though, a good few titles were released before that unfortunate event brought things to an untimely conclusion and I've selected a few of them at random to help me determine whether 'the crash' was a curse or a blessing in disguise. Here's how I got on: 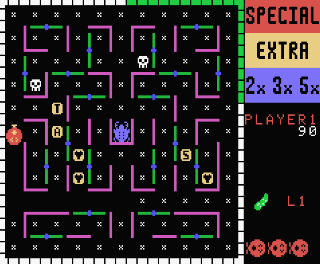 Arcade conversions represented a substantial percentage of Coleco titles and this one, whilst hardly a jaw-droppingly original game, was a top effort. As is obvious from the screenshot, it's a Pac-Man clone, but it may not be as generic as it first appears. As the titular beetle, your job is of course simply to collect all the dots (or x's in this case) around each maze. However, parts of the walls are made of movable gates (the green bits) through which your twitchy bug can move but the scary enemy bugs cannot. This is particularly handy as there can be up to four of them scurrying around and they move as fast as you do! The graphics are simple and there's no in-game music (aside from the odd jingle), but apart from a bit of detail on the bugs this is pretty much an arcade perfect conversion and as such is splendid! It's a fast-paced game which requires quick reflexes but it's great fun to play and very addictive too. A great introduction to Coleco gaming for me! This Data East title must be one of the more famous games to have received a Coleco release but it's also one that I've never really been too keen on, I'm afraid to say. It's a single-screen platformer - a type of game I generally do like, ironically - in which you, as Peter Pepper, must create tasty burgers by walking over the various components to make them fall down before the various evil foodstuffs who patrol the stages can stop you. Sounds good but I've always found it to be a rather frustrating game with unreliable controls. If you're one of the many who like the arcade game though, chances are you'll like this version too. The graphics are smaller and slightly more squashed but the stages are correct, the catchy music is spot on, and it plays just like its arcade parent. Not one I'll come back to very often but a treat for fans. 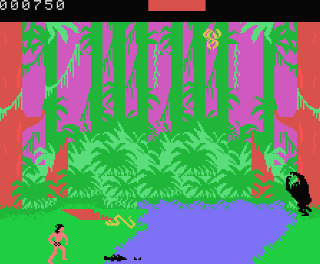 Even in the early days, most video games asked you to kill and/or destroy stuff so the premise of this game was a refreshing change. It instead asked you to rescue the 'Great Apes' and other animals that had been imprisoned through a tropical jungle filled with evil hunters and their allies. This may sound slightly familiar, and indeed, it didn't come as a big surprise to find that the game is also known simply as 'Tarzan'. It plays a bit like a slightly more advanced version of Pitfall and is viewed from an angled side-on perspective which allows Tarzan to more easily evade his foes. Unfortunately he only has a feeble punch versus their guns and 'Beastmen' but he can climb trees and swing from vines as well. It's a fairly interesting game with some decent ideas but is let down by two things - there are some unavoidable hazards such as trap doors that open beneath your feet, and the controls are also rather clunky, often resulting in unfairly lost energy (sometimes repeatedly). Good try but needs a coat of polish. 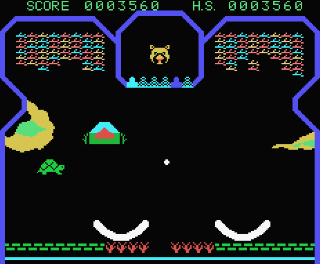 This one is almost that rarest of rarities - a Coleco exclusive (but there was an MSX version as well)! It's not a game I had previously heard of though, and its strange name provided few clues as to what I could expect. A subsequent perusal of the instruction booklet reveals that it's supposedly a weird pinball game but it actually plays a lot more like a weird Breakout clone. There are 'forested' areas in the top-left and top-right of the screen which can be cleared by hitting the ball into the 'trees' with two movable 'flippers' (actually just crescent-shaped bats). There are also animals (turtles, fish, etc) to kill for bonus points, two 'beaches' on the sides of the playfield, a moving 'beach house' in the middle of the screen, and an angry dog behind a breakable gate (although he looks more like a reindeer to me, complete with red nose!). So, like I said... weird! But, like most Breakout-style games, it's also rather addictive! 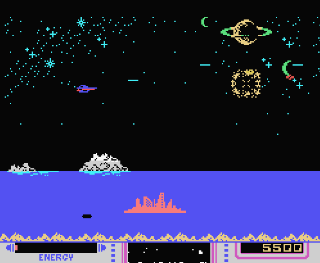 I was determined to find a shooter on Coleco's machine before concluding this feature and went for this one based purely on its title. Sure enough, it is indeed a shmup and, unsurprisingly for the day, it's one based on Defender. As Nova 1, the last of your fleet, it's your job to protect the six 'Capsuled Cities' that occupy the looping planetary surface. Much like Williams' classic, there are loads of airborne attackers to shoot down with your rapid-fire laser, but your ship can also drop bombs to take out the 'Water Walkers' which are the main threats to the cities. So, it's not very original but the graphics are detailed (I particularly liked the stars and planets in the background), the controls are responsive, and crucially for poor old me it's also an easier game than the hardcore Defender! Once again not an exclusive, but it still provided Coleco owners with some fast and addictive blasting action.

Verdict:
Despite coming from a less prestigious background than companies like Atari, Coleco did a pretty impressive job with their console. They were pretty brave, too, releasing it while the VCS was so dominant. It must've been a bit like Sega, and Atari again, trying to muscle in on the handheld market which Nintendo has sewn up with the Game Boy, to use an analogy that I can personally relate to, but on this occasion it worked. Or it seemed to be working until the entire market imploded in the US, ending their dream, and those of many other companies as well.

It's always a shame when a system goes down before its time, of course, but for many the ColecoVision's untimely demise was particularly upsetting. It was similar to other system's that emerged around the same time such as the MSX and Sega's SG-1000, technically, and accordingly these platforms shared numerous titles, and many of the Coleco's other games were arcade conversions. This obviously meant that it had very little exclusive, truly original software. Perhaps it would've received a steady flow of titles like this eventually, if things had gone differently. However, the bulk of the user-base of the aforementioned systems was in the Far East which meant the Coleco received ports and conversions of games that many Western players hadn't seen before, and generally their quality was of a very high standard.

My personal experiences of the ColecoVision are vague. I'm sure I knew someone who owned one when I was young but I can't remember actually using it much, if at all. That obviously made my time with it for this feature my first such experience and it's one I've enjoyed a lot. Having already spent a good amount of time with some of the systems to which it is technically similar, there wasn't really much here that surprised me, but most of the games I tried (which included several more not covered in this feature) were pretty slick and playable. The controllers were never particularly popular of course, but several peripherals had already been released for the ColecoVision (including the cheeky VCS adaptor!) and others were on the way including a new controller, so there seems to be little that would've prevented the system from going on to great success.

Sadly though, all we can do now is imagine what might've been. Coleco did (perhaps unwisely) try to follow up the 'Vision with a home computer version called the Adam but, while compatible with all of the console's software and accessories, it suffered from a number of problems and never really even got off the ground and its failure pretty much put the final nail in Coleco's coffin that hadn't already been hammered in by the market crash. I suppose if I had to sum up the ColecoVision's legacy, I'd say that it was a good piece of kit with some good games, but it was simply in the wrong place at the wrong time...