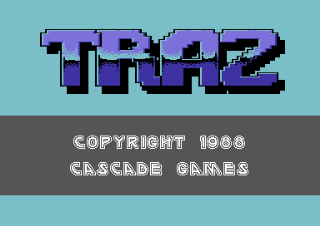 My first encounter with bat 'n' ball games, or 'brick breakers' as some prefer, goes back to the original Arkanoid game which I had for my Speccy, but as much as I might have enjoyed it I didn't have the opportunity to play too many other examples, owing mainly to the various systems I owned in my younger days. Since starting this series of features at Red Parsley, however, I keep hearing the same word in the comments after each post - Traz. These comments exclusively talk about it with reference to the Commodore 64 so I've always assumed it was one of those games I missed out on as a Speccy owner. Looking into it for this review, however, reveals that it was released on all of the 'Big Three' 8-bit micros, so how did I miss it? Could it be because it sucks arse? Are these C64-owning oafs playing an ill-mannered prank on me? If they are, it's their version I'm going to slate so let's find out (hee hee!). 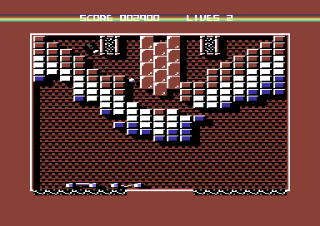 Whether good or bad, it certainly doesn't take long to discover that Traz isn't your run-of-the-mill Breakout clone. It takes place within an 'electronic prison' which is represented by 64 stages or 'cells' arranged in an 8x8 grid. You're started in a random cell and can only unlock it by destroying all the 'neutron bricks' contained therein. Once this is done you're given a choice or which of the adjacent cells you want to move on to (well, at least some of them). This kind of thing obviously improves longevity but the way the stages are designed is rather creative as well. You don't simply need to prevent the ball from disappearing into the void beneath the screen - it's only the crackly energy barriers, or 'goals', that you need to keep the ball away from here. The thing is, there's often more than one goal and they're not necessarily on the bottom of the stage either! 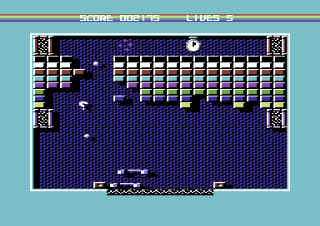 Indeed, the goals may be on any side of the screen, multiple sides at once, or even in the middle of the screen somewhere. You might think that this would be impossible to manage with one bat and you'd be right - that's why you usually have two or even four bats under your control at once! These might be one on top of the other or they might be on opposite sides of the screen but they're all controlled simultaneously simply by using the four joystick directions. The bricks are usually arranged accordingly and often take the shape of particular items rather than just random-looking jumbles. There are a few different brick types though, including the usual basic ones in assorted colours, inconveniently-located unbreakable ones, and glass refractors which are also unbreakable and alter the path of the ball as it passes through. In addition to these there are also generators which release monsters who also deflect the ball as it smashes through their brains. 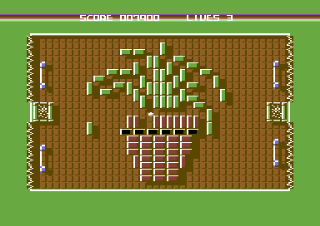 As if all this didn't keep you busy enough, some bricks also release a question mark when destroyed (accompanied by a floopy sound) which have an appropriately random effect. These can include speeding the ball up to Warp 9.975 (or something), slowing it down an equally surprising amount, making is semi-controllable, releasing multiple balls, equipping your bat with lasers, unleashing a 'power ball' which ploughs through multiple bricks at once and, most helpfully of all, clearing the screen of bricks altogether! Despite these (mostly) helpful things though, clearing all the the 'cells' and gaining your freedom is still an enormous challenge which is beyond my abilities. Fast reflexes are required for most games of this nature but Traz is perhaps the most hardcore of them all. 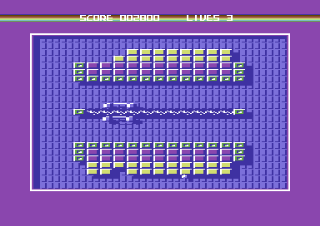 The multiple bats/goals presents its own challenges of course, but it doesn't help that many stages feature bricks scarily close to both, and the ball comes straight down towards your bat at the start of a life too, as opposed to the opposite with most similar games. The collision-detection is also a bit untrustworthy - it's not too bad generally but I wasn't as confident clipping the ball with the edge of the bat as I am with Arkanoid, for example, and since this is usually done to direct the ball, some stages ended up taking aeons to finish off. Everything moves very smoothly though, and the graphics are rather nice - the brick arrangements are usually quite interesting, there are various background patterns, and everything is very colourful, although some colour combinations are a bit gaudy and there's an annoyingly large border around the playfield as well. 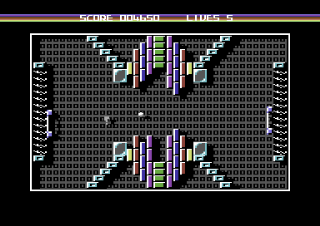 That super-famous C64 sound chip doesn't get much of a workout here either. There's a lively title screen tune but no other music and few effects. Fortunately however, these various negative points are minor and do little to dampen the appeal of Traz which, thanks to the variety of its stages, as well as their random/selectable nature, is among the most hectic but also most addictive games of it type. This would most likely be enough in itself but Cascade have even squeezed in two extra play modes - a simultaneous two-player mode (although it's a bit harsh - if either player's goal is breached, both players lose a life!), and even more impressive is a surprisingly comprehensive level constructor/editor. With the exception of the much more recent Wizorb, I think Traz must be the most varied and original Breakout clone there is, and partly due to that it's also one of the most enjoyable. I'm not sure how I missed it on the Speccy but I'm sure glad I was hounded into playing it. C64-owning oafs - you are excused!