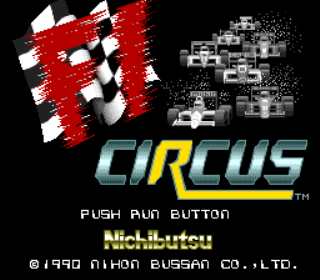 As well as having the distinction of being one of my favourite types of game, overhead racers, or 'top down' racers as some prefer, are also one of the oldest genres with Atari's Sprint series dating all the way back to the mid-70's. That series, which includes one of my favourite examples of the genre - Super Sprint, is of course inspired by F1, but there is another series based on the same sport which debuted much later that I've never even played! There are now over ten F1 Circus games (and no, it's not a mistranslation - the 'circus' apparently refers to the somewhat overblown pageantry of F1) on a variety of systems but, as usual, I'll start my coverage of the series with the very first one which is best known on the PC Engine (the NES version didn't appear for a couple more years). That means, owing to the absence of a TG-16 version, much of the text featured in the game is in Japanese (which I can't read) but I'm hoping it won't interfere too much with my 'research'. 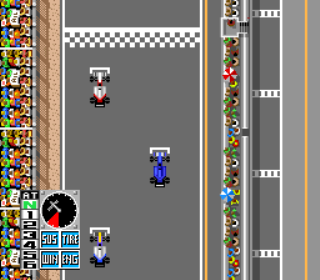 Happily, the menu and options screens are in English (I've never understood why Japanese game developers often do that but I'm not complaining!) and they reveal the existence of two game modes - Championship and Constructors. Unsurprisingly for a game of this age, there's no official license, so the drivers and teams are merely garbled versions of the real ones (Plost drives for Ferrali and Senma drives for McRaien, for example). Of the two types of game offered, the Championship was my first choice where you can enter any name you like and then choose a team. Then it's on to the pre-race menu from where you can check the next circuit (including the expected weather), tinker with the car settings (steering, wings, tyres, suspension, brakes, gears, and transmission can all be adjusted), enjoy a 'free run' to try out the course, or race which is called 'practise' here. That's because, as per an actual F1 weekend, you have a practise lap, then a couple of qualifying laps, and then the race itself, although I didn't realise this at first as you're not told what kind of lap you're on as each follows on from the previous without pause. 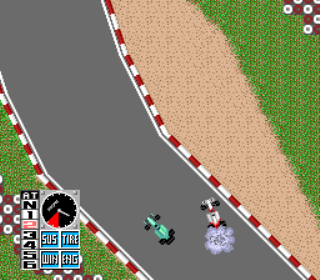 The races are viewed from directly overhead and for a vast majority of the time you'll be driving up the screen, with a series of vertical straights punctuated by regular left or right turns, usually straight diagonal sections, at varying angles. You can choose what length of race you want too - the default is the smallest number of laps (usually around 7) but you can also race over double that distance (14), double that (35), or even double that again (70). The latter is perhaps a little over the top but it may not hurt to select a slightly longer race as your car can be fairly easily damaged and will then need repairs in the pits which obviously takes up valuable time. There are four parts of your car that are susceptible to damage, sometimes from general wear and tear (especially the longer races), but more often from collisions or running off the course. Suspension (which affects steering), tyres (which affect grip), wings (which affect speed), and engine (which... ummm, also affects speed) can all be damaged in two stages. 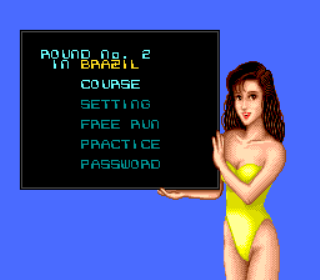 All four of these vulnerable parts of your car start off blue which is good, but if you don't treat it well one or some of them will eventually turn yellow, which means they are slightly buggered. If repairs are not then sought, further tomfoolery could result in them turning red, which means they are completely buggered and dramatically impair your chances of success until they are repaired. The other cars need to pit as well but the fewer times you do so the better your chances will be. Although an impact at any speed can be be recovered from, often after lots of scary sliding and smoke and stuff, it's possible to suffer an immediate retirement if your car ends up in a wall or something after a crash. Annoyingly, you won't get another chance at the race either - it'll just go down as a 'DNF' in your championship progress. If you do manage to finish, points are awarded to the top six cars in much the same manner as real F1 of the day (i.e. not a million points for a win like today); finish the season with more points then anyone else and... well done, you're World Champion! 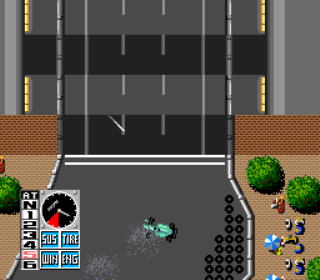 The Constructors Mode, on the other hand, is a bit less obvious. Up to five players can take part and selecting it gives you the choice of four teams. Then follows many pages of Japanese text I didn't understand while the odd car whizzes past in the background, after which you have to stop a random number counter for both your preferred team's drivers (which I assumed determines their qualifying position). Then the race starts as normal, except... it's not normal at all - the cars are driving themselves! Indeed, it turns out that, unknown to me thanks to the Japanese text, the players take the roles of team managers while the (aptly named) console does the actual racing (don't worry, it's quite good - better than me at least!). An understanding of kanji is obviously required to make the most of this game mode but it's a fantastic addition and the first such one I've encountered in a game like this. For lingually-challenged dunderheads like me, though, the F1 Circus experience is limited to the Championship mode, so I hope it's a good one. 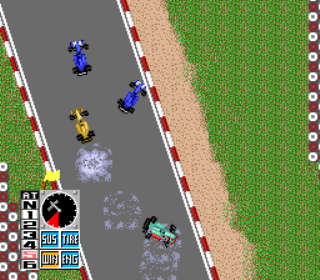 Well, there are some ways in which F1 Circus is the finest overhead-racing game I've played. Having a proper, full championship season is superb in a game like this and gives it a lot of longevity beyond merely trying to improve lap times and the like. There are also tonnes of options and settings to play with, and it's very fast. The graphics are pretty nice too - there's nothing amazing from a technical point of view and, being F1 circuits, the scenery doesn't change much, but the scrolling is smooth and fast, the cars and track-side areas are nice and tidy (with authentically-coloured cars, of course), and there are lots of decent intro and presentation screens as well. Audio-wise, the effects are limited beyond a fairly realistic engine sound and it initially appears as though there is no in-game music but it starts up after your first lap and is actually quite pleasant, consisting of numerous jingles (there's even one for pausing) as well as tunes for each race as well. 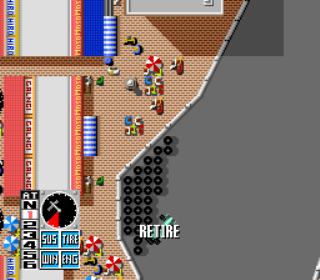 It's not perfect though, of course. The first time I played F1 Circus I was skidding around and bouncing off barriers every five seconds! The aforementioned speed was one reason for this but the steering is also rather sensitive. The latter can be adjusted by tinkering with the car's settings but it's also necessary to drive cautiously and learn each course, at least to start with. This is therefore one game where the arrows warning of upcoming corners are vital, and so is using the brakes if you see a red arrow! It's a surprisingly tough game to master though - contact with the other cars is usually just as dangerous as clipping a barrier or something and this can be a particular problem at the start of a race (unless you somehow managed to qualify in pole position, which I never have so far) as most of the other drivers start rather slowly making very difficult to not crash, unless you start slowly on purpose of course, but that's no way to win a race! 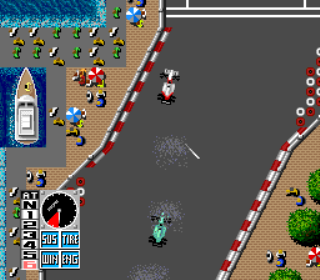 If you manage to survive the first half-lap or so without hitting any cars or roadside stuff though, this is a challenging but winnable game. The cars do actually get spaced out during a race so you shouldn't necessarily lose too many places by pitting, and it is possible to make an opponent spin out without crashing yourself too, although it's a risky manoeuvre. There are a few small things about the game that annoy me such as the narrow pit-lane entrance which makes it easy to miss (and can then mean driving another entire lap with a major problem, pretty much ruining your race), there's no 'quick race' arcade mode, you can't skip the practise or qualifying sessions, and and the weather effects are a bit tame (see the solitary speck of rain in the 'wet race' above) but, after a mediocre first impression, F1 Circus has turned out to be an addictive and enjoyable overhead racer with more depth than most I've played. There's even a password save option which is handy since the repetitive nature of the courses would soon start to grate if you had to finish the game in one sitting. So, not perfect then, but still a pleasant surprise! I like real F1 very much but there aren't too many games based on it that I really like, so it's nice to discover this one. With a few tweaks it could've been my all-time fave, but I guess that's what sequels are for...