We all have our favourite game system but what qualities earn it this prestigious rank for you? For most, it's probably the quality and/or range of titles available, pure and simple. Generally there are many game developers to thank for this but every now and then one appears who goes on to release a succession of high-quality titles on a particular system to such an extent that they alone become a major reason for owning said system.

Two examples I remember well are Ultimate for the Spectrum and Team 17 for the Amiga, but the period that stands out most for me was that of Rare, ironically the modern incarnation of Ultimate, and their run of releases on the Nintendo 64.

In the eyes of many, Rare's releases for Nintendo's black slab, whilst not always particularly original, were so consistently superb that they even eclipsed those of Nintendo themselves. I'm not sure I'd go quite that far myself but they certainly contributed a great deal towards the success of the N64 and my enjoyment of owning one. They released more than ten games for the system in total; none of them sucked but these are my five favourites: 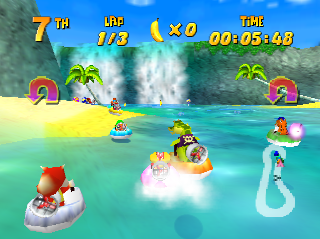 Many consider the N64 instalment of Mario Kart to be the weakest so you could say Rare didn't have to try very hard to improve on that particular title, but that didn't stop them from coming up with this stonking game anyway! It was very similar in concept though, to be sure. As well as offering four-player tomfoolery, there's also an 'Adventure' mode as well as the usual 'Quick Race' option. This offers a series of semi-explorable worlds which each contain several racing circuits and a boss. The worlds are based around four themes - a normal grassy area, bright sandy beaches, twinkly snow/ice, and fiery lava-filled caverns, and there are ten characters to choose from (including a pre-sweary Conker), but the best part is that there are three different vehicles to use, with aircraft and hovercraft in addition to the usual carts. It's still not a perfect game - the bosses are teeth-shatteringly tough for one thing - but all the other stuff helps make DKR more varied than Mario's game whilst remaining at least as enjoyable. Great fun for any number of players. 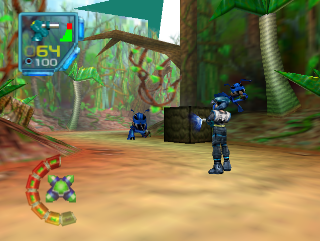 This sci-fi-themed adventure is the most recent game on this list and is probably the one that most divided the opinions of N64-owners too. Well, for Rare standards, at least - even its critics thought it was pretty good, just not super amazing as was usual for them! It stars the last three members of the Jet Force military group - Juno, his sister Vela (complete with tiny skirt, naturally), and their dog (sorry, 'wardog') - who are all that stands between the dark tyrant, Mizar, and the destruction of all that is good. A majority of the game takes the form of a third-person shooter and spans lots of large, non-linear worlds filled with evil insect enemies to shoot as well as survivors/prisoners to rescue. It was probably Rare's most technically advanced game to date and was vast in scope as well as featuring gorgeous graphics. Again, it's probably not the most original game ever, but there's a lot here to see and do and it lasted me ages. Jet Force Gemini may have left a few people unfulfilled but for most, me included, it's a fantastic game. 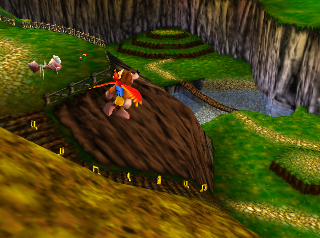 After successfully knocking his racing game from its lofty perch, Rare were bound to have a shot at Mario's platforming crown as well. The result was Banjo, a hillbilly bear, and Kazooie, a lairy red bird who lives in his backpack, who are on a joint quest to save Banjo's sister from Gruntilda the witch. This involves exploring nine large, open, non-linear stages which are absolutely packed with millions of things to collect. Some items need to be grabbed (such as jigsaw pieces to open up new stages) but most are optional and are merely there to encourage you to explore the vast lands on offer. It's well worth doing, too, as they are superbly designed and very detailed, hiding numerous secrets and even some other friendly characters to offer help or advice. It's probably not quite a Mario-beater this time (Mario 64 is a masterpiece, after all) but Banjo's first adventure is still a game of exceptional quality, from its stunning and appealing graphics and catchy tunes to its enchanting (and often amusing) gameplay, and one which can proudly stand next to its contemporary. 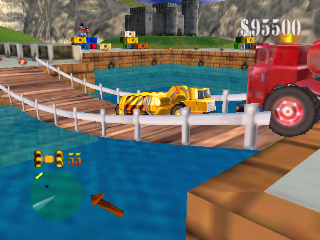 Some of their other releases may have been 'inspired' by popular works by other developers but that doesn't mean Rare were incapable of coming up with their own ideas. A perfect example of that is Blast Corps which was not only a technically impressive 3D game (as demanded by gamers, of course) but was also pretty much a new genre in itself! The concept was simple – a truck carrying leaking nuclear missiles must be directed to a safe detonation site as quickly as possible – in other words, in a straight line. Your job is to clear the way for it by destroying everything in its path! This is done using a variety of vehicles from normal cars and construction (or deconstruction, in this case) equipment to huge flying robots. Yes, it is as awesome as it sounds, and would be splendid by itself but the stages are packed with stuff to find and secrets to unearth and will keep you busy for eons, and the soundtrack is one of my all-time faves as well. A uniquely enjoyable game which is still to be even copied, never mind bettered. 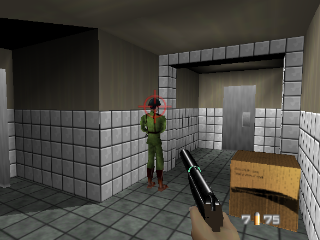 I know not everyone thinks very highly of this title but most do, so apologies if the predictability of its position in this list disappoints anyone! I received it with my N64, bought during one of my reckless credit-card splurges, and it has remained one of my top-three most played games on the system by any developer. Not only is it a rare (hee!) example of a licensed game that actually adheres to the plot of the film on which it’s based, but it did so while incorporating some of the most finely-tuned and atmospheric gameplay imaginable, and all the while losing nothing by the absence of keyboard/mouse control - arguably the first console FPS to do so, in fact. There are many reasons for Goldeneye’s splendour though; as well as being pretty much flawlessly made in every way, I think it was just in the right place at the right time. Perfect Dark is also a fantastic FPS to be sure, but does it let you play as James Bond? Nope, so case closed if you ask me!