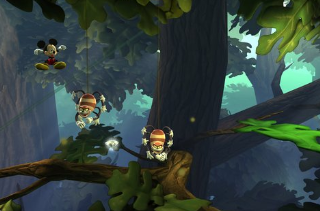 There can't be too many owners of the mighty MegaDrive, whether former or current, whose eyes don't mist up at the mere mention of the words 'Castle of Illusion', so I think it's safe to say this update (or reboot?) by Sega is one that's been excitedly awaited. The big question is: have they produced a fitting tribute to the original, an entirely new game, or have they conjured up a stinker to tarnish our cherished memories? Based on my first impressions of this PSN version, I'd say the first of those would be the most accurate classification (despite the fact that the stages are only based on those of the original rather than direct copies), and that does of course means it's a platform adventure spread across several themed worlds featuring many dangerous creatures, and indeed a good few spooky illusions here and there as well. 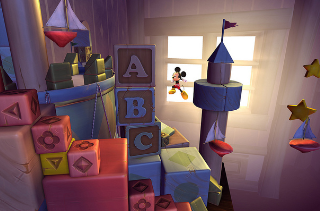 As good as the original release was, however, it was still just a platform game and nothing more. This version makes an attempt to turn the game into what basically amounts to an interactive Disney cartoon, and it largely succeeds. The gameplay is more or less the same, simply asking you to guide Mickey from one end of a stage to the other, but there's now a few 3D sections (including, splendidly, the giant rolling apple!), and the presentation has been dramatically revamped as you would expect. The intro is much longer and includes narration, as does the game periodically, and the graphics are fantastic throughout - you'll most likely spend as much time admiring the beautiful backdrops as actually playing the game, and the soundtrack from the original game has also undergone a nice remix too. It's still quite easy but Castle of Illusion's stronger 'fairy tale feel' and fancy new look make it great fun for newcomers and essential for fans of the original. More remakes like this please!