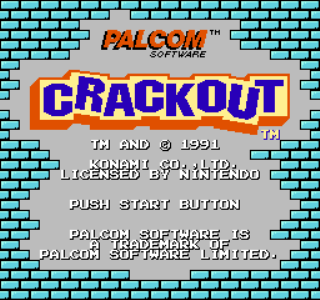 In my last review for this series of features I spoke of the lowest magazine review score I could remember from back in the good old days but I may have spoken too soon. Recently re-entering my conscious mind from the dark realms of depravity that lurk in its basement is this game; an NES game which was rather unusually released in neither the Japanese nor American markets. Us lucky Europeans got to sample its delights though, but probably not too many gamers bothered based on the review I can now vaguely recall which savagely hacked it to pieces, then ate and pooped out the pieces, then set them on fire, then peed on the ashes. Such savagery was probably as much in jest as genuine disdain but I think it's likely that Crackout is not generally viewed as the pinnacle of its genre all the same. I'm nonetheless keen to find out just how bad it really is, especially since it's an example of a genre I'm rather keen on, no less. So... shields up, phasers on stun, energise...

Much like the Supreme Lord of the genre itself - Arkanoid - there has been an attempt to set the mood here via a rudimentary back-story. There are 44 single-screen stages in total which apparently represent the defence system of the central computer at the nerve centre of Planet Selim whose self-destruct sequence has been activated. Clearing each stage of bricks will gradually reveal a 14-character keyword which can be entered to end this process, although to what end isn't clear. What's clearer is that the means of doing this is pretty much the same as always. The stages are divided equally into four areas - Cubic Zone, Mirror Zone, Tube Zone, and Final Zone. The various coloured bricks found in them have differing points values and all are destroyed by one touch of the 'superball' aside from white ones, which require up to four strikes, and silver ones which are indestructible. The stages are also home to several evil alien creatures (although I'm not sure how they got there) and it is from these rather than the bricks that the now-standard power-ups capsules emerge.

The aliens emerge from trapdoors at the top or in the middle of the playfield. There are never more than three of them at once and those that are destroyed are immediately replaced. Since most of them drop power-ups when hit, that means there's usually plenty to choose from. They include the usual stuff such as a ball-slower-downer, a bat-enlarger, an enemy-freezer, a splendid power-ball which ploughs through multiple bricks, an extra ball, a ball-exploder whose shrapnel damages stuff, and missiles which gives you four remote-triggered projectiles, each of which can potentially take out a good few bricks. With all these handy bits and pieces in such abundance, and considering the large size of the bat (which is actually a spaceship, by the way, presumably a microscopic one), you might think Crackout is a rather easy game for its type, and that definitely seemed to be the case initially. First impressions, you see, indicate that Palcom have produced a decent, if somewhat generic and rather easy take on the age-old genre, but prolonged play reveals two problems.

The first of these is the graphics which are nice and organised and geometrical, and the choice of colours isn't bad either, but they change very little through the game. The biggest culprit is the dull, grey brick pattern which is permanent, but there's not much variety with anything else either, even from zone to zone, never mind from stage to stage, and to make things worse, there's not even any in-game music. The other problem is the design of the stages. At first they seem fairly standard, if not overly creative, but then you'll start to encounter some increasingly annoying ones - the type that require super precise shots and a lot of patience. That could be said of most Breakout clones, I know, but things get rather ridiculous here. Many stages place the lowest bricks about an inch above your bat, for starters, and there are some really annoying brick arrangements, particularly of the type places a handful of normal bricks behind one or several layers of multiple-hit or even indestructible bricks with only a one-brick gap to aim for.

This means you pretty much have to make the exactly the right shot at the right time, over and over. Another particularly memorable stage has the only destructible bricks completely encased in indestructible bricks meaning the only way to finish the stage is to wait until an enemy gives you some missiles. Since the power-ups are distributed randomly, that could therefore take ten seconds or ten minutes - if you even last that long, obviously, but with so many stages requiring this sort of accuracy, as well as the usual quick reflexes (helped by a button which moves the bat faster), there needed to be a higher degree of control over the ball. It's passable as it is but will still leave you bouncing the ball around for lord knows how long, trying desperately to make the right shot. There is a password system I guess, but still! Ironically, some of the easier stages are the ones that contain the occasional larger enemies - bosses, I suppose - but this is still a game that, after a promising start, quickly revealed itself to be one of the most frustrating examples I've yet played. I still think the magazine score that prompted this review was rather harsh - it's not that bad, but it's still pretty disappointing stuff.