For most of us, gaming is a casual interest or pastime. Regardless of how 'hardcore' you may or may not consider yourself, and regardless of how many hours you spend in front of the screen, video games aren't actually that important when it comes right down to it. That's not to say, however, that time spent with them is wasted. 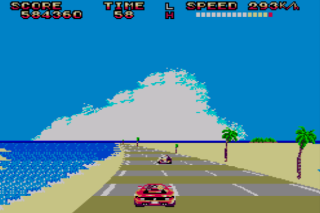 The virtues of our hobby are often argued about but one that seems to get taken for granted is that of nostalgia. Sometimes it might be the games themselves, other times it's incidents or periods in our lives that are associated with them, but being reminded of them, usually by way of a certain sight, sound, or even smell, and often suddenly and unexpectedly, can bring a flood of long-forgotten memories and warm feelings rushing back, and that's exactly what recently happened to me. There I was sitting at home writing a post for this very blog while listening to music on my MP3 player which features many thousands of songs, both game music and 'normal' music, when suddenly a tune started that I hadn't heard since many moons ago in my youth. This happens now and then of course - sometimes the tune is slightly familiar, other times I don't even remember it, but on this occasion I recognised it instantly. 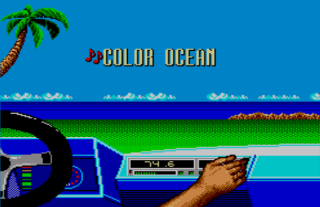 The chiptune in question was from OutRun 3D on the Master System, probably the console for which I retain the most affection, and one which I wrote about shortly after starting this blog here. OutRun is rightly regarded as a classic but this 3D MS version is not really remarkable in any way gameplay-wise. It does, however, feature a new tune - Color Ocean - and it was upon hearing this again, after all these years, that stirred me so. It did remind me of playing the game itself, of course, but it was more a strong flashback to that period in my life generally - a time when life was simple and I wasn't yet burdened with worries and responsibilities. I suppose it's easy to desire a return to such times but the warm, fuzzy feelings were so strong it was actually quite emotional. And all thanks to a plinky-plonky Master System tune I hadn't heard in more than 20 years. It would probably sound ridiculous to a non-gamer, but the game, more specifically this tune for some reason, was merely the catalyst. Those were the days indeed...

Has anyone else experienced a flashback triggered by something game-related? I'm sure anyone who's been playing them long enough either has or will have, and hopefully they will be pleasant! This is the tune that that did it for me which will no doubt sound like, as I said, a plinky-plonky Master System tune, but it's one I'll now always enjoy listening to.