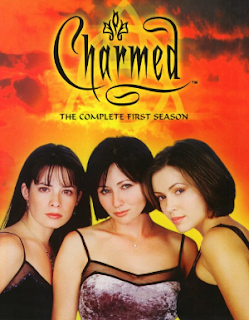 Tagline: "The Power of Three Will Set You Free"

Love them or hate them, the Americans do contribute a rather sizeable percentage of the world’s TV shows (as well as many other entertainment media). Their competence at this no doubt varies wildly depending on who you ask but, for me, the 80’s were pretty awesome. When I was growing up, shows like The A-Team, Dukes of Hazard, and Airwolf were the greatest things ever, but when we reached the mid-90’s things took a dramatic downward turn when a new trend reared its ugly head. Shows started appearing which were filled with good looking and/or popular actors/actresses but which had no other redeeming qualities. They were usually playing characters for which they were completely ill-suited and were therefore not convincing as, the premise of the show was usually ridiculous, or at least unrealistic, the stories barely existed, and the characters were usually boring. Shows like Buffy, Dark Angel, Alias, etc, are prime examples of this curious-but-unwelcome trend but one of the last to appear was Charmed.

The show focuses on three sisters named Prue, Piper, and Phoebe (played by Doherty, Combs, and Milano respecively), and starts shortly after their grandmother passes away. While putting her affairs in order they discover that her large old house isn't the only thing they inherited from her - it seems that she was also a witch. Then, while investigating her stuff, Phoebe reads a passage from an old book in the attic which - lo and behold - bestows magical powers on all three sisters! They only get one 'power' each though - Prue gets telekinesis, Piper gets 'molecular immobilisation' (she can 'freeze' people, in other words), and Phoebe gets premonitions! Even at this early stage, though, the first episode ends in much the same way as all the others do - a mysterious demon/warlock turns up to do them ill, the newly empowered siblings then use their powers to stop him/her - a responsibility they then have to try and juggle with their normal, everyday lives.

So yes, the show is basically one of those generic 'monster of the week' affairs centred around three attractive ladies. As far as I can see, the creators could've then gone down one of two routes - either make the show a semi-comedy featuring various 'fish out of water' antics as the girls get used to their powers and try to continue their jobs/relationships, or make it a serious and foreboding drama based around the dark arts and their practitioners. The reality is somewhere between the two. There is little comedy with most of the running time taken up by the girls arguing with each other, tracking down and/or battling the various rapscallions that try to best them, and trying to keep their witchiness secret from their friends and, more often, the authorities. The only trouble is, as nice as they are to look at (especially Ms. Milano's chest), none of them are remotely convincing in their supposed ability to defeat... well, anyone really, and nor do they seem smart or disciplined enough to realistically cope with their situations - they're just a bunch of ditzy girls!

Part of the problem is down to the questionable casting choices but, frankly, the acting is substandard from all quarters really, especially from most of the guest stars. It doesn't help that most of the dialogue is so poor either. None of the characters seem convincing while talking about demons, magic, ancient prophesies, and all that other mystical stuff, and some of it is very clumsy (like the constant references to 'use your powers'). Even the normal everyday gossip and banter doesn't seem natural much of the time. This is even worse outside of the main core of characters as few of them are given much, if any background, so you don't generally give two shits about whether any of them succeed or not. Well, I didn't, anyway! The main point of interest for me was Alyssa Milano's knockers (which are frequently on display in one form or another), but I guess that was kind of the whole point.

The worst thing about this dull show, though, is the many gaping plot-holes and helpful coincidences which usually allow a quick, clean conclusion to each episode, and that makes near enough every one hugely predictable and therefore boring. Even the very premise of the show and its stars is casually cast aside when it suits. They keep making this big thing about the 'Power of Three' and how their 'powers' only work because the three fabled sisters are together and all that crap. Then, when Shannen Doherty got the boot for being too much of a bitch (allegedly), they manage to find another 'long lost' relative who also has 'powers' and is immediately integrated into this supposedly-exclusive 'Power of Three' club. Sorry, I'm sure lots of people like Charmed, but this type of show really makes me angry. I know I should just leave its fans to enjoy it but it just seems so unjust that something like this can run for eight seasons while some truly inspired, innovative shows get cancelled after one or two seasons. I know, I know, it's because stuff like this has more mass appeal. I think that's what makes me saddest of all.

Anyway, sorry, I didn't mean to ramble on for so long - this post was supposed to be a quick diatribe and warning to prevent anyone from having to endure such nonsense. You may wonder how I came to watch it when I already dislike shows like this. The answer to that is the combination of Netflix and being married, but even my wife, who loves all these 'supernatural' shows had given up on Charmed by the end of the second season which, in her own words, is "just too stupid". I can't promise it doesn't improve from thereon in but the ratings suggest consistency - good for fans, bad for the rest of us. I'm not even sure what kind of demographic they were aiming for, though. Usually these shows that are filled with 'pretty people' but little of substance are aimed at young males who are generally happy to just ogle the eye-candy accordingly but, beyond that, the only people I can imagine enjoying this show are teenage girlies who really don't know any better. I guess it could be pretty good fun for them; it may even 'charm' them, but not me I'm afraid...