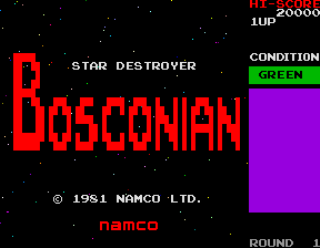 The main reason for starting this series of features was to further my knowledge of arcade games from pretty much the only era that was before my time but, despite knowing at least something about most of the popular games from this period, Bosconian is one of the few I knew absolutely nothing about. I'd heard the name before, of course, but I had no idea even what genre it was. It was quickly deemed a prime candidate, then, for this feature! So, to educate probably only myself, I've spent the past few days playing this Namco release and quickly discovered that it's an over-head-viewed, free-roaming, multi-directional shmup - a fact that makes my shame weigh heavily on my weary shoulders, but it's also widely considered the first such example of this sub-genre which makes my indiscretion even more shocking. 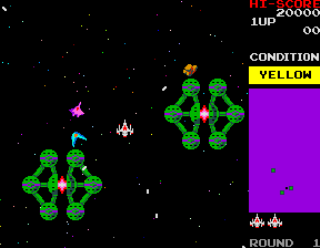 However, after spending some time sitting in the corner with a dunce's cap atop my head I returned to the game to correct my long-standing oversight and found out what most of you probably already knew: Bosconian is a game that features infinite stages (though the game only counts up to 'Round 255' before returning to zero) and the object on each is the same - to rid them of all the green enemy bases that dwell therein. Your means of doing this is a small but distinctive-looking ship which flies freely around the looping playfield automatically but can be moved in eight directions and can also fire forward and rear shots simultaneously. The bases are hexagonal and are each brimming with six guns. Taking out all the guns will destroy the base but a much quicker way of doing it (usually) is to send a well-aimed (or accidental) shot into the narrow gap between guns to hit the red core at the centre. 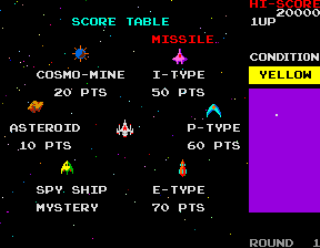 These bases may be the focus of your attention but there are also a few other things lurking around. Perhaps the most numerous are asteroids which tumble about aimlessly but there are also a good few 'Cosmo Mines' too. These are stationary but will explode if you get too close. Lastly, there are four types of enemy ships. Some come from the bases while others are just flying around, but now and then you'll be faced with a whole squadron of them which heads straight for you. The least common type of ship is the 'Spy Ship' which isn't very dangerous on its own. Let it escape, however, and the alert level is suddenly raised to red which brings with it a greatly increased number of malevolent ships from all directions! Contact with any of these things obviously costs a life but, helpfully, even after continuing on a new credit you'll still get to continue from the last point you reached, although your ship is always returned to its starting position. 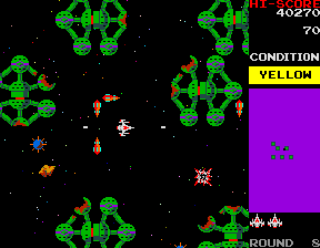 Each stage features a seemingly random number of enemy bases; sometimes they're arranged in a pattern whilst other times they're just dotted around, but you can keep track of them via the handy scanner on the right of the screen. Like most games of the day, then, Bosconian is pretty repetitive, but it's also one of the most addictive games of it's type that I've played - impressive considering it was also the first game of its type! The graphics are nicely coloured and quite detailed for their age and the sound effects aren't bad either (although the constant blooping of your ship makes the ears bleed after a while), but the most important aspect of a game like this - control of the ship - is thankfully superb which, along with a well-graded difficulty level, allows for some lengthy games and huge scores. I'm still not sure how I've managed to miss it all these years but it seems I've been missing out on a corker!