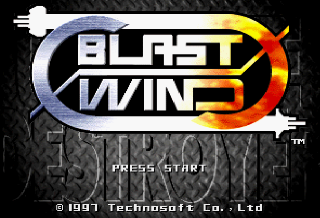 The name of Techno Soft is one that was and still is revered by the retro gaming community. A large reason for this is their awesome Thunder Force series but they are still known for a few other titles as well. One of these, however, is generally not Blast Wind which, while still a shoot 'em up, is a rare foray into vertically-scrolling territory for them. It was released exclusively in Japan and only on the Saturn (although an arcade version was apparently planned), which certainly wasn't unusual for Sega's planetary powerhouse, but it does mean there's a fair amount of kanji, including in the intro sequence. The premise behind the game is therefore something of a mystery to me (even the static intro images don't really help with that) but I believe it has some sort of environmental theme and a good deal to do with a creature/object/place called Gorn. Anyway, whatever it is, let's go kick its arse! 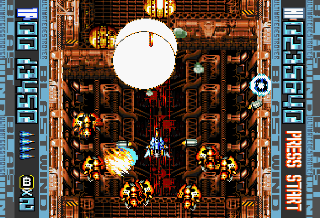 At first glance, Blast Wind appears to be a standard, sci-fi-themed vertical-scroller. Your medium-sized triangular vessel can fire a standard forward shot or a less-powerful homing shot, and also comes with a few handy super-bombs. Surprisingly though, there are no other weapons to collect with pick-ups restricted to cash and medals for bonus points, extra bombs, a spherical thing that offers slight protection from enemy shots, and the trusty 'P' which, in brief-but-powerful horizontal crackles of enemy-destroying lightning, increases the power of both types of shot and also add missiles to their yield too. The second player's ship does have slightly different weaponry (a twin shot, initially) but it makes little difference to the actual gameplay. 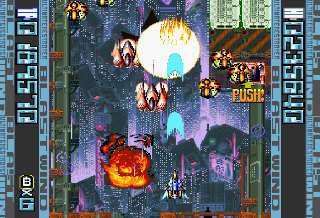 As well as having few things to collect, Blast Wind is also quite a short game with only six stages - Iron Skyscraper, City of Night, Antlantiss, Earthbreaker, Dimension Cave, and Gorn Last Battle - but there are two routes through them, each ending with a different boss, which can be chosen by 'touching' a button (or not) with your ship. This is more or less the only innovation in a game that is indeed pretty standard though. Even though it didn't receive an arcade version, the display has a fair-sized score panel on either side of the screen to emulate the look of such a release (and the feel too - the options screen has 'dip switch' settings!). I guess this lends it an air of authenticity but it also takes up space that could be displaying cooler stuff, even if only scenery, and the graphics that are present are of a mixed quality. 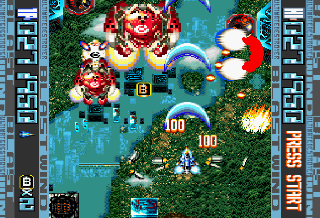 I'm not sure what half of them actually are but the backgrounds are detailed and varied. I like the third and fifth stages particularly, with the latter featuring some wibbly fire effects (albeit not as good as those in TFIII) but the sprites are less impressive. Some are superb and look very much like the complex, mechanical devices I assume they're meant to be, and there's some Mode 7-style scaling going on here and there, but some enemies just look like indistinct shapes (one example on the third stage are literally just featureless blue circles), and there aren't too many different examples either. I wouldn't go as far as calling Blast Wind an ugly game but it's too zoomed-in for an arcadey vertical-scroller and a good deal of it just seems rather messy and disorganised to me as well. The bosses are often the most visually striking aspect of a game like this but even they are disappointing here. Some are okay but many are bland and indistinctly-coloured, leaving little impression. 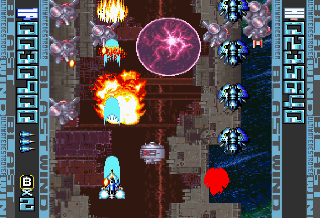 The actual stages are generally reasonable though, and with the explosions and bullets flying all around, the positives just about outweigh the negatives, but it's really not that flashy for a game of its age - Batsugun, for example, was released four years earlier and features far superior sprites and weapon effects. One area that did impress, however, was the synth-rock soundtrack which is superb. It does get somewhat drowned out by the loud spot effects but they can be turned off if you so desire. Either way, though, you're probably not going to get to enjoy it for long. As mentioned earlier, there aren't many stages but they're also rather short as well so, alternate routes or not, you're likely to see everything here in an alarmingly short amount of time. 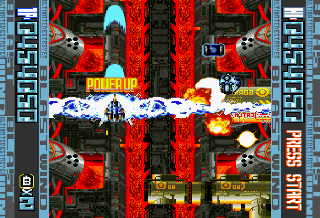 Technically, I believe Blast Wind is classed as a 'bullet hell' game but it's not nearly as crazy as most I've played, and it's not nearly as hard either - I guess you could call it 'danmaku-lite'. Perhaps it would even serve as an introduction to the sub-genre for newcomers. It's quite fair in that your ship is only partially powered-down after a life is lost but, despite the slow and slightly clunky ship-movement, it's still too easy. I got to the fourth stage on my first attempt and can now finish the game with relative ease, and that's unusual for an oaf like me. It probably seems like I'm really hating on this game but I have quite enjoyed playing through it, even if it was in less time than I expected (20 minutes in case you were wondering!) - I think it's just that I was expecting more from Techno Soft and their usual awesomeness. I blame the collectors - Blast Wind is a popular and desirable game in Saturn collecting circles but I can only assume that's more to do with its rarity and prestige (being a Techno Soft title and all) - as an actual game I must confess to being rather disappointed by it.