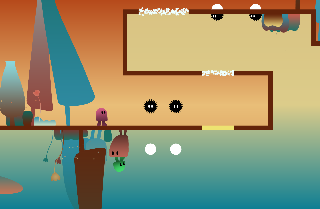 As a platform game fan (2D ones, obviously), it’s very pleasing for me to find so many new ones turning up in the world of homebrew and independent developers. This particular example is one I’d never heard of and just happened to stumble upon during a rare flick through the PSN Store. It is indeed a platformer, you see, but not a normal one. It was designed to be played by two, each controlling one of the titular characters - semi circular green and red creatures respectively - who must simply make their way from left-to-right through each of the surreal scrolling stages. The trick is, the 'platforms' in them consist of a single line representing the horizon. Both characters can walk and jump around at will, but they can also flip from one side of the horizon to the next by passing through wibbly sections called warps. 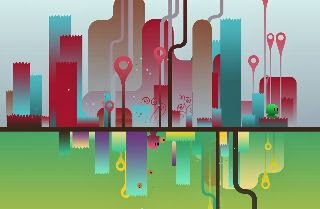 Gravity is reversed on each side of the horizon allowing ibb and obb to walk on either side, and the various enemies they encounter - mostly spiky black creatures - are dangerous on one side (spiky!) but vulnerable on the other (white and not spiky), and jumping on their delicate parts shatters them into diamonds which can then be collected. The enemies are often the least of your problems though, as the horizon is usually far from straight and it takes a bit of thought, as well as cooperation, to get both characters to the end. It can be played alone but you'll still need to guide both characters to the end simultaneously which can get quite tough, so it's best to play in co-op. It's worth it too - as well as being pretty original, it's also a lovely-looking game with cute characters and atmospheric music, and is an absolute joy to play through. Definitely one to spend more time on...