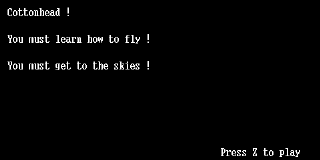 Although I've been playing fan-made games for a couple of years or so now, the homebrew scene is still one I know relatively little about. The regular competitions that are held, for example, are the province of far smarter people than me. They do occasionally yield a game that I somehow find out about, though, and Cottonhead is one such example which was created for the latest Ludum Dare competition. It stars a small cloud-like creature who's fallen to earth from his home in Cottoncity. Your job is to get him back, but first he must regain his ability to fly.

Our innocent puffy friend can move along the ground (he just kind of slides) and is quite adept at jumping but only the king can restore his ability to fly. This is done by collecting ten 'Magic Feathers' and presenting them to him. After that he can reach the portal back to Cottoncity but a barrier prevents him from passing. A nearby wizard will circumvent this problem for you, but only if you first collect five 'Wind Shells'. Aaaand... that's it - the entire game! Short and sweet for sure, but any good? Well, first of all, I don't know why Cottonhead is in such a hurry to escape from a world as pleasant and happy as this one. His ground-based surroundings are colourful, fairly interesting, and devoid of any malevolent creatures or anything that might do him harm.

There are a handful of occupants, however, who are apparently just going about their business and will speak to Cottonhead as he passes, such as the nice potato-farming fellow above, but their presence is inconsequential as far as actually playing the game is concerned. That absence of enemies obviously makes his job easier, and collecting the Wind Shells is a piece of cake since by this stage you can search anywhere without any problems. Finding all the Magic Feathers is a little more difficult - very accurate jumping is required to reach some of them - but this, too, is a task without too much challenge, and that means this adventure is, as indicated before, an extremely short one.

Indeed, I actually finished the game on my first attempt in only ten minutes, and a second play-through the next day took less than half that time! It is a very pleasant, relaxing experience while it lasts though. The tune that plays throughout is a good one and the aforementioned graphics are nice as well. What little game that's included here would be fantastic as a first level, perhaps even just a training level, in a much larger game - one that I would buy enthusiastically - but it's tough to even give this a review score really. I understand it was just made for a competition and wasn't intended to be a 'proper' release but cute platformers usually appeal to me and I was suitably intrigued by this one; it's just a shame there's so little to it. Please, Lonebot, make it into a full game with new levels and stuff - I'll even help you promote it!