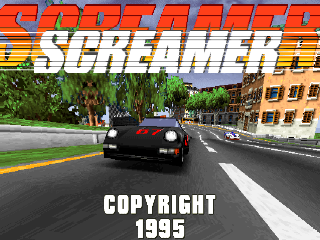 I've mentioned here several times that I've never really been much of a PC gamer but I don’t think I've ever mentioned why. There are two main reasons, the first of which is that I didn't even have my own PC until the mid-90’s. The time that I did finally acquire one, however, happened to coincide with the emergence of the super graphics accelerator cards like the 3DFX and PowerVR. These things cost a pretty penny themselves but PC’s powerful enough to take full advantage of them were also far beyond my reach, so about the only games I used my PC for were Solitaire and Freecell. None of this prevented me from hearing of the wonders of 3D-accelerated PC gaming though, and one game that seemed to get the most press in the day was Screamer. I've always assumed that, like many such games of the time, it was little more than a tech-demo which wowed gamers with its snazzy graphics whilst offering few gameplay-related treats, but I hadn't actually played it until the last few weeks thanks to the wonders of Good Old Games. Time now, then, to see if I was right!

It certainly seems like a tech-demo to start with - you're introduced to its snazzy 3D world by way of a Daytona-esque rolling demo over which the credits are displayed, and accompanied by a screeching electric guitar soundtrack. When the menu finally arrives, however, it presents five options: Normal Game, Championship, Special Mode, Network Game, and Options. The first of these offers a choice of a mere three circuit-based courses - Palm Town, Lake Valley, and Lindburg - and then a choice of twelve cars to race on them. Well, actually that's a lie as there are really only six distinct models which come in 'automatic' and 'manual' guises and, although lacking any official licenses or anything, they are quite blatantly based on real cars. They include the Shadow (Lamborghini Diablo), Tiger (the awesome Ferrari F40), Hammer (Bugatti EB 110), Rising Sun (Mitsubishi 3000GT), Panther (Porsche 911), and finally the aptly-named Yankee (Corvette C4).

Three courses will only keep you occupied for so long though, so the Championship should be your next port-of-call. It offers a points-based competition over an eventual six courses, first in the Rookie League. You need to place in the top three to progress to the next race and, if you win the league overall, you'll get to move up to the Amateur League where the opponents are tougher and the time-limits stricter. Win that and you move up to Professional, then the Bullet League where you must place first in every race. Finishing any of the leagues, however, will unlock the three additional courses - Palm Town Night, Sunbeach Hill, and Sandrock - which can then be used in any of the game modes. Races in Normal or Championship games are of course timed with various checkpoints around the course and are contested by ten drivers over 3, 5, 10, or 25 laps (the default is three).

Although not too difficult to begin with, the later stages of the Championship can be pretty hard going so it might be worth trying the Special Modes at some point too, and there are three options - Time Attack, Cone Carnage, and Slalom. The first of these is a standard race but with no other cars (besides a ghost car of your best lap) but it's only over one lap so you'll need to practise your starts as well as cornering and all that stuff. The other two Special Modes give you the chance to do just that. They, too, are only over one lap but start you with hardly any time, instead placing either rows of cones or a succession of gates respectively around the course - hitting/passing through these then gradually increases your timer for each 'hit'. As you might imagine then, these modes are basically training or practise modes. The last play mode - the Network Game - is, according to the instruction book, what Screamer is all about. Sadly, however, it seems that mode is no longer usable as the servers are now offline. C'mon man, it's only been 18 years!

Oh well, it may have been coldly abandoned by its progenitors but it certainly made a lasting impression on the gaming world. As mentioned earlier, Screamer was most famous for its graphics back in the mid-90's when polygonal racing games were first wowing the world. The PlayStation had Ridge Racer, the Saturn had Daytona, and Graffiti obviously decided the PC needed something similar. They were able to provide it when the necessary graphics accelerator boards had reached affordable (kind of) levels. The result was pretty much a combination of the two aforementioned games with graphics to easily match their console incarnations. The cars are easily recognisable and look fantastic, possibly more impressive than anything else in the game. You'll most often see them from behind, obviously - there are four views including bumper cam, inside car, just behind car, and further behind car - but even when spinning and crashing around they feature great textures and all look superb.

The courses are mostly a mixture of enclosed racing circuits and sections of 'open highway' so, although there's no normal traffic on them, it does mean you'll get to see some delightful views including serene woodland, gleaming office blocks, a neon funfair/carnival, numerous tunnels, castles, vast suspension bridges, canyons, and a dusty Texas-style oil field. The variety of scenery reminded me of OutRun 2 somewhat actually, and it's not just the odd feature either - some sections are jam-packed with stuff to distract you; there's even a night race with lights and reflections and stuff all over the place! The game engine shifts things around at a fairly impressive frame-rate and with a good draw distance too, and there is surprisingly little glitching (although things often get a bit ropey during the post-race replays). As far as I'm concerned though, the most impressive thing about the courses is their number; six isn't many by today's standards but the much celebrated Daytona only had three and Ridge Racer a ridiculous one (okay, one-and-a-bit).

So, it looks like Screamer's fame for its graphical prowess was well-deserved but I've always assumed that this was the extent of its achievements. To my surprise, however, since recently buying it I've found that it's actually a pretty damn good game too. To be honest, I've enjoyed playing it more than the 'cooler' Daytona, and miles more than the suck-fest that is Ridge Racer. This is partly down to the fine graphics, as well as the aforementioned guitar soundtrack that accompanies the action, but the most important aspect of a game like this is the handling. That's what lets down Namco's game in particular (in my opinion, of course - some people worship it!). Here, it's not nearly as smooth or refined as most arcade-style racing games of today, obviously, but it's still more than passable for me. Each of the cars have differing top speeds and ratings for grip and acceleration, and the differences are noticeable for the most part (even if not always accurately relayed on the selection screen), and they all drive at least reasonably well.

Braking into a corner will usually put the car into a slide but it takes some practise to do well as doing so while going too fast will often cause the car to abruptly veer to one side whether you're turning or not! Hitting walls or the scenery too hard will cause an almighty Daytona style super-twirly-flip but you're back on your way after a few seconds and most non-vehicular contact isn't too costly. The other cars, however, can prove mighty annoying. They're quite aggressive and hitting one (or being hit by one) will always see you come off worse, lose a lot of speed, and generally get passed by numerous other racers too. This was in fact the only thing I really didn't like about Screamer. It is, you see, one of those games where most of the racers stay pretty bunched up, and that means if you make a mistake, or even if another car just ploughs into you near the end of the race, you could quite easily go from 1st or 2nd down to about 8th just from one incident.

This type of thing usually gives rise to fury and violence when I'm playing a racing game but, while still annoying, it's not too difficult to make up the places here, and if you do manage to weave through the field without a problem, it's not too hard to stay there either. This, combined with the fact that the circuits are fairly small - generally laps take around the 40-60 second mark, means that you're likely to either finish near the top or the bottom of the field rather than battle up the ranks one place at a time. Despite all this, it's still a pretty easy game as you can just restart a race at any time if you're not going well, even in the Championship! Even if you manage to finish everything though, it's a more than decent enough game to return to time and again. I doubt many gamers could afford to play it properly in its day but, now that I've belatedly played it, it's surprised me a lot - firstly, it's actually enjoyable as well as looking good, and secondly, it still holds up superbly well today. My list of splendid arcade racers has a new but unexpected addition!