Next Generation Favourite Episodes - Season One

For some reason I seem to have few memories of my childhood. It wasn't a traumatic period for me or anything like that, quite the opposite in fact, I just don't remember much of it – just odd snippets here and there really. One thing I do recall, however, and recall fondly, is waking up early on Sunday mornings, cooking a couple of French bread pizzas, and sitting down to eat them while watching Star Trek: The Original Series (or just Star Trek, as it was known back then) on the little TV in the kitchen.

I hadn't been doing this for too long, however, before I heard something quite remarkable – Star Trek was returning, not only with new episodes, but with a whole new crew and ship! This series was of course the appropriately-named Star Trek: The Next Generation, set 70 years after Kirk’s adventures, and news of its arrival was met with optimistic curiosity from most existing fans, myself included. Without getting into a detailed analysis of the new show, I think I can safely say that it succeeded on most levels and brought many new fans to the franchise as well as satisfying all but the most stubborn of those that already existed. 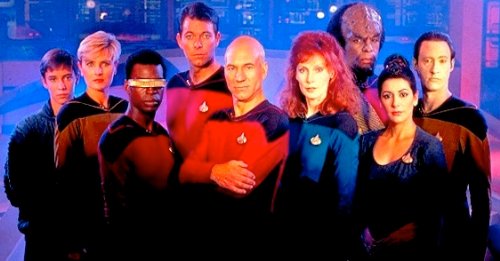 Winning the right to broadcast TNG here in the UK was BBC, and that meant no adverts – hooray! As I recall, new episodes were aired on Tuesdays at 7pm, and over the intervening years they've been shown on many other channels at various times in syndication too. Resultingly, I've now seen every episode numerous times, even if by accident to some extent, so when I recently decided to return to the show (as prompted by a recent viewing of the superb First Contact movie), I didn't fancy watching every single episode again - there are a good few stinkers after all (*cough*holodeck*cough*). I therefore decided to skip the ones I don't like, compile a list of my favourites, and detail them here, season by season! Here, therefore, are my favourites episodes from the very first season:

Where No One Has Gone Before (Episode 6) 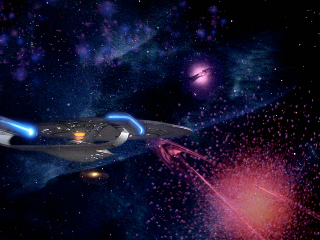 So, after a reasonable pilot, then a remake of an Original Series story, and then a couple of okay efforts, this was the first episode that really intrigued me. It features a cocky propulsion expert and his assistant, the Traveller, who can supposedly improve the efficiency of the Enterprise's engines. The resultant test, however, sends the ship millions of light years from home and into another galaxy. An attempt to get them back then sends them many times further away still, to the very edge of the known Universe where the crew start having strange visions. It's a concept that shouldn't really work, certainly within the confines of a single episode, and there are a few annoyances such as the fact that the crew don't really seem too worried by their predicament, but the representations of the distant universe are interesting and it's all pretty thought-provoking stuff too, so it's still an episode I can't help but like. 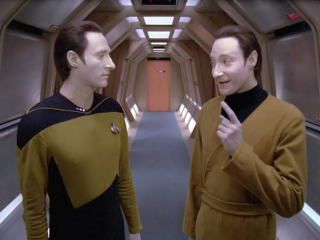 As was (and still is) typical of most shows with an ensemble cast, there are often episodes focusing on one particular character in order to flesh out their back-story a bit. This was Data's and was one that allowed us to actually see the place of his 'birth' thanks to the Enterprise's arrival at the planet where he was found and Geordie's subsequent magic-visor-assisted discovery of a secret laboratory. Not only does it appear that Data was made there, but there is also another (dissembled) android that looks identical. Data's doppelgänger is swiftly brought aboard, excitedly assembled, and activated, but he's not quite as identical in personality as he is in looks! So yes, it's predictably an 'evil twin' story, and those have potential in themselves, but the opportunity to watch Mr. Spiner over-acting his chops off as Lore makes this one a treat if you ask me! Although a glaring plot-hole at its conclusion does dampen the splendour somewhat... 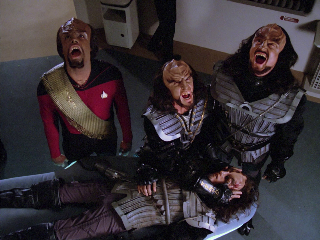 Well, we had the Data episode, and now here's the first one to feature Worf on centre stage who, as a human-raised Klingon, is a bit of a bumbling oaf when it comes to his own species. He's therefore more than a little intrigued when the Enterprise responds to a distress call sent by some freighter only to find a trio of mighty Klingon warriors aboard! The story they give doesn't seem very plausible though, and sure enough, while showing them around the ship, Worf discovers their true intentions which soon leaves him with a decision to make. Of course, it's pretty obvious which way he'll swing (eventually), but that doesn't make his quandary any less interesting to watch. This episode also, of course, marks the first appearance of the Klingons in the new series and gives us a bit more background information on the race in general as well as Worf's personal history. 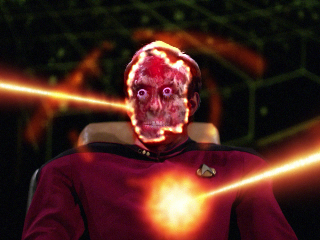 Most Trek episodes feature some sort of mystery, however complex, but this episode, as indicated by the title, is a little more cloak and dagger than usual. It kicks off right away, too, with the Captain receiving a private message on a special Starfleet frequency from an old friend who requests an equally clandestine meeting on an obscure old mining world. Once there he's initially greeted with suspicion but eventually told of a supposed infiltration of Starfleet Command by... something sinister. Whilst initially sceptical, he soon changes his tune when he encounters the wreckage of his friend's starship. Now convinced of the titular conspiracy, the Enterprise heads for earth to confront Starfleet Command and... there's freaky stuff going on indeed! While it may have been better suited to a double-length episode or even a movie, it's an interesting story and a nice change of pace. It's also perhaps the goriest TNG episode of all (although the effects have dated quite badly). It's not often Trek does horror though, and that alone makes this one noteworthy. And it has a spooky ending too (p.s. yes, I know the image is a bit of a spoiler but I couldn't resist!) 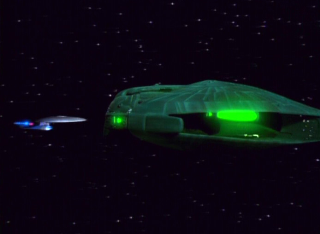 As if the previous episode wasn’t foreboding enough, the season closer is perhaps even more so. As indicated by the title, it concerns the buffer between the Federation and the Romulan Star Empire, aka the neutral zone, along which a number of Federation bases and outposts have been completely wiped out. Starfleet wants an investigation, but also a show of strength in the area, and that of course means the Enterprise. On the way there they encounter a 300 year-old vessel in which a curious Data finds several cryogenically-frozen humans who spend most of their time interrupting the Captain from his investigation and subsequent confrontation with... the Romulans! It's a strange combination of styles with the human passengers making a nuisance of themselves while the command staff try to solve the possibly-sinister mystery and, to be honest, I think it would've benefited from doing away with the 20th century buffoons and focusing on just the latter storyline which ends with an ominous warning from the Romulans in their brand-new and glowy green (not to mention enormous) Warbird, but it's still a mighty entertaining finale to a decent first season.

Look out for my Season Two picks soon!