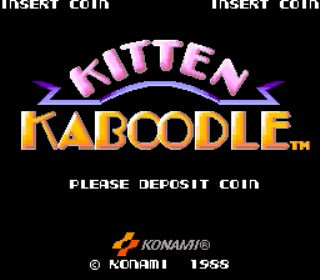 They may be a bit girly but kittens are still mighty entertaining little creatures. In fact, I'm surprised they haven't featured a lot more prominently in the world of video games, considering some of the other peculiar choices we've had for game 'heroes'. Konami obviously deemed them worthy of at least a try-out though, as can be seen from this Pengo-inspired action-puzzler which stars two of the agile fluff-balls. There's no story here that I can tell though, just an apparent need to guide them through fifty single-screen stages. Each predominantly features two things - blocks and enemies. The latter consist of insects (who wear lab coats, naturally), angry tomatoes, and bipedal crocodiles and they are all deadly to the touch, but our daring kitty is light of foot and can also perform a helpful leap over them or the blocks. Pushing the blocks rather then jumping them, however, can potentially squash an enemy, much like the Sega's penguin-starring game. 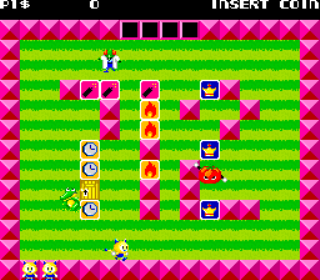 Unlike Pengo, however, squashing an enemy does not rid you of them for good, and defeating them all is not the objective, although you will need to take out a few of the bumbling oafs. The object, you see, is simply to unlock the exit door by collecting four keys, and these are found... you guessed it - upon executing an enemy. Any of the blocks can be pushed and will travel until they hit another block or a wall, sending any creature who may find themselves between these two points to an early grave (or a shoebox in the garden). To assist him in this process, the kitty can destroy blocks by jumping on top of them and there are also some special blocks too. They can still be used in the described fashion but, when three of a particular type are arranged in a line (either horizontally or vertically), they do other stuff: the blocks marked with a flame will send a horizontal column of fire across the screen which takes out any enemies it touches, the ones featuring clocks will freeze the enemies for a few seconds, those bearing sticks of dynamite will clear the screen of enemies, and lastly, blocks featuring crowns make the screen all flashy for a few seconds during which our brave feline is invincible! 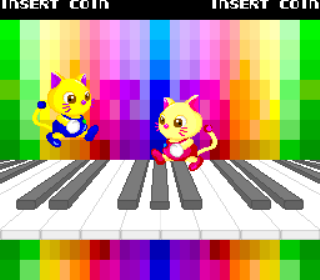 However, these special blocks are not necessarily found on every stage and sometimes there are more than three of a particular type too, but it's still only three that need to be pushed together. Whether you take out the enemies by squash, fire, or touch, you'll usually find coins or gems in the vicinity of their mangled corpses in addition to the keys, and these can be spent in the shop (tended by an anthropomorphic dog) that appears occasionally (seemingly randomly). Here you can buy new shoes (a speed-up), extra lives, bombs to throw at the enemies, or a mysterious blue box. If this isn't exciting enough for you, there's also an occasional gambling session (hosted by an equally-talkative rabbit) where you can place wagers on the outcome of a fruit machine (or 'slot' machine as I believe the Americans like to call them). All this gives you (potentially) is more money though, so if you can afford what you want from the shop anyway, you might as well not bother. 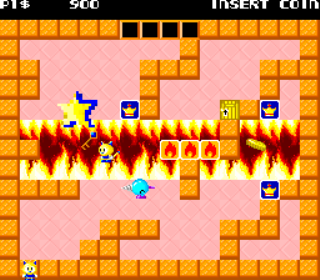 There's also another (and slightly stranger) bonus round which sees you competing against a pig to shove a row of bombs at each other before the timer runs out, but the main game is obviously where you'll spend most time and happily it's pretty half decent! The graphics could be mistaken for being a bit older than they are but the sprites are all appealing, especially the amusing cats which appear in a few short cut-scenes (like the one above), and the many stages and backgrounds are very colourful (often garishly so!). The music and sound effects are also catchy and add a lot of character to what basically amounts to a modernised (for its time) version of Pengo. Accordingly, there's a little more variety (notably the graphics and 'special' blocks) and it's also easier than the fun-but-frustrating Sega game. Things can still get rather hectic here, especially with two players on the go, but it suits a crazy game like this with its luminous graphics, and it's thanks mainly to these changes/additions that I prefer the game to Pengo. I imagine some may be put off by the rather childish characters but those who aren't should have a blast!