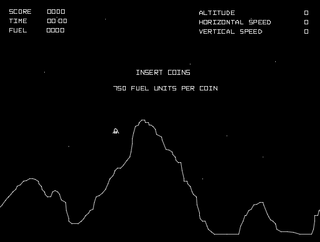 I suppose it shouldn't really be too surprising that the very earliest days of the video games industry were dominated by science fiction-based games such as Spacewar, Computer Space, and of course Space Invaders, and unsurprisingly pretty much all of these involved shooting stuff. This late 70's release from Atari, however, not only involved no shooting, but it wasn't even a science fiction game - it was based on science fact! Space exploration was no longer an emerging concept by this point but interest in it was still high, so what better way to further engage the imagination than to allow us to participate (kind of)? Indeed, as if it wasn't obvious from the title, Lunar Lander allowed budding astronauts to re-enact the Apollo moon landings by carefully steering the landing module down to a safe, umm... landing.

Upon starting the game, the lander is already drifting above the jagged surface of the moon. Each 'coin' will give you 750 fuel units with which you can turn the lander left or right and fire its thrusters to guide it down to your chosen landing site, and if necessary you can fire the thrusters at full power to abort a landing attempt. Several sites are offered with different points values depending on how small they are but you have to very careful at all of them - it's easy to crash the module and even touching down slightly too hard will damage it. If you land successfully you then get to try it again! Accordingly, there's not an awful lot to Lunar Lander and I expected to get bored of it very quickly. But I didn't. The sound is practically non-existent (were Atari going for scientific accuracy?) and the vector graphics are simple but do their job well enough, zooming in as you get closer to the ground, but Atari still somehow managed to create a fairly involving experience.

Despite the simple aesthetics though, Lunar Lander was still pretty advanced for its day and its legacy was felt for much longer than the game itself was played. It actually wasn't all that popular, but it did lead to numerous other vector games from Atari, the most famous being Asteroids. It also ushered in the 'gravity game' - the sub genre in which combating the realistic effects of gravity formed the basis of the play - examples of which are still appearing today. Most of those predictably involve shooting stuff and/or manoeuvring around intricate caverns though; this game asks far less of you and it is fairly easy with practise, but it's also very addictive, and if you have 'just one more go' you swear you'll be able to do a faster or better job! It's true that it's been superseded many times over now but I for one have enjoyed the relaxing change of pace it apparently still offers.