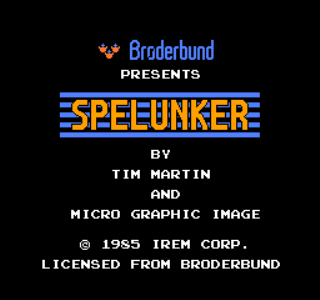 Games with funny names always appeal to me but what about the ones that aren't so pleasant? Well, I suppose the opposite must be true. Take this early NES game, for example. I've known of it for many years but I only recently realised I had made no effort whatsoever in finding out anything about it. I can only attribute this to its highly off-putting name which I had long assumed was created specially for the game. It turns out, however, that it's actually a real term used to describe 'people who explore caves' and, while understandably that may disappoint said people, it should in theory reveal much about what kind of game this is. It was first released on the 8-bit Atari computers by MicroGraphic Image, a new company comprised of three former VCS developers, and it does indeed involve exploring caves. Being from the era that it is, that most likely means a platform and ladders game, and that is also correct, but the intentions of our nameless 'spelunker' may not be as honourable as his real life counterparts. 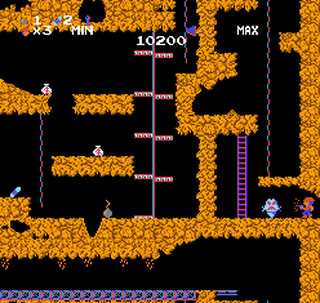 Indeed, as if you couldn't guess, your objective here is to strip the caves of as many of the shiny, valuable objects as you can find laying around them. The cave system that comprises the game-world is about two screens wide and divided into several sections which descend downwards without pause until you reach the 'fabulous treasure' in the final room. You start the game at the entrance of the cave on an elevator thing which you can move up and down a shaft on the left of the screen at will. It's best to start hunting for loot from the top of the cave down but you can't spend too much time exploring as you've got a limited supply of air. There are plenty of ladders and ropes to help our miner move around the numerous scrolling passages, as well as whirly platforms on conveyors, watery bits, and of course a mine cart! In addition to the treasure, which comes in the form of coins, money bags, and gems, it's worth looking out for air capsules (essential), keys (to open doors, believe it or not), bombs (which can remove occasional blockages), and flares (which scare away annoying, not to mention deadly bats). 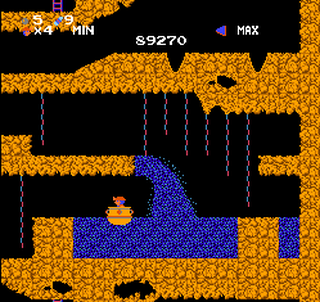 The pesky bats are actually one of only two enemies in the entire game. They hover in a particular spot, moving left and right slightly while pooping on you (I guess they were eating hot curries the night before). There are only handful of them in the whole game though. More common are ghosts which appear randomly and can move through anything while homing in on our hero and can only be stopped by the slow-firing flash gun he carries. Neither the bats nor ghosts are much more than an inconvenience though; the real danger comes from the hazards around the caves, such as steam vents and pot holes, but even more so from the main character's immensely delicate nature. Due to this, he is unfortunately unable to fall more than about five pixels down without losing a life - something made worse by the fact that his movement is completely inertialess meaning he can't walk across even the tiniest gap and will instead fall down to his death then as well. This is mostly manageable (after a bit of practise) while walking/jumping around the actual platforms but becomes a big problem when attempting to traverse the many ropes and ladders. 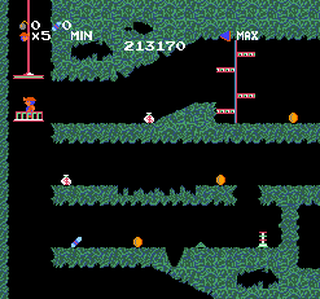 Helpfully, our unscrupulous friend will automatically grab any ladder or rope he passes - that's not the problem. However, if you want to jump sideways to a platform or another rope/ladder, as is often required, you'll need to time the press of both the direction and jump button perfectly or he'll just release his grip, drop downwards, and die. This is by far the thing that most lets this game down. The graphics are quite pleasant, though very repetitive since they are basically the same throughout your quest, and the music is the same, consisting of a catchy but repetitive tune which, aside from a jingle now and then (next cave section, arrival of ghost, etc), doesn't change. I was okay with both of these points but the poor controls make the mistiming of jumps and the subsequent wasting of lives a constant worry. Although ironically, or should I say strangely, the height of the character's jump is greater than the distance he can fall when not jumping, so it doesn't even make sense! 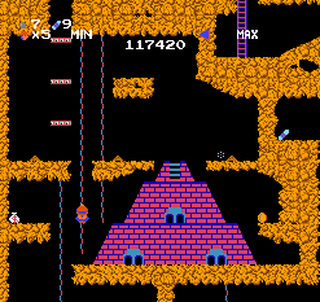 After many, many lives were lost, however, I discovered a probable reason for the game's presumably-intentional toughness - it's also very short! Though beyond my abilities, a quick check revealed that a speed-run of the entire game can seemingly be achieved in less than six minutes! Then, after a quick congratulations screen, the game just restarts in a different coloured and even harder cave (see above) of otherwise identical design, and supposedly does the same several more times if anyone is insanely skilled/patient enough to try and get that far. For me though... I did enjoy playing this unappealingly-named platformer in patches, and it is satisfying to do well at, but the simple fact is, if you are a highly-skilled player you'll see everything very quickly, but if you're normal like me you'll spend much more time frustrated and exasperated than entertained. Making a really short game and then making it hard so it lasts longer is one thing - I can understand that considering the year it was released - but at least make it tough through challengingly constructed stages rather than just crap controls and a nonsensical play-mechanism. Grrr!