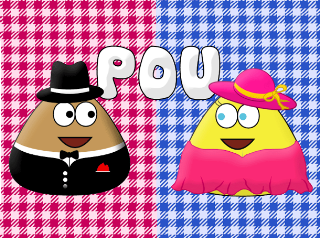 Although I have my favourite game genres like everyone else, I have at least played examples of near enough every type of game there is. One that I hadn’t until recently, however, was that of the 'virtual pet'. They seem to go through odd little spurts of popularity and have ranged from simple dedicated devices such as the Tamagotchi to much more advanced releases for computers and consoles such as Nintendogs. Whatever form they took, though, I hadn't ever really been intrigued enough to try any of them, but then I discovered one just a few weeks ago completely by accident and decided to give it a try. It was, of course, Pou who is a 'cute alien pet who loves to eat and play' and was apparently dreamed up by Lebanese developer, Paul Salameh. His creation certainly looks amusing/ appealing enough but I was still sceptical about the virtues of his 'game'. 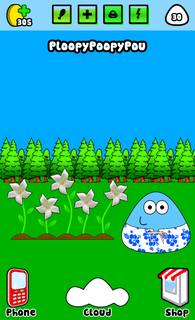 Luckily. Pou is free on Android (unlike those poor old iOS users - tee hee!) so I didn't have to gamble too much to find out if his cute appearance was backed up by anything else of note. When you first start, Pou is a goggle-eyed infant creature and you'll soon notice that he has four meters at the top of the screen. The first denotes how hungry he is, the next represents his health, then his happiness, and the last one shows how much energy he has. Your job, basically, is to keep all of these meters filled.

The first two require gold coins to buy food or health potions respectively, both of which are simply dragged to Pou's mouth. The happiness, or 'fun' meter is filled by playing with Pou (*ahem*). To do this you can simply ping a ball around for his amusement, but the preferable option is to play one of the twenty mini-games on offer which is also the primary means of earning more coins as well. Playing games makes him tired, however, and when his energy gets too low he will need to sleep in his bedroom which is one of several screens you can flick back and forth between. The others include the kitchen, which includes a fridge containing all the sumptuous foods and refreshing beverages you've bought for him, and the bathroom where you need to wash him when he gets too dirty. 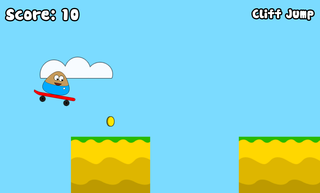 There's also a game room where you can play all the mini-games, and a hallway where you can talk to Pou (he just repeats what you say in a squeaky, high-pitched voice) as well as go outside where you will find his garden (complete with waterable flowers) and playground. The game room is probably where you'll spend most time though. Most of the games are for one-player (two of them are playable online against other Pou users) and all are quick and simple to play. There are variations on puzzle games like Puzzle Bobble and Bejeweled, a couple are based on non-video games like Connect 4 and Tic-Tac-Toe, there are some simple screen-tapping jumping/flying games like the skateboard game above, and the playground offers a football penalties game and a swimming pool float game. 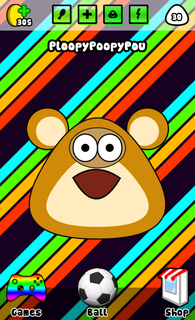 As you may have gathered, there's not too much originality with the games but they're well executed and addictive, and the better you do at them, the more coins you'll earn, although coins can also be earned for game-based 'achievements' as well as simply for eating/showering/sleeping/watering/etc a set number of times. Of course, the potential abundance of these coins would be frivolous if they were just for filling the fridge with various foodstuffs and the lab shelf with potion bottles.

Thankfully, Mr. Salameh thought about that and has provided a large amount of other stuff to buy with which you can customise Pou's house, garden, and even him! You can choose from millions of different wallpapers for each room and, outside the house, you can buy different flowers, customise the appearance of the house, and even buy new scenery to replace the default forest (see above). Personalising the look of Pou himself seems to be the most popular pursuit here though, and to that end you can change his body colour, eye colour, add wigs, glasses, a moustache, give him stickers (tattoos, basically), add lipstick, and dress him in all manner of outfits including suits, shirts (which look like Star Trek TOS uniforms), swim shorts, dresses, football shirts, hats, seasonal costumes (Christmas and Halloween, for example) and, most amusingly, animal costumes (witness the splendour of my Mouse Pou). 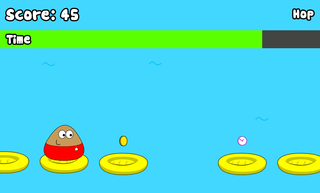 So, yes, it's all pretty silly stuff. As I mentioned earlier, I've not played any virtual pet games before so I don't really know if all this stuff is standard fare or not. I imagine it is but Pou certainly puts an appealing slant on the genre. Everything looks bright and cheerful and there are numerous catchy tunes to accompany the mini-games, and watching Pou grow and taking care of him is oddly compelling (and often amusing - feed him too much and watch how fat he gets!). It probably sounds immensely childish and it is - I'm don't doubt that's who it's aimed at - but I must admit to becoming quite taken by Pou. His ways are endearing and, at the very least, he makes bus journeys more enjoyable! Considering it's a free (and advert-less) download for Android users, it certainly doesn't hurt to give it a try. You never know, you might just make a new friend!