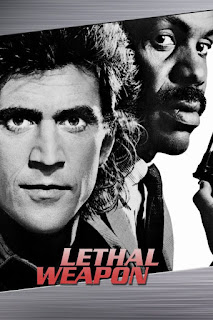 Although they had been around for much longer, I don't think too many people would disagree that action cop thrillers were the province of the 80's. The decade saw many classics but the first such series I personally encountered was Lethal Weapon, mainly because the first film was released when I was 12 but, owing to the 18 certificate it had received, my dad wouldn't let me watch it. This just made it more intriguing to me and I did indeed end up seeing it before I was actually 18, which made me feel like a grown-up, naturally!

It must've sounded pretty generic on paper - two detectives, Roger Murtaugh and Martin Riggs: one a respected veteran, the other a cocky, trigger-happy upstart; one a devoted family man, the other a recently widowed loner; each of differing ages, racial backgrounds, and personalities; chalk and cheese, basically, and forced to work together to solve a seemingly simple murder which soon snowballs into a major drug-smuggling operation. It wasn't an original premise - it had been done many times before in largely unspectacular fashion. What made Lethal Weapon such a success was more down to its casting. Whether intentional or coincidental, Danny Glover and Mel Gibson had a great chemistry together which not only made them a team to root for, but also made them more likeable individually as well.

This was all a long time ago now though, obviously. Cop thrillers are different these days, generally much darker and more realistic, and I hadn't personally watched any of the Lethal Weapon films for years so, when I recently found myself wondering whether they can still hold their own against today's heavy hitters, I thought I'd watch them all again and find out! Read on to see what I thought: 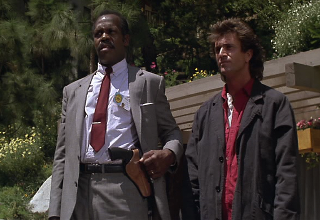 After twenty years on the force, Murtaugh is starting to feel his age so he isn't hugely enthusiastic to find he has a new partner in Riggs, who's been transferred from vice after acting increasingly recklessly on the job since the death of his wife. Their first job together is to investigate the murder of a hooker who was the daughter of one of Murtaugh's old Vietnam buddies who, it later transpires, has been working with several other ex-Special Forces guys to smuggle heroin since the end of the war, and rather a lot of it too. This puts our heroes up against some formidable bad guys, although Riggs, being ex-Special Forces himself, is more than confident about taking them down. This series début actually had a pretty small budget for a film of its type but director, Richard Donner, does a great job of introducing the characters and giving us just enough of their back-story/private lives which, combined with fine work from Gibson and Glover (particularly the former as the suicidal Riggs), makes them vulnerable and sympathetic at the same time. It is an action film though, so this stuff is sprinkled here and there between the numerous action sequences which are all superbly done. Definitely the grittiest and least comedic film in the series, but still possibly the best... 9/10 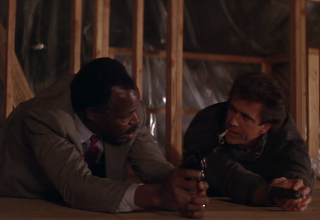 As would become customary with the series, this sequel throws us straight into the action with a destructive car chase across LA culminating in an upturned BMW and a 'trunk' full of Krugerrands. This points to South African involvement - a suspicion that soon proves accurate when Riggs and Murtaugh arrive at their base of operations only to be brushed off under the veil of diplomatic immunity which the Apartheid-era consulate staff are also hiding behind to smuggle drugs and ship the vast quantities of cash back home. Riggs and Murtaugh, of course, do not heed these warnings and it's after the latter has a night-time visit from the scariest 'diplomat' that we first meet Leo Getz, a crooked accountant turned whistle-blower who our two heroes are reassigned to protect. Since we're now familiar with the main characters, however, there's a bit more time for other stuff including some comedy which is the main purpose of Pesci's character. Rigg's even finds time for a bit of rumpy-pumpy with consulate secretary too, before he receives a slightly stronger version of Murtaugh's warning in the shape of a helicopter gunship! This second instalment had a bigger budget (though still tiny by today's standards) and accordingly the action is on a bigger scale but it's still a superbly-balanced film which is marginally my favourite in the series. Diplomatic immunity indeed! ... 9/10 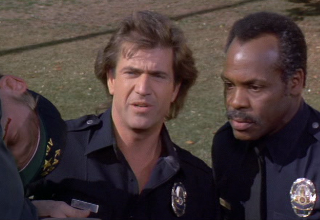 The third instalment has probably the funniest opening of the series which sees an enthusiastic Riggs and a more reluctant Murtaugh attempting to tackle a large building wired with an even larger bomb. Riggs gets it all wrong of course, which results in both of them getting demoted to uniform duties. It's not that easy to keep them out of trouble though, and, sure enough, they're soon involved in an armoured-truck heist, the perpetrators of which are armed with guns kitted out with special bullets stolen from a police lock-up. Assuming an inside-job, Internal Affairs sends Sergeant Lorna Cole (Rene Russo) to take over the investigation - something which Riggs and Murtaugh are reluctant to allow since it was 'their bust' and all. It does get them their detective badges back though, and they've soon teamed-up with the arse-kicking Ms. Cole who it turns out was correct - the perp is Jack Travis, a 'brutal' ex-cop-turned-arms dealer who somehow still has a valid police badge with which to gain entry to police stores and arms dumps, the results of which have seen numerous assault weapons, as well as the aforementioned 'special' bullets, circulate around the city. Despite containing a few touching moments though, and including most of the ingredients from the previous films - action, wise-cracking dialogue, even Leo, it's somehow slightly less... engaging than the previous films... 7/10 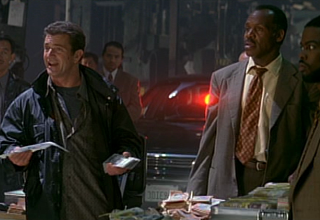 Well, the third film may have had the funniest opening but this final instalment has the most chaotic and downright destructive with its armoured, flame-thrower/machine gun wielding psycho! Like the third film, however, it's unrelated to the plot which is uncovered during a relaxing fishing trip when a large cargo ship almost knocks Riggs, Murtaugh, and Leo overboard. After pursuing the ship (with Riggs climbing aboard, shooting people, and blowing up stuff, obviously), they're alarmed to find the hold full of Chinese slave labourers. This points to Triad involvement and, sure enough, it’s not long before Jet Li shows up in his first appearance in a Western film, and what he lacks in memorable dialogue (or indeed any dialogue) he makes up for with moody facial expressions and twirly arse-kicking action. Also débuting is Chris Rock as an enthusiastic (and loud) detective, Lee Butters, who we soon discover is now Murtaugh's son-in-law after secretly marrying Rianne! That doesn't stop him from joining Murtaugh, Riggs, and Leo (who's now a PI) as they attempt to thwart Wah Sing Ku's (Li) plan to buy the freedom of four Triad leaders who are being held by a corrupt Chinese general. This all leads to the usual type of tomfoolery with a bit of chop-socky action thrown into the mix, but things are starting to seem a bit tired by now and it all generally feels less Lethal Weapon-ish than the previous films... 6/10

Alarmingly, despite the fact that I bought the fourth film on DVD – a seemingly modern technology – it's been a startling 15 years since we last saw a new Lethal Weapon film, although that's still much less scary than the 26 years since the first one appeared! In that time the genre has changed a lot but, as I've recently found, the series still has what it takes. The only thing that's really aged about the first film is Mel Gibson's hair - the story, the characters, the action... they're all still as enjoyable as the day I was finally allowed to see them! Despite its splendidness, my main interest in the second film was admittedly Patsy Kensit and her little boobies since I had something of a crush on her back then (before she got all the surgery) but it did of course turn out to be a superb sequel too, and remains arguably my favourite in the series (no, not just because of Ms. Kensit).

Ironically it's the two most recent instalments that have fared the worst. I suppose they've always been regarded as lesser entries in the series and on repeat viewings it's certainly a justified stance. The fourth film in particular, while containing most of the ingredients necessary, and being a pretty good film in its own right, just doesn't have the 'feel' of the earlier films. A joke in the film points out that even Riggs is "getting too old for this shit" by this stage, and indeed, he is starting to feel his age as much as Murtaugh was in the first film. Perhaps it was a sign that it was time to end the series. The final scene is certainly a fitting (if somewhat cheesy) way to end the series, but wait... what's that? Yes, there are in fact plans to 'reboot' the series, whether by an Abrams-style modernised remake or even a proper sequel with all the original cast. Should they make it? Probably not but I suppose it at least has the potential to be half-decent.

For now though, take my word for it and revisit these classics, especially the first two. Their popularity at the time may have led to dozens of 'buddy cop' films but none of them did it better than Riggs and Murtaugh...