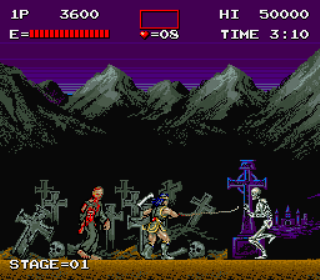 So there I was, messing round with MAME again when I selected yet another random, rather generic-sounding title to try. The resultant title screen was pretty cool and from there followed a brief intro which showed some girly getting kidnapped by a pesky Dracula-like nincompoop, and I also noticed that it was a Konami game. Hmmm, something about this was starting to seem familiar, but before I thought about that too much I started the game. At this point, a feeling of unbridled horror soon fell upon me like dark clouds casting their mighty shadows over a once vibrant landscape, but it wasn't the game's spooky horror theme that caused this; noo, this was down to the game itself which stunk like a garlic-riddled corpse. Intrigued by this badness, I then looked into it in more detail so I could know exactly what/who I was cussing, paying more attention this time. Then... egads! Sure enough, it was confirmed - Haunted Castle is actually a Castlevania game! 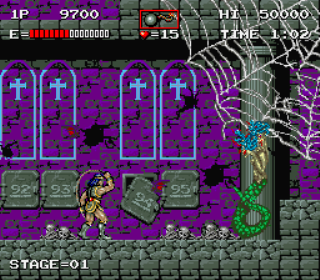 As someone who largely avoided Nintendo consoles until the mid-90's, one of several well regarded IP's I never got around to looking into properly is Castlevania. I know of their glowing reputation though, and I have played a couple briefly, which makes this effort all the more surprising. It takes the form of a scrolling whip 'em up and involves guiding a suitably heroic-looking fellow through hordes of skeletons, bats, and zombies with the object, presumably, of rescuing the aforementioned girly. So far, so familiar. Aside from some clunky controls and suspicious collision-detection, however, there's one big problem - it's ridiculously hard as well. Our hero (Mr. Belmont, presumably) can take a few hits but has only the one life with which to face the infinite enemies which require fairly precise strikes from his whip. Then I reached an insanely tough screen on which chunks from a castle wall fly across the screen, and it gets even harder from then on. When I eventually get around to covering the Castlevania series I'll take another look at this (once I've mentally prepared myself) but for now... uurghhh. And people whine about Ghosts'n Goblins being too tough? Holy crap, I hope the other games are easier!