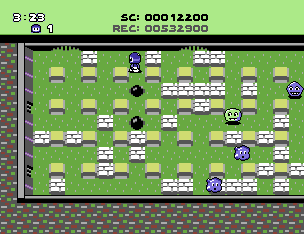 Who says social networking is a waste of time? It was thanks to one of my numerous C64-loving friends there that I found out about this splendid homebrew release which is, quite remarkably, the first time Bomberman has graced Commodore's mighty machine, as far as I can tell anyway. It's an unofficial release but looks every bit a product of the special laboratory in Hudson's secret volcano lair. There's a one-player game featuring 36 mazey stages where the object is to destroy the familiar-looking enemies contained within and, impressively, there's also a battle game for two-to-five-players! My only issue with the one-player mode so far is the infrequent appearance of power-up icons which, when combined with the loss of all power-ups when you die, makes the game pretty tough going. It's faithful in every way I can see though, including near-faultless gameplay and some fantastic music, and it could well prove an essential acquisition for C64 fans and Bomberman fans alike. I'll take a more detailed look at it later but for now:

See here for more info on the game or to buy the beautifully-packaged cartridge version.