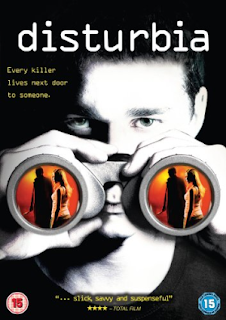 Tagline: "Every killer lives next door to someone"

Slasher films have always been pretty popular but they've never really been my cup of tea. Something else that I'm not too keen on is Shia LeBeouf who I found irritating in Transformers. It's therefore something of a mystery to me as to why I actually bought the splendidly-named Disturbia, which is supposedly an example of the former and stars the latter. Despite only having Michael Bay's disappointing monster robot mash-up to go by (which actually came out after this, but hey - I can't afford to see every film as soon as it's out!), he quickly proved to just be one of those actors I find myself naturally turned-off by. Here he plays Kale Brecht, a seemingly normal high-school student who is suspended from school and sentenced to three months house arrest for assaulting a teacher who made an insensitive remark about his father who was killed in a car crash a year before. 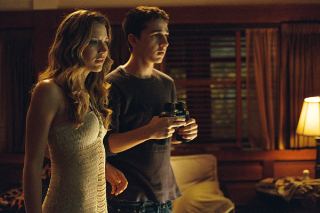 Although I think I'd rather enjoy three months of peace and quiet (finances-permitting), Kale soon gets bored of watching TV, playing video games, and generally larking around at home, especially when his mum (Moss) cancels his Xbox Live and iTunes accounts (which are apparently the only ways to use a console or listen to music). So he starts spending his days looking out of his window, spying on the neighbours, often with the enthusiastic help of his best friend, Ronnie (Yoo). Two neighbours in particular capture their attention: Ashley (Roemer), a recent addition to the 'hood who just happens to be a gorgeous, friendly girl around their own age, and the charismatic Robert (Morse), whom Kale observes with a curiosity that soon turns to suspicion. Could his polite, charming next-door neighbour really be a serial killer? 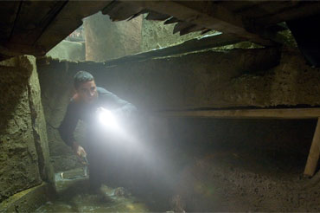 Well, he was never likely to just be a normal, everyday guy I suppose, or this would be one of the most boring films of all-time (and have a stupid tagline), but at the same time, despite being labelled as a slasher film and featuring a good few bodies, there is surprisingly little blood 'n' violence and even less actually killing. LeBeouf is less annoying than normal though, and his binocular-time, spent first with Ronnie and then with Ashley (who gives up the goods rather easily) is more engaging than you might think. It's also pretty predictable though, especially the final act which somehow manages to go over-the-top whilst simultaneously losing much of the suspense generated up to that point. There are numerous good parts which just about outweigh the bad but don't watch it expecting to see a string of people getting killed in creative and gruesome ways or you'll be disappointed.