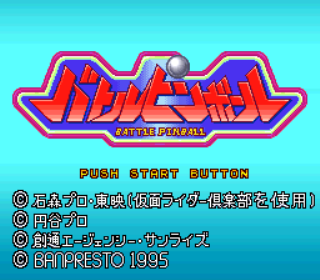 Have you ever found a particular genre of something ruined for you by its finest example being so superior to all other examples? This happened to me with sci-fi TV shows - I'm a big Babylon 5 fan but it's so good that most other sci-fi seems crap in comparison and my ability to further enjoy the genre diminished. The same sort of thing happened to me a little earlier than this with video games too, or more specifically, pinball video games. Having discovered the Crush series only a few years after getting into gaming to begin with, the supreme awesomeness of the games in question greatly reduced the appeal of pretty much all other examples. Therefore, to this day, almost the only pinball videogames I've played have been Crush-related ones. This kind of closed-mindedness won't do here at Red Parsley though, so I've decided to start looking at a selection of alternatives. The first one I've chosen, based purely on the splendid cover-art I accidentally found, is Battle Pinball which is apparently part of a sizeable series itself.

Unlike the Crush series, however, the Great Battle, or 'Compati Hero' series is not comprised exclusively of pinball games. Amazingly, it actually consists of over thirty games released on systems from the Famicom right up to recent years with the PSP, and covers near enough all genres at one point or another. One thing they all have in common is the inclusion of SD versions of popular Japanese characters, Ultraman, Kamen Rider, Gundam, and Fighter Roar, and accordingly it is they who star in this Super Famicom exclusive which features four pintables - one for each character and presumably based on aspects of their various anime/manga, TV shows, films, etc (which I'm sorry to say I know bugger all about - a subject to research for another time, perhaps). Nonetheless, my noobishness on the subject aside, each table is four screens high with three 'normal' sections but also a 'boss' section at the top. Three of the tables flick back and forth between these screens rather than scroll while one does scroll for some reason - not sure what that's all about but luckily it doesn't cause too many problems!

Scrolling or not, the bottom three-quarters of each table are all filled with normal pinball-type features - bumpers, chutes, ramps, springers, targets, switches, etc, as well as a good number of creatures and characters (presumably taken from the same source as the main characters themselves) - some of them help you, others hinder you, but near enough everything in sight has the ability to increase your points as you would expect. However, accumulating points is not the main objective here. There is a story of sorts, as relayed though an intro sequence and the odd cut-scene, which I don't understand (since it's in Japanese, obviously), but it must involve some sort of quest to take down an evil creature and his minions as the very top section of each table features a boss battle. Defeating each of these muttonheads results in the completion of their particular table and allows you to move on to another. If you manage to defeat all four bosses, a final one-screen battle against the ultimate boss awaits who has his own set of flippers at the top of the screen. The first one to score four past their opponent wins!

So yes, unlike a great many other examples, this is a pinball game that has a definitive objective and an ending, but that doesn't mean there aren't ample opportunities to amass points during play. The tables feature all sorts of things to aim for to boost your score and there's also a one-screen bonus table where it's possible to get an extra life (ball) by getting the ball in a very small target. I guess it's a bit of a shame that the tables end but you could always just not beat the bosses on purpose! Either way though, I imagine this game was/is a godsend for fans of the characters involved - I almost wish I had been following their exploits for years so I could more fully appreciate the nuances of this game; I don't doubt that the themes, characters, and music are taken from or inspired by such media. The themes are quite interesting too - Ultraman's table seems to be set in a city (complete with footy pitch), Gundam's (the only scrolling stage - I still can't work that out) is set in space, Kamen Rider's is based in some dusty, grassy area (Arizona? A terraformed Mars, perhaps?), and Fighter Roar's takes place underwater.

Each of them features the same authentic pinball-ish sound effects as well as superb tunes unique to each, and the tables look wholly outstanding, with a perfect choice of colours, lots of variety, and great detail. Everything is unique to each stage (they even have different flippers) and the aquatic table even has a lovely shimmering water effect too! Crucially, this technical splendour extends to the ball movement as well. It's not quite as flawless as Devil's Crush but I still felt more than confident pinging it around and the fantastic variety and quality of the tables makes it a pleasure to do so. The only possible criticism here is that it's perhaps a little too easy to play for extended periods, but when it's as enjoyable as this it seems a bit stupid to complain about it! Happily then, it seems the amazingness of the Crush series hasn't rendered all pinball games sucky in comparison. Battle Pinball doesn't reach the heights of Naxat's best, but if that game is too gloomy for you, even gamers who've never heard of Ultraman and friends could do a great deal worse than trying Banpresto's game for more light-hearted pinball action.