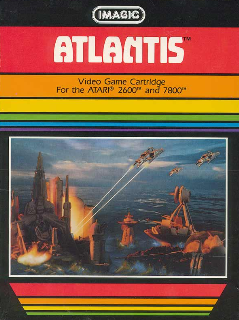 I'm sure we've all heard the stories of the long lost city of Atlantis and, while the ancient civilisation may remain a mystery to us idiotic humans, it seems that someone has found it. The evil race of warriors known as the Gorgons has sent a fleet of spaceships to destroy the fabled city so it's now up to you to stop them "before it becomes a watery grave!" and consigned once more to hearsay and legend. What this amounts to is a fixed-screen shooter which places you in command of Atlantis' last defences consisting of three cannons - one in the bottom-middle of the screen which fires straight up, with the other two in the bottom-left and bottom-right of the screen which fire diagonally into the sky above the city. Most of the Gorgon ships do little beyond flying back and forth across the screen inviting you to take pot-shots at them. Each time one of the pesky things gets across unscathed, however, it returns at a lower altitude, and then again. If you let any get too low, that's when they can do some damage... 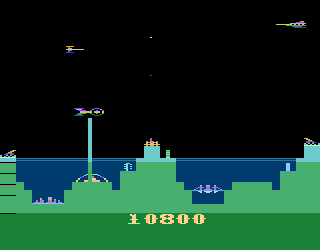 As far as this game is concerned, you see, the city of Atlantis is apparently made up of seven installations (not including the left and right cannons). All but two of these are beneath the water but they're all vulnerable to any ships that get too low as this is when they're able to deploy the scary 'deathray' they all carry. Each time this is fired it destroys one of the installations and the middle cannon (known as the 'Acropolis Command Post') is usually the first to go, making it more difficult to shoot down the rest of the ships, although you do get more points for shooting ships with either of the 'Sentry Posts' on the left and right of the city. The Gorgon ships attack in waves and there are three types, all of which are visible in the screenshot above. The smallest of these is known as the 'Gorgon Bandit Bomber' and, as well as being worth the most points, it also wipes out all other on screen enemies when hit. It's possible to regain lost parts of the city (including, helpfully, the middle cannon) at the end of a wave, too, by surpassing certain scores. 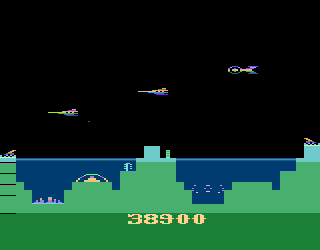 There are few objectives in games of this era that prove more inspiring than saving a legendary city from destruction, but sadly it's a never-ending task which most likely means it will end up in ruins anyway. There are four game variations in total which include an easy version of the game for beginners, a tougher version which disables the middle cannon, and a two-player game which gives each player control of one of the sentry posts, but the default game is the 'proper' one which gradually speeds up the movement of the enemy ships the longer you last. The graphics and sound remain the same throughout - the latter merely consists of a basic shooting noise and a couple of explodey effects while the former features a reasonable enough cityscape and nice, colourful enemy ships (which explode in small-but-satisfying showers of pixels), but the 'sky' could've been a bit more interesting. It's not a particularly original game, playing a little like Taito's arcade classic, Colony 7, which itself is a cross between Space Invaders and Missile Command, but like many such games it's also great fun and rather addictive too! Another VCS classic :)