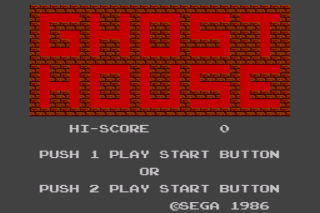 You know, it's funny. In all the years I've owned a Master System, which is now over 25 long years incidentally, I don't remember ever owning a game on the Sega Card system (which I swear I remember being called 'Smart Cards' but I guess that's irrelevant). One of the more famous examples is Ghost House which is actually a slightly inaccurate title as it's apparently set in Count Dracula's mansion! Not only that but it seems Mick, the player character who looks like a small boy, is a descendant of the fanged one himself and is seeking to 'inherit the family jewels'. To do this, however, he needs to dispose of the mansion's current host who's still alive and kicking. This is where things get a bit confusing as there are six mansions in total and each one houses five Draculas! It seems our impish hero has his work cut out for him then. 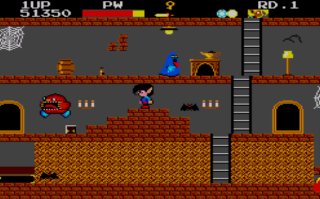 The houses are a fair old size too. Each scrolls for quite a distance before looping back and they are also three screens high – upstairs, downstairs, and basement. The five Draculas are locked in coffins so your first job is find a key which is held by a random enemy. The most numerous of these are bats which flutter around at various heights but there are also blue sheet-ghosts things (which are apparently 'Death' himself), annoying jumping, orange, fire-breathing ogres, and spooky mummies. They can be dealt with either by punching them or jumping on their heads but they're also infinite so as soon as you've found a key you should look for the coffins. One can be found upstairs with two each on the other two floors. Once a Dracula has been unleashed he swoops back and forth alternating between bat and human forms. If you manage to hit him enough times (five punches) he's history. Then you need to look for another key and repeat the process! 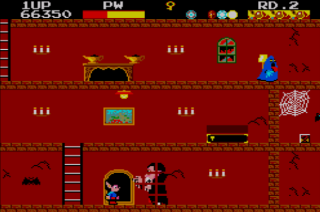 Once all five Draculas have been vanquished (the last of which is the 'true' Dracula) you need to look for the 'magic door' to exit the stage, and then it's on to the next house. Even getting this far will probably take a good few attempts though, as Ghost House is a pretty tricky game! Any contact with the enemies will deplete your health bar and there are a good few other hazards to look out for as well, including arrows and knives flying across the screen and pits of fire, all of which also cost you health, and there are also invisible trap doors and spider webs which ensnare you for a few seconds. It's not all bad though. If you manage to jump on no less than sixteen arrows you'll gain around thirty seconds of invincibility (although you may well lose more energy than you save trying to achieve this!) and jumping on a knife will bestow you with five such stabbing utensils for use on the enemies. 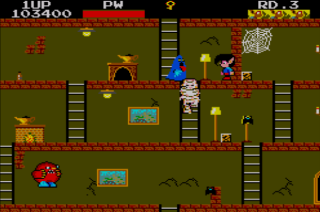 Perhaps even more helpful are the light bulbs. Jumping up to head-butt these will freeze the enemies for a few seconds - something which happily even works on the Draculas and makes besting those over-dressed buffoons significantly easier. Plus, each time you do defeat one, he'll leave behind a heart which completely refills your health. Despite all this though, it's that constant stream of enemies that proves the biggest challenge, especially as finding and/or reaching all the coffins can sometimes be difficult. Each section of the various houses are more-or-less three-tiered and connected by ladders, but the arrangement of the platforms gets ever trickier and some coffins are even behind walled sections. The only way to reach these is to make use of the mirrors which teleport you to another in a random location on that stage. 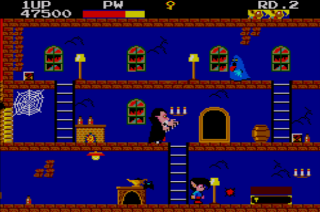 Every time Mick is touched by an enemy, though, he gets shunted backwards. This seems fair enough (but still quite annoying) on the first stage but it doesn't take long before it starts becoming a real pain. Enemies are destroyed when you touch them, whether you punch/stab them or not, but only the bats and deaths can be defeated by a single hit. Even as early as the second stage you can often find yourself getting shunted back and forth between two stronger enemies, especially when fighting a Dracula. It's not unusual to lose half of your energy at once in these situations, and if you're on the bottom tier of either the top or middle section of a house and you happen to land where a ladder leads to the screen below, you'll fall down to that screen; when you then go back up, you'll have to start the process again. As you might imagine, this can be really annoying and is the game's biggest problem for me. 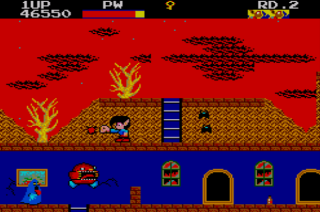 Having said that, there are quite a few partial energy-refills around and Mick can crawl along the ground which helps him to avoid at least some of the bats, so with practise the annoyances can be limited. The presentation is rather average, although not too bad for a Sega Card game (which was the budget range, effectively). The six houses are made up of the same basic objects and laid out in similar ways but the colour schemes are different from one to the next (in most cases) and the sprites aren't bad either, particularly the amusing-looking orange ogre (although you'll soon get tired of him following you around!). Likewise, there aren't too many different tunes but the main theme is among the Master System's better efforts and goes some way to making Ghost House a fairly enjoyable game to start with. It does get repetitive though, and can be very frustrating at times. It's one of those games where the idea of playing it is quite appealing, but then I actually play it and sooner or later get very angry! I suppose it's not a bad little game but it's hardly essential either.