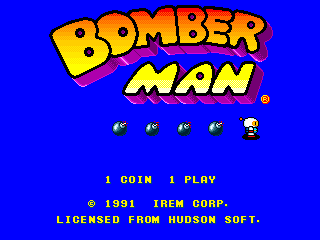 Many gamers mainly associate the Bomberman series with certain consoles, generally the PC Engine or SNES I suppose, but there have been a handful of arcade-based instalments in the long-running series. This simply-named example is the first of them and was handled by Irem. Its quality should therefore be assured and, being an arcade game, its content should be too. Sure enough, 'inserting' some coins presents the choice of a one/two player Battle Game, or one/two player Normal Game. The latter has always been my preference though, and was therefore the first mode I tried here. It starts with a short intro explaining how Bomberman and King Bomber became the 'best robot team in the world'; that is, of course, until King Bomber 'suddenly attacks mankind', leaving Bomberman (and his brother, Bomberman 2, who's red, incidentally) to 'defend the people'. Which apparently involves clearing a number of enemy-ridden mazes.

The stages are grouped into fives and feature the usual mix of 'soft' and 'hard' blocks. There are no exits this time though - defeating all the idiotic enemies is enough to advance to the next stage at which time you'll no doubt notice that... all your power-ups are now gone. Gah! To compensate for this, at least half of all the soft blocks conceal icons of some sort and the boss stages, which occur after each fifth normal stage, feature a sprinkling of similar icons around the screen so it doesn't take too long to resume full-scale arse-kicking in either case, but there isn't a great selection. Luckily, those included are mighty handy - extra bombs, extra blast range, speed-ups, remote triggers, and temporary invincibility (and also a few bonus point thingies). The same few icons are available in the Battle Game which is great but also means they still aren't as chaotic as later games yet. Other than that though, they're pretty much the same as usual.

The graphics are understandably the most impressive of the series to date but I really like the style too, which is familiar but easier on the eye than ever before as well - everything is colourful, detailed, and neat, and includes some nice patterned backgrounds and superb enemies, although the entire cast of characters is new, as is the pleasant and catchy music, probably owing to Irem's involvement. Some of the new enemies are a real pain in the arse actually, and do make things a little more difficult than previous games - only natural considering it's a coin-guzzler I suppose - but the fact that you only have to kill the enemies to finish a stage means it can be quicker to advance through the game as well. With that in mind, this is an appropriate and enjoyable instalment which proves to be a perfect choice for those looking for a (supposedly) quick five or ten minute Bomberman fix.